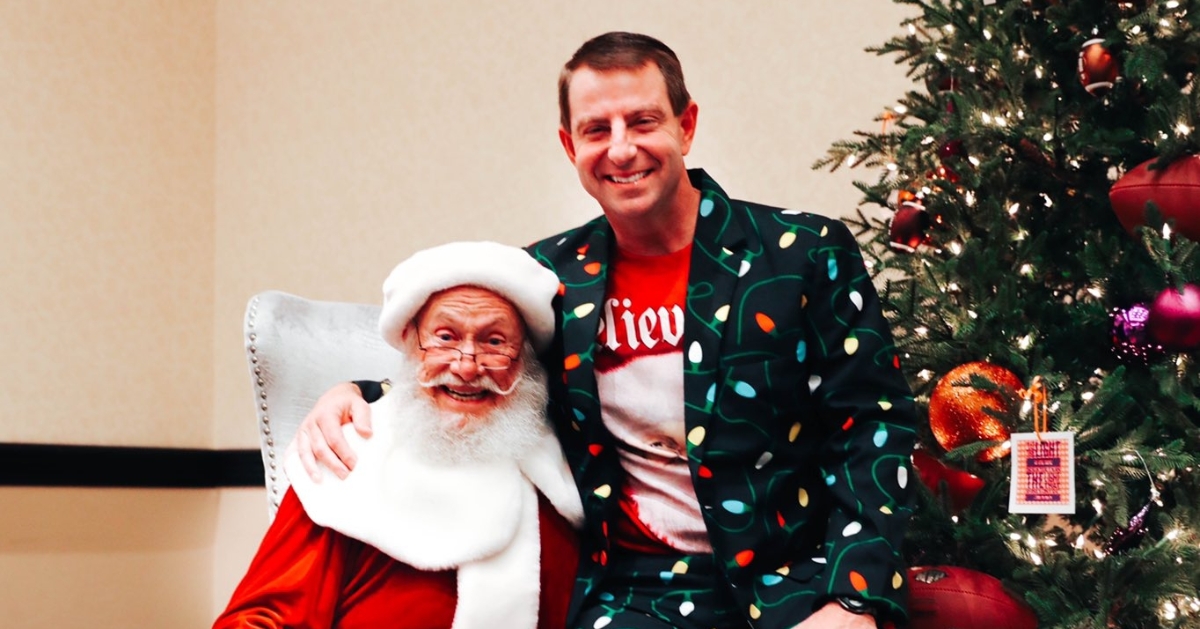 Swinney poses with Santa at the Fiesta Bowl this week.

SCOTTSDALE, AZ – Little ole Clemson has one of everything, and that’s enough to recruit at an extremely high level.

Head coach Dabo Swinney loves to use the phrase “little ole Clemson” when talking about Clemson and the Tigers football program, and when he took the stage at Thursday’s media day at the Fiesta Bowl, a national writer couldn’t help but ask about the origin of the phrase.

Swinney was only too happy to oblige.

“I've been saying that for a long time because we are little ole Clemson. If you've been to Clemson, we've only got about 14,000 people in our population there, and -- I don't know -- about 20,000 students maybe,” Swinney said. “So it's probably the biggest stadium per capita in the country for the city that it's in. It's just little ole Clemson. It's just a small town, a small college atmosphere but yet you've got this 80-plus-thousand seat stadium and 150,000 people roll into the town on the weekends. It's incredible. But then they all leave.”

During the week is when little ole Clemson takes shape.

“Monday through Friday, we kind of have our own world. It's just a small -- we have one of everything, two of a few things. We've got a Starbucks,” Swinney said. “You know? We've got a Walmart, a Publix. We have about one of everything. So there's just a simplicity there that's unique. I think there's a quality of life in Clemson that's really special. So we're just little ole Clemson. We've been that way for a long time. But it's something I used to talk to the team about all the time 11 years ago when I got the job. I'd say we're little ole Clemson, but we've got everything we need to compete at the highest level. We're going to build a big program, and we've been able to do that.”

The Tigers are able to recruit at a national level.

“We don't invest a lot of resources, so to speak, just, like, coming to Arizona. We just go wherever. There's no real set place,” Swinney said. “We talk about building the inside out. And we're going to recruit Georgia and North Carolina and South Carolina and Tennessee, Virginia, Maryland, Florida, Alabama. That's kind of our area if you will. But what has happened is, like, we just signed a pretty good quarterback out of California. And we weren't recruiting him. His coach tells the story, I think he had a million offers as a sophomore or something like that, but the coach was talking to him about is there a school out there that you like? And he was like, ‘Yeah, Clemson.’”

Swinney said today’s athletes – including California quarterback D.J. Uiagalelei – have only known Clemson as one of the nation’s elite teams.

“You think about it. He's 16 at that point. The last nine years, he's grown up watching little ole Clemson. So, we get a lot of that, where these kids have grown up watching us and they're interested,” Swinney said. “So, his coach actually reached out to us. And Coach Streeter looks at it, and goes, ‘Wow. Yeah, he's pretty good.’ So, we don't really just, like, go say let's go recruit all of California or Arizona or whatever, but we do track who we think are the best players and reach out. But what has happened is a lot of these kids have reciprocated.

“So, we signed Joseph Ngata out of the Sacramento area last year. So back-to-back years, we've signed a kid from California for the first time in the history of our school. And so, it's not about just going and getting guys; it's still, for us, about the right fit, just fitting our program, the core values of our program, the expectations and value of education, those types of things. And it's been pretty cool to be able to see our reach grow. So, yeah, we'll come to Arizona. We'll go to Alaska. We've got a young man coming from Canada this year. So, I'm super excited about that.”