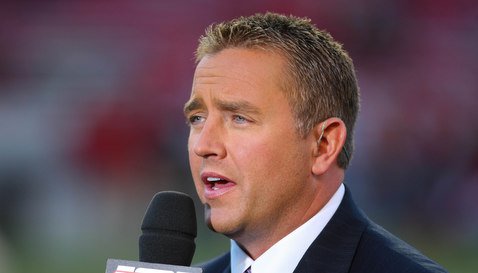 ESPN’s Kirk Herbstreit reminded the fans Friday afternoon, however, that the team that plays the best defense will win the game.

Herbstreit and ESPN’s College GameDay crew are in Clemson for Saturday morning’s show, and he will call the game along with Rece Davis when the teams kick off at 8:22 Saturday night. Davis, Herbstreit and Desmond Howard met with the media Friday afternoon in Harcombe Dining Hall, and Herbstreit said he paid attention to Venables’ group during Thursday’s practice.

“It's the first time I've ever come to a Clemson Thursday practice and immediately gone to the defensive side of the field to see Brent and their plan because I'm anxious to see if there's a defense schematically that's designed to stop Lamar Jackson or if there's a coordinator you'd give credence to it would be Brent based on his success,” Herbstreit said. “I can't wait to see the plan he comes up with and how he's able to take away Lamar Jackson or if he's able to. It's like watching a video game right now. Everybody is saying Michael Vick, but I remember a guy named Michael Bishop at Kansas State that he reminds me of when the athletic quarterback was just starting to become trendy. Michael Bishop did things you just kind of scratched your head and that's what this guy is doing. I'm fired up for both defenses but especially Clemson's."

Louisville torched Florida St.’s defense two weeks ago at home, but Howard said he wasn’t sure if comparing Clemson to FSU was valid at this point, saying the Seminoles have been “hot garbage.” 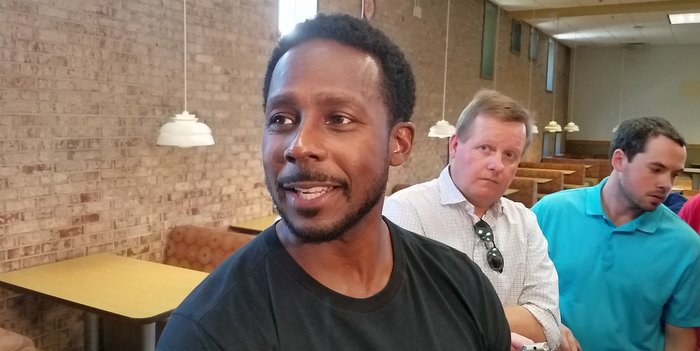 "They did play Florida State earlier this year. I don't know if Florida State's defense is that good,” Howard said. “The way I looked at them was this; they played two meaningful games: Ole Miss game and the Louisville game. If you break those games at the half, so now you got four halves, they only played one good half of football. The other three halves, they were hot garbage. I don't know if you'd really put that defense up there to measure your offense against."

Howard then quoted an old ESPN line when talking about how the Clemson defense can contain talented Cardinal quarterback Lamar Jackson.

"You don't stop him; you only try to contain him. When you have a guy with such extraordinary athletic ability who touches the ball every play you're not going to stop him but try to contain him with that front seven,” Howard said. “That's going to be their job. They're going to have to be very disciplined and depending on what Brent Venables does with his packages and whether it's a nickel or a dime, they're going to have to be excellent tacklers in space. The only thing a coordinator can do is put you in the position to make a play. After that, it's all on you."

Herbstreit said Clemson has to win the battle in the trenches.

"I think that could be one of the determining factors in the game if Clemson plays well. If you watch the Florida State game, they were really neutralized up front, and then it gave Lamar Jackson a chance to get running downhill,” he said. “If you give him a chance to get downhill and build up his speed, I don't want to say it's impossible, but it makes it very, very challenging. If you can collapse the pocket you can get to him before he gets through that initial surge, you've got a chance. Dexter Lawrence and Christian Wilkins, these guys are as good as there are in the country. They've got to win up front. If they don't win up front, it's going to make it really hard to stop him."

Herbstreit then said that he has been impressed with what Venables has done with the Clemson defense despite having to replace Shaq Lawson and Kevin Dodd.

"They basically have two new starters, and if you look at what they had last year compared to what they have this year, it's not as if they lost a couple of guys and it's like, 'Oh my gosh, what are they going to do now? They've lost two first rounders.' I think they have equal, if not better talent. It's just a matter of building continuity,” Herbstreit said. “I think it's a great reminder, while we get caught up in watching the ball, what you do up front dictates whether or not you'll have success.

“If one guy doesn't make the right call and it effects the communication, somebody is going got shoot a gap and it's going to blow the whole play up. To me, it speaks volumes if they're not communicating and get confused on a blitz or whatever it might be, as good as Deshaun Watson and Wayne Gallman are, they're not going to be able to make a play. I can't sit here and predict that they'll figure it all out Saturday, but at some point, they will. Once they figure it out and get on the same page and communicate well, all these concerns are going to go away. They're going to run the ball, and they're going to have play action opportunities. For me, it's not a matter of if, it's more of a matter of when and maybe that'll be on Saturday night."

Herbstreit said Clemson’s defensive excellence over the past few seasons has been overshadowed by the prolific offense.

"Nationally, I think people get excited about points. I watch so many teams and so many games; I love defense,” he said. “I don't know if people nationally respect or admire what Clemson has done these last three or four years defensively because their offense has been so dynamic from the years Chad Morris was here, then he left. Then, of course, Deshaun Watson coming in with Jeff Scott and Tony Elliot. I mean the offense is just doing things, probably breaking every record in Clemson's book. Meanwhile, the defense loses guys to the NFL early for the last three years, and somehow they get better. I think it's an amazing story and it's a credit to Dabo and his staff, the way they recruit, and what Brent is doing that side of the ball."

Rece Davis jokingly said that some form of sabotage might be Clemson's best defense.

"I would suggest letting the air out of the tires on the bus, kidnapping him. I'm kidding. If anybody is equipped to slow him down - I don't think anybody is going to completely take him away - but it would be Clemson," Davis said. "They have difference makers in the front with Christian Wilkins, who I think is one of the best football players in the country at any position and Dexter Lawrence who is going to be that. They've got veteran guys at linebacker. They're assignment sound...Because of the speed they have and the soundness in assignment and Coach Venables and how good they are, I think they have as good of a chance as anybody. He's still going to break somebody's ankles and make some plays. You're not holding him to seven."

He then followed that up by saying he expects nothing but the best from Clemson Saturday night.

"I sort of get the sense from Clemson's players that they've had just about enough of how great Louisiville is and how great Lamar Jackson is," Davis said. "All of that praise is well-earned and well-deserved, but it doesn't mean that Clemson has to accept it. I think Clemson will play its best game Saturday night."

He then made a case for Clemson being one of the best settings in all of college football.

"Passion. They love their team. They love the Tigers. They love college football,” he said. “They love tailgating. They love the celebration of the fall. Whether we are here or not, you guys are here for six or seven Saturdays every year. You could make a real strong argument that this is one of the best settings's for football in the fall. We're just happy that we get to come and be a small part of it. You never take that for granted. We feed off of their energy every time we come here.

"There are some weeks you're doing it in front of 8,000 or 10,000 people, and there's an energy you feed off of it. There are some weeks you have to manufacture that energy because the crowd is kind of flat for whatever reason. At Clemson, it's never really felt that way. They are just so amped up and excited. Whether it's the rain or playing around in the mud, or the guy who is half-naked and is on somebody's shoulders, or just the overall passion and support of the team. It's really hard to say just one thing stands out. Remember that one time there was a tropical storm or that it was raining like crazy? I'm thinking that they're all going to leave, but they didn't go away. They were having fun in it. These people celebrate college football, and they love their team. We just happen to be here on a Saturday."