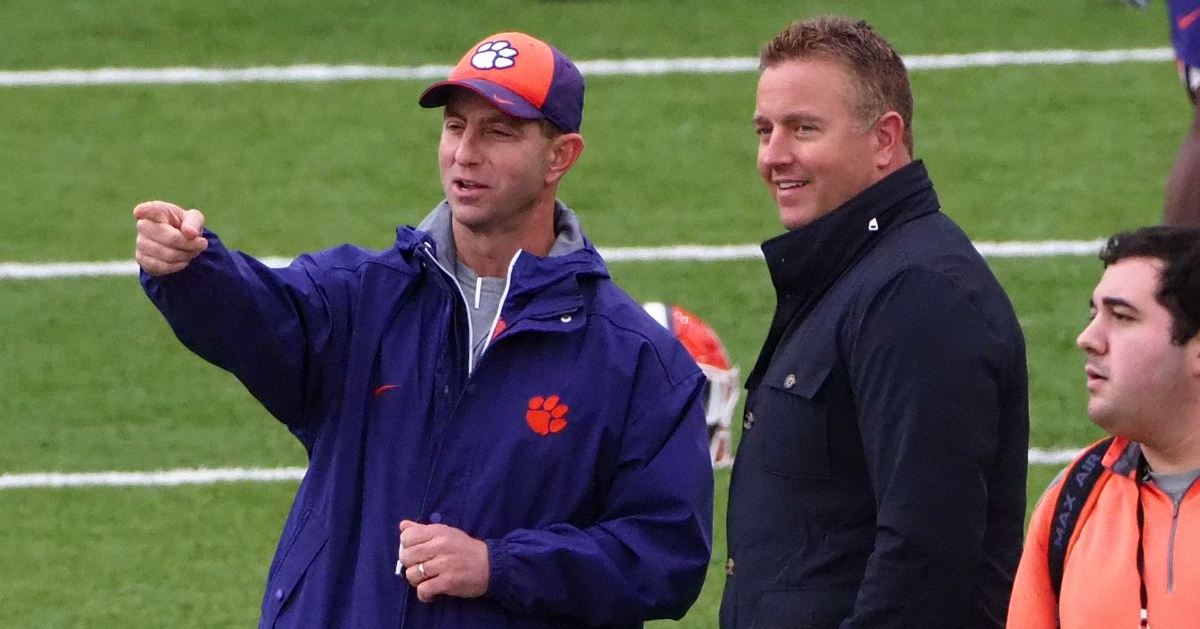 Herbstreit thinks head coach Dabo Swinney and No. 5 Clemson will be in a bad mood Saturday. (Photo: Kelley Cox / USAT)

ESPN College Football Analyst Kirk Herbstreit thinks No. 5 Clemson is going to be in a bad mood Saturday night in Raleigh.

The defending national champions have won 24 games in a row, are beating opponents by an average of 32 points and have held opponents to less than 300 yards of offense, yet the College Football Playoff committee debuted Clemson at No. 5 in its initial rankings Tuesday night.

When Clemson takes the field at 7:30 p.m. the Wolfpack – and the college football world – are sure to see a Tiger team anxious to prove a point.

Herbstreit said past accomplishments can’t be taken into consideration when trying to decide this year’s rankings.

“When I evaluate a team, I don't really look at 24 in a row, I don't really look at Alabama and all their National Championships, I'm just looking at what they're doing this year and I think the committee is trying to look at just this year,” Herbstreit said during a conference call Wednesday afternoon. “We kid Joey Galloway every year because we give our own top four rating and every week he has Clemson at one and even after the North Carolina game he had Clemson at 1 and we're like, why do you have Clemson at one and he would say, well they're the defending national champs and they haven't lost a game so I have them at one. And again, it's subjective, he's entitled to his opinion, that's the way he does it.

“The committee clearly does not do that. They look at 2019 strictly with the nine games that we have to evaluate and that's all they're looking at. So I think right now this ranking will provide motivation for Clemson, I think this team, I, you know, you imagine they're going to go out Saturday, no matter who they're playing and in this case that would be North Carolina State and they're going to show up probably in a bad mood and anxious to prove to people that they're the best team in the country. And I would expect nothing less from that, from a mentality standpoint with the remainder of the season that they have.”

Much of the national narrative has been that quarterback Trevor Lawrence and the Clemson offense have struggled for much of the season, but Herbstreit isn’t buying it.

“Well see, I don't know if he's really struggled the way maybe the narrative is. He's made, I think Dabo said he's had seven or eight bad plays on the whole year,” Herbstreit said of Lawrence. “Where you go back, he's a human, you go back you look at the film, he's a true sophomore and you say, oh, man, what was I thinking there kind of thing, you learn from it, you move on. But he's still having a monster year. He's got 20 touchdown passes he'll probably end up with well over 30 maybe 35 to 40 touchdown passes on the year. He's running the ball better this year. So, I don't personally buy into his struggles, I mean I think he's made a few bad decisions but what quarterback really doesn't.”

From the ROY Bus to creating the 'us against the world' mentality, Dabo Swinney is a master at creating a chip, so seeing the Tigers debut at No. 5 in the rankings, might just make him the happiest coach in the Top 10.

“I'm calling their game Saturday and I was on a call with him and, man, he is exactly why I said the happiest guy is Dabo Swinney and I don't mean happy as in the ranking, happy as in he doesn't have to say anything,” Herbstreit said. “How many times can you be the defending national champion and have arguably one of the greatest seasons in college football history and not be talked about the following year? I mean think about that. I don't know if that he's ever been done. And so I think he really takes offense to the fact that Clemson accomplished all that they accomplished a year ago and they bring back a lot of firepower, even though they lost a lot of great defensive linemen, a lot of great defensive players, but he thinks that this team, if you look at the numbers, is defensively better than they were a year ago and he thinks that at this point in the season the way Trevor and Travis and the receivers are playing as they get ready for the home stretch of the season he thinks they're better offensively than they were a year ago.

“And yet because they had a close call against North Carolina it's almost like well Clemson is not who we thought they might be and I think he really resents that sentiment. So to meaning when I say that the happiest guy in the world is Dabo Swinney, what I meant kind of being sarcastic was, man, he's the defending champ and they put him at 5 in the first rankings and he's undefeated and they have one close call against North Carolina, seven of the nine teams they have beaten by 30 or more and he thinks he has a better team this year than maybe he had last year."

All of the drama adds a little bit of juice to November.

“So that's why it just adds a little bit of juice to him and to the practices and to the focus to try to say, okay, that's what you think, kind of thing," Herbstreit said. "Even though if Clemson wins out, there's no, there's really nothing to it, I mean they're going to the playoffs if they win their next few games and win the ACC championship. They're in. But I think he feels disrespected and I think he's fighting for his players and fighting for his program and I don't blame him. I think he's got a very good point.”