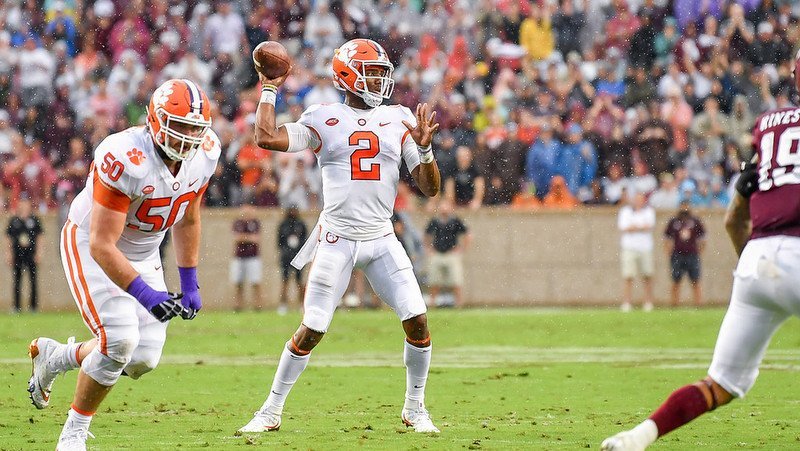 CLEMSON – Kelly Bryant has been praised and ridiculed and glorified and vilified, so when his veteran presence helped steer No. 2 Clemson to a 28-26 victory at Texas A&M last Saturday night, he could be forgiven if he wanted to thumb his nose at his doubters.

He didn’t. That isn’t the way Bryant operates, and he said his confidence never wavered.

“I already had that confidence in myself. There were always questions brought up to me about my game,” Bryant said. “People saying I can’t do this and I can’t do that and I just stayed the course and continued to grind. Just do my job and being the leader of this offense. Just finding a way to get the job done has been the identity of this offense.”

Bryant sat out the first two series of the second half after the coaching staff threw freshman Trevor Lawrence into the ring, but Bryant patiently waited his turn.

“When you play on the road there can be a lot of ups and downs, especially against a tough team like Texas A&M,” Bryant said. “You’ve got to give credit to those guys, they made plays as well. Communicate on the sidelines and making sure the guys stay up. When we were going three and out I was just keeping everybody engaged and making sure the morale was up on the sideline.

“When coach told me he (Lawrence) was going in, I knew what the situation was. Coach told me to stay engaged and make sure I was getting the plays calls and to stay ready to go in. You never know depending on the situation if I was going to get thrown back in. We’ve done a good job of making sure we are ready and locked in when the opportunity presents itself.”

Head coach Dabo Swinney says the game is a testament to Bryant’s focus and commitment to his teammates.

"Yes. That kind of speaks for itself. Everything in life is how you respond and he has responded well,” Swinney said. “Both did some good things and both did some bad things. I thought his leadership and his toughness down the stretch were awesome. It was what we needed in that moment. We're up 21-6, then they score in two plays and we go right down the field and answer. We have a two-touchdown lead going into the fourth. We couldn't hold it. We didn't complement each other well. We picked each other up well but didn't complement each other well. Kelly did a good job of playing well, being confident, focused and composed. He has been a true example of staying focused."

Bryant said he relied on his experience to help him navigate the ups and downs of the game.

“Definitely, I watched it my first two years and being thrown in the fire now and lean on those experiences and helping those other guys as well,” he said. “We’re an experienced team and we’ve been there and we know what types of games we are going to be in.”

He then said he takes a moment during the game to relax and has breathing exercises that help him stay focused.

“It relaxes me and calms me down. Especially when something good is going or when something is not going so good on the sideline,” Bryant said. “Calming myself and getting my feet back under me. Even off the field when I’m getting ready for interviews, just taking a deep breath, just to relax me and feel more at ease.

“I try not to make it more than it is, but you know it is a competition at the position. You know I just try to not let it overwhelm me. That’s why I just do a lot of breathing and it really just calms me down and helps me grow as a person and a player as well.”