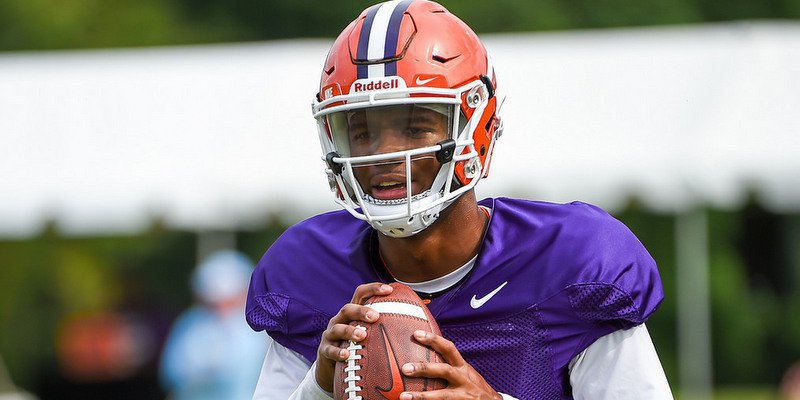 Bryant's first phone call was to his parents

CLEMSON Kelly Bryant is excited that he’s been named as the Tigers’ starting quarterback, but he knows there is still work to be done.

Head coach Dabo Swinney told the media after Monday’s practice that Bryant has had the best camp out of all the quarterbacks, and a smiling Bryant met with the media Tuesday under a tent following practice in Jervey Meadows.

Bryant said he knows he has to keep showing the work ethic that won him the job.

“It feels good. All the work that I have been putting in since I have been here, I feel like it is paying off,” Bryant said. “It is still a long way to go leading up to the game. This game is about performance. I am going to have to perform every day on the practice field and also in games to keep being the starter. It’s an honor, but like I said, work still needs to be done.”

He learned about his spot on the depth chart from Swinney.

“Coach Swinney grabbed me after the scrimmage (Saturday) and told me. Then Coach (Brandon) Streeter and I had a one-on-one and he told me as well,” Bryant said. “It is an honor for them to finally say it. There is still work that needs to be done. I am happy to be in the position I am in right now. I just have to take advantage of each opportunity I have.”

Bryant knows he has to maintain the coaches’ trust, but wanted to use Tuesday night to relax before today’s start of classes.

“I feel like I have been improving every day. I have been doing everything that has been asked of me and more,” he said. “Like I keep saying, there are still things that need to be done leading up to the first game. I am going to go back in and kick back for a bit. We've got school tomorrow so I am going to iron my outfit for the first day of class and get ready.”

“I don’t want to get complacent. I want to stay humble. Like I said, those guys in the room, they want the position too and it is still going to be about my performance each and every day,” he said. “There is a good environment in the quarterback room. We are all good buddies off the field and we all hang with each other in the facility. There is no tension in the room and it is a good atmosphere.”

Once he learned he would start, Bryant ducked off by himself to break the news to two important people.

“I called my parents and talked to them a little bit. They were happy to hear the news,” he said. “They have been pushing me as well, you know, to not get complacent and keep the mindset that I have had throughout camp and spring ball like I have something to prove.”

“I have definitely heard from Woody Dantzler,” Bryant said. “He’s been in my ear all spring and summer leading up to camp. I was actually going to hit Deshaun (Watson) up after practice and catch back up. I have seen Tajh and talked to him a little bit.”

Boyd had one piece of advice that Bryant took to heart.

“Be you, the same thing that everybody else has been saying. Just be you. Don’t try to be like him or anyone else. Just be Kelly Bryant. Play your own game,” Bryant said.