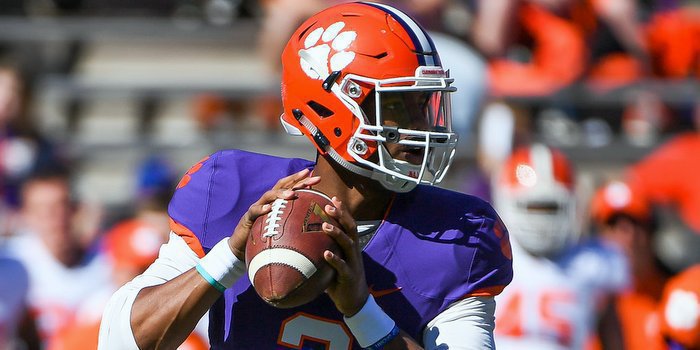 Bryant sets up to pass earlier this spring

CLEMSON – Spring practice will resume next Monday after a long layoff for spring break, and junior quarterback Kelly Bryant will walk out onto the practice field as the starter.

It’s a job he wants to keep, but Bryant told TigerNet that he knows it won’t be easy. However, he knows what he has to do to stay out in front of Tucker Israel, Zerrick Cooper and Hunter Johnson.

“I’m trying to make the most of my opportunity,” he said. “Just trying to stay consistent. Everybody is out there competing. I’m feeling very confident in myself through these eight days but like I said, it’s just about staying consistent.”

There are a few other areas he knows need to see significant improvement.

This is the first spring he doesn’t have Deshaun Watson or Nick Schuessler leading the way, and he acknowledged that things were a little strange at the start of practice.

“At first it was kind of weird. These last two springs, having them out there, if we need to ask something or want to learn something they’re right there,” said Bryant. “Just taking all that I’ve learned from them two, it’s really been a special unit, and now not having them, the roles have switched.”

Bryant sets up to pass earlier this spring "

Watson did leave Bryant with one piece of valuable advice.

Co-offensive coordinator Jeff Scott detailed what he likes about Bryant through the first half of spring practice.

“Number one is the confidence and the way that he carries himself and everything, but also I will say it is the way he is getting rid of the ball on time,” co-offensive coordinator Jeff Scott said. “A big part of our passing game is timing – quick game, drop back so many things have to be thrown on time. I think because he is confident in knowing what to do and where to go with the ball and those types of things, he is throwing the ball on rhythm and making some really nice throws.”

The Tigers ended the first half of spring with a scrimmage inside of the Poe Indoor Practice Facility, and Bryant completed 7-of-13 passes for 91 yards. He completed 4-of-5 passes, including a 39-yarder to Hunter Renfrow, on a late touchdown drive against the number-one defense.

Bryant said he wants to take the momentum from the first half and carry it over into the second half and the spring game.

“I’m getting that swag back that I had in high school and getting my confidence back up that is the biggest thing,” Bryant said. “It has been just eight days so how are you going to perform after you get back from break and have been off for a week? So that is what I have to do. I will let the coaches make that decision and I will control what I can control.”