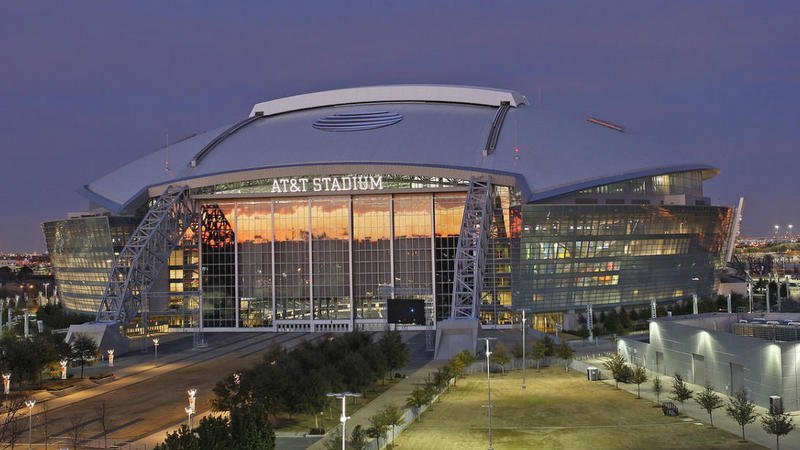 CLEMSON – Clemson held a College Football Playoff Media Day Tuesday inside the indoor practice facility, and each time AT&T Stadium was brought up to a player, a big smile broke out. It’s not just the fans that are excited to see what Jerry’s World is all about.

No.2 Clemson takes on No. 3 Notre Dame in a College Football Playoff semifinal on Dec. 29th. The game will be played in AT&T Stadium in Arlington, the home of the NFL’s Dallas Cowboys. Construction began on AT&T Stadium in April 2006 and was completed in June 2009, at a cost of $1.3 billion.

As one of the largest domed structures in the world, the stadium has a seating capacity that is expandable to more than 100,000. AT&T Stadium is the home of one of the largest High-Definition video boards on earth that measures nearly 60 yards in length, stretching from one 20-yard line to the other. Suspended 90 feet above the playing field, the video board weighs 1.2 million pounds. The venue's retractable roof soars 320 feet above the field and emulates that of Texas Stadium, the Dallas Cowboys previous home.

The roof has the ability to open or close in just 10 minutes. The stadium's two end zone doors can be

opened or closed in six minutes. They, too, rank among the largest in the world. The exterior of the stadium is covered with more than a half-million square feet of glass and stone. The amenities the stadium has to offer include more than 300 suites, 3,500 television monitors distributed throughout the nine-story structure, eight acres of outside entertainment space in the two end zone plazas, as well as the six end zone platforms that can host pre-game functions or increase the stadium's seating capacity.

Stadium capacity in the college configuration for the Goodyear Cotton Bowl Classic is 71,998. AT&T Stadium's all-time attendance record for a college game is 90,413 and was established by Alabama and Michigan in the 2012 AdvoCare Classic.

Senior tight end Milan Richard has seen it but never been inside.

“Yeah, I am excited about playing there,” Richard said. “I've never been, but I've driven by it a couple times but I've never been inside so I'm definitely excited to go out there and check that out. Dallas is a cool place. I have some family in Dallas, so excited to get out there.”

Right guard Sean Pollard likes the fact that the Tigers will get to practice inside the stadium – at other bowl trips, the team has practiced at sites other than the bowl site.

“I've heard a lot of great things about it. Just seeing on TV, it seems pretty cool,” Pollard said. “Hopefully I get to see Will Spiers fire one off the scoreboard for entertainment purposes. It’s cool that we actually get to practice there and not at some weird sit. It should be a little different because we’re all used to practicing at some little school. I like the fact that we can get used to the field and get used to the atmosphere.”

Right tackle Tremayne Anchrum likes the chance to play in an NFL stadium.

“Playing in Dallas, that's a dream and you know, it's not something you get to do every day or every year,” Anchrum said. “So, it's a rare opportunity that we're going to take advantage of.”

“I can’t wait,” Higgins said. “The Dallas Cowboys are my family’s favorite team, and they are all excited because this is their first trip out there. It should be fun to get out there and see what the stadium is like.”

Punter Will Spiers wants to take aim at the scoreboard.