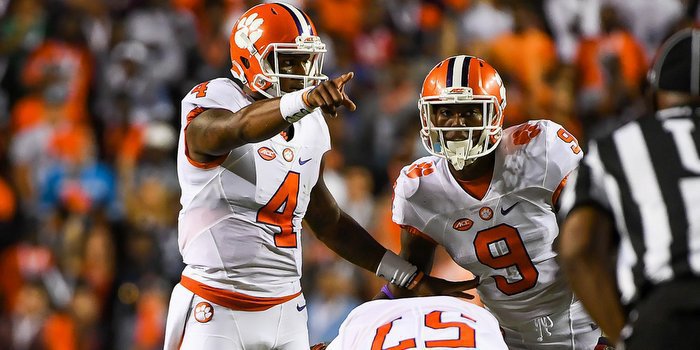 Watson and Gallman are averaging five less carries per game

CLEMSON – The Clemson rushing attack made major strides last season, finishing 21st nationally in rushing offense at 233 yards per game on 45 attempts per game. For the season, the Tigers averaged just under five yards per carry.

The running game has been stuck in neutral for most of 2016.

Both players are averaging five carries less per game than last season.

Co-offensive coordinator Jeff Scott spoke with the media Monday afternoon in the WestZone, and he said it’s easy to point fingers at the offensive line.

“I think it's more than just the offensive line. People are dedicating more guys to the box,” Scott said. “Offensively, as coaches, what we have to do is figure out what are they trying to do to stop it. Are they going to take away the running game? Then we have to throw it. Sometimes as coaches, it gets a little frustrating because you want to run the ball. But really, if they are going to have extra hats in the box, you've gotta throw the ball. And that's what we did. We threw for over 300 yards last week.”

Scott said he thinks the offensive line has played better than people think and won’t be an issue going forward.

It doesn’t get any easier for the Tigers this week – Louisville ranks 13th nationally in total defense and Clemson has scored a total of 45 points against Todd Grantham’s defense the last two seasons.

“Very disruptive,” Scott said. “They’re not just going to sit back and play base defense. They’re going to move a lot of guys around. You have to be prepared for the different blitzes and the different looks you’re going to get. His guys always play physical, and all those guys are very active — great effort, physical to the ball and really make you have to work the length of the field.”

The Cardinals return eight starters on defense, and Scott said outside linebacker Keith Kelsey is the leader. Kelsey, a first-team All-ACC selection by the media in 2015, currently ranks second on the team with 27 total tackles.

“Keith Kelsey is the heart of the defense,” Scott said. “He has a lot of experience. Great player. Played a long time, and does a great job. They have very fast-twitch guys on the edge there. Those guys do a really good job of getting to the quarterback. Great speed off the edge.”

Clemson and Louisville kick off at 8 p.m., and Scott said he’s looking forward to seeing if the Tigers can get the offense – and the running game – rolling against the Cardinals.