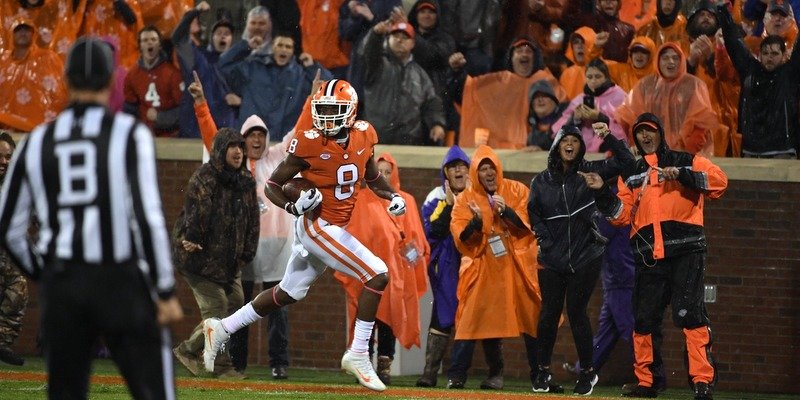 CLEMSON – The Tigers domination of Georgia Tech continued Saturday night as No. 7 Clemson defeated the Yellow Jackets 24-10 in a rain-sodden Death Valley.

The scoreboard might not indicate a dominant effort, but most of Georgia Tech’s yards and the only touchdown scored by the Yellow Jackets came with the game already in hand and against a bevy of backups.

It was Clemson’s third consecutive win over Georgia Tech and its fifth victory in six games.

OFFENSIVE PLAYER OF THE GAME: Kelly Bryant returned from injury and proved why he’s one of Clemson’s most valuable players. Bryant completed 22-of-33 passes for 203 yards and two touchdowns. He also added 67 rushing yards on 12 carries – a clip of 5.6 yards per carry.

As we noted in a story earlier this week, O’Daniel has had the most success of his career against Georgia Tech. He had 10 stops including a sack at Tech in 2014, then had eight tackles including three tackles for loss in a Clemson win over Georgia Tech in 2015, and finally eight stops and two tackles for loss against Paul Johnson’s team last year.

Cain is back: Through the first seven games of the season, Deon Cain never really made his presence known, but offensive coordinators Tony Elliott and Jeff Scott got the Florida native involved early. Clemson’s first offensive play of the game was a pass to Cain and the second was a 38-yard touchdown.

KB2 is back: Much was made during the off week and leading up to Saturday’s game about quarterback Kelly Bryant’s health after he sprained his ankle against Wake Forest and suffered a head injury in the loss to Syracuse. Bryant’s ankle was tested on Clemson’s second drive as he rushed for 18 yards on three carries.

Spence makes the kick: Head coach Dabo Swinney opened up the place kicker competition during the off week after Alex Spence was just 2-for-6 on the season. Swinney went as far as to bring in senior engineering student Drew Costa, but in the end, when Clemson was looking for a field goal early in the third quarter Swinney once against turned to Spence. Spence nailed the 29-yard field goal, causing his coaches and teammates to erupt in celebration.

Hunter Johnson gains experience: After not making an appearance at Syracuse two weeks ago, the coaches elected to give Johnson time in mop up duty late in the fourth quarter. While he didn't throw a pass, he was able to execute the read-option and hone in his skills in the running game. He also showed his athletic ability scrambling to make the best of a bad snap.

Clemson travels to N.C. State for a match with a Top-25 ranked Wolfpack team. State will be looking to exact revenge for the overtime loss last season, but the game has bigger implications. The winner of the game will be in the driver seat for the ACC Atlantic title, with Clemson’s only remaining ACC game against Florida State the following week.

Georgia Tech travels to Virginia to take on the Cavs in a 3 p.m. matchup. Virginia fell to 4-3 Saturday with a 31-14 loss to Pittsburgh.