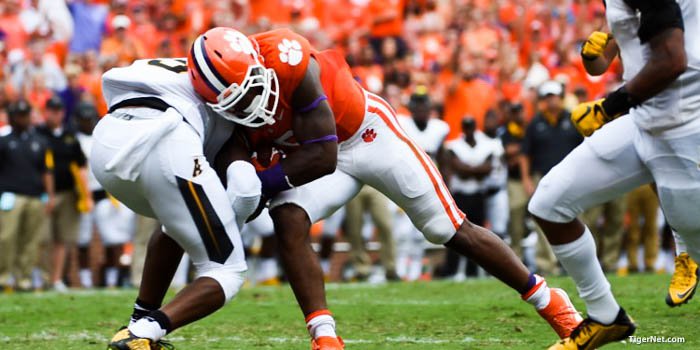 Wayne Gallman bowls over a defender.

CLEMSON – Saturday’s game was strange, but it was a win.

Clemson relied on its defense and the arm of Deshaun Watson

Deshaun Watson
So. Quarterback
#4 6-2, 207
Gainesville, GA
View Full Profile in claiming a 41-10 victory over outmanned Appalachian St. Saturday afternoon in Death Valley. The Tigers led just 3-0 at the end of the first quarter but scored 28 second quarter points to effectively put the game out of reach.

It was never easy, however.

Player of the game: The game was never really in doubt, but when things weren’t going well offensively the Clemson defense picked up the slack, thus the entire defense deserves to be the player of the game. Jayron Kearse

Ben Boulware
Jr. Outside Linebacker
#10 6-0, 241
Anderson, SC
View Full Profile had a pick of his own to set up another Tiger score. The defense forced four turnovers and amassed nine tackles for loss – three from defensive end Shaq Lawson

Stat of the game:Clemson scored 28 points in the second quarter, the most in any quarter since the 2013 home game against The Citadel.

What worked: The defense put together another dominant performance, not allowing the Mountaineers to score until late in the third quarter. The first Appalachian St. touchdown came against the second and third string players.

Deshaun Watson had the early interception but rebounded to make several long touchdown throws. Watson’s day ended early in the third quarter, but he finished the day 19-of-26 for 248 yards, three touchdowns and an interception.

Wayne Gallman
RS So. Running Back
#9 6-1, 210
Loganville, GA
View Full Profile ran the ball hard on Saturday, including his 23-yard touchdown run in the second quarter where he ran over the Appalachian State defensive back to get into the endzone.

What went wrong for the Tigers: The offensive line played really well last week against Wofford, but struggled at times against App. State. The Mountaineers had six tackles for loss, including three sacks. Clemson’s offensive line will have to do better job Thursday night in Louisville. In particular, the right side of the offensive appeared to struggle with pass protection and in run blocking.

Greg Huegel
Fr. Punter / Kicker
#92 5-11, 180
Blythewood, SC
View Full Profile made all of his extra point attempts but was shaky on field goals. Huegel missed his first opportunity – a 49-yarder – but the miss was negated by an offsides penalty on App. State. Huegel made his first official attempt of 39 yards, but later missed a 37 yarder in the fourth quarter. However, he did make a 47-yard field goal with a little over minute remaining in the game. Kickoffs were inconsistent, as was the kickoff coverage.

Penalties were a problem once again this weekend. Clemson had nine penalties for 75 yards, including an offensive and defensive pass interference, a couple of holding calls and a couple of delay of game penalties.

What’s next for Clemson?:The Tigers have a short time to prepare for Louisville. Clemson plays at Louisville next Thursday night in a nationally-televised 7:30 p.m. start on ESPN. Louisville was a 10-point favorite at home Saturday but lost a 34-31 heartbreaker to Houston.