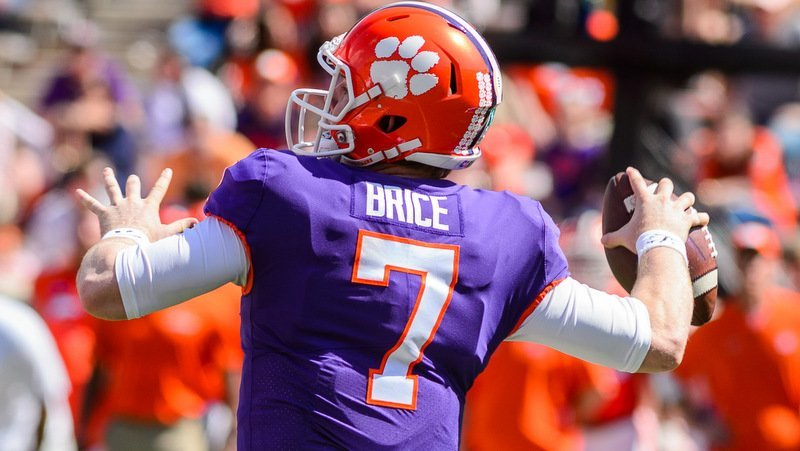 Brice will have the chance to start right away at Duke.

Chase Brice walked off the field in the Superdome and dealt with several emotions at once: the sadness of a loss and the bittersweet feeling that comes at the end of a long season. But he also felt at peace and knew it was time to move on.

Brice announced he plans to transfer to Duke, where he will be immediately eligible to play. Brice, who served as the backup to Trevor Lawrence the past two seasons, made his announcement official on Sunday. He plans to enroll at Duke in July, after he graduates from Clemson, and will have two years of eligibility remaining.

It was a decision almost a year in the making.

“What I wanted to do in the beginning is I loaded up in the summer because I wanted to give myself options at the end of the year if I were to decide to transfer,” Brice told TigerNet. “I probably made the decision midseason, just seeing how everything was unfolding but I didn't tell anybody, I know there were a lot of questions but that was more between my parents and me. After the final game, I really felt at peace. That's when I really knew. I felt at peace walking off the field knowing that I prepared for every game as well as I could, and I was ready. After the national championship game, I knew I was ready to move on to another team.”

Considering the length of Clemson’s season, other players entering the transfer portal had a jump on finding a new school and Brice knew he didn’t need to waste time.

“I texted Coach Swinney Tuesday night after we landed so we could meet Wednesday because you only have a short window of time to be contacted and choose because there's a dead period coming up in February and we were the last team to play,” Brice said. “A lot of people were already finished and were in the portal and taking visits. I tried to do it as soon as I could. It was just a really good conversation. We talked on the phone Wednesday afternoon, first, because he was sick and then we met on Friday.

“It was just more of a, 'I'm ready to go lead another team and have an opportunity and with graduating I can play right away. I've learned a lot here and it was the best three years I could ask for and I'm just ready to go let it fly.' He was supportive of that and he understood. He figured he was going to talk to me at the end of the season but he appreciated me waiting until the very end and not causing a distraction throughout the season.”

Duke was just one of the schools that Brice had in mind.

“I had a little list of maybe some possibilities just from the outside looking in depending on what Jake (Fromm) did at Georgia, they were up there with Duke and Wake Forest, Purdue. People that were graduating seniors and didn't have much experience in the backend,” Brice said. “I liked them coming out of high school a lot - Coach Cut (David Cutcliffe) and that coaching staff, they're just a great family. Once I ended the portal Coach (Jeff) Faris came and visited me right off the bat the next day. That just shows that they wanted me. That was kind of the difference between them and some other schools - just showing their interest.”

Brice has the chance to start right away. Duke lost quarterback Quentin Harris to graduation and only one quarterback on the Blue Devils’ roster has thrown a pass in a game. Over the last two seasons, Brice threw for 1,023 yards, nine touchdowns, and four interceptions.

“My goal is to work to be that starter and I feel like I have a great opportunity at Duke, especially being under the wing of Coach Cut and learning from him and his resume,” Brice said. “During my visit, I knew I wanted to go there, but I wanted to visit and get a feel for the team and the place where I'll be and just see the area and the facility and the field. After all of that, I just felt at home. Hanging out with the players, I didn't feel like a transfer or brand new. They were easy going. I think it will be a great transition.”

Brice is set to graduate from Clemson in May in Parks, Recreation and Tourism Management and will enroll in Duke’s Masters of Management Studies (MMS) program.

“What I did was I took Business in the beginning and got some of those classes out of the way and moved to PRTM for more of a sports management type of degree to go into coaching,” he said. “For this grad degree at Duke, it will be the MMS program. It's a great program. It's more of a business program.”

Brice will forever be loved by Clemson fans for helping Clemson rally to beat Syracuse in 2018 after Lawrence went down with an injury, going 7-of-13 for 83 yards and an interception. That win helped Clemson stay undefeated and eventually go on to win the national title.

He leaves Clemson with not only that memory, but many others that will forever mark him as a Clemson man and he had a special message for all the fans.

“My message would be that I'm thankful and blessed to have been a part of such a great place, program and to experience what I've experienced with the fanbase and the love and support,” Brice said. “You carry that with you forever. I'll never forget Syracuse and everything leading up to that. Then after the game and people so happy and coming back again and being some people's favorite player. You can't ask for more than that. It feels good. I'll definitely miss it.

“Clemson will always be a part of me and I know I can always come back and pick it right back up with whoever here and that's what I appreciate the most. The support. Rushing the field and singing the Alma Mater, that's so fun to interact with fans and to sign autographs and take pictures and make people's day or night. I just want to say, 'Thank you!'”

Clemson and Duke aren’t scheduled to play this season, but if both teams win their respective divisions the programs would meet in the ACC Championship Game.