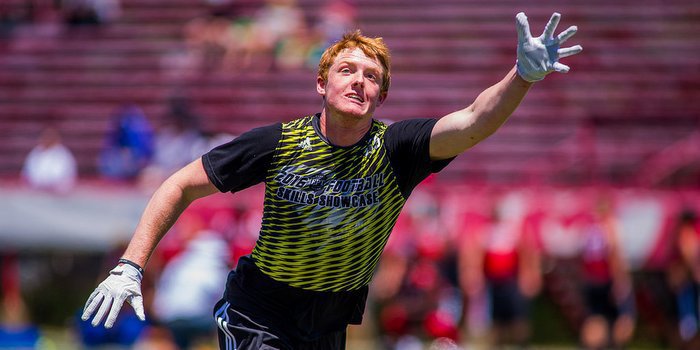 Venables wanted to surprise his dad on his birthday

It’s hard to find that perfect gift for the guy whose birthday sits just seven days before Christmas, but Clemson defensive coordinator Brent Venables received the total package this weekend when 4-star linebacker and son Jake Venables gave his verbal commitment to the Tigers.

Venables talked to TigerNet shortly after the announcement, and he said he felt it was just time to make a decision due to the small size of the 2018 class and because he knew it was the right call.

“I just knew. I was ready. I thought it was time,” Venables said early Sunday. “I also know this class is not going to be very big, about 12 people, and I wanted to make sure I had a spot. I am looking forward to getting all the guys we need. It’s fun, because I know the next nine we get are going to get be unreal, and the 2017 class is already off the charts. This is going to be fun.”

Once he knew he was ready to commit, Venables had to find the perfect time to announce.

Venables wanted to surprise his dad on his birthday "

“I've known for about a week, and I was thinking about my dad's birthday being this week, and I thought that this would be a perfect time,” he said. “I talked to Coach Swinney on Friday in his office and told him, and then I told him then I wanted to wait until Sunday to announce it. Coach Swinney and I walked down to my dad’s office - he didn't even know I was there - and I talked to him then.”

What were their reactions?

“Coach Swinney got up and gave me a big hug and my dad was trying to fight back the tears,” he said. “It's pretty special. Now I get to see the other side of it. My whole life I have been watching it and listening to how they coach and seeing how the guys react to them and how they play and now I get to be a part of that and that is pretty special.”

Venables ranks in the top ten prospects out of the state of South Carolina in most services. As a junior, Venables racked up 100 tackles, 10 sacks and led his team with 16 tackles for loss. As a sophomore, he had 89 tackles, eight tackles for loss and six sacks.

With his decision made, Venables can now concentrate on preparing for his senior season at Daniel and Clemson. He’s up to 6-2, 222 pounds after a rigorous workout routine which should set him up to pay on the outside for the Tigers.

“I will probably play the WILL or even the SAM, depending on how big I get over the next year,” Venables said. “I have been working out where Ben Boulware and Kendall Joseph train, at Flight School in Anderson, and I have been working on my speed, quickness, and strength almost every day.”