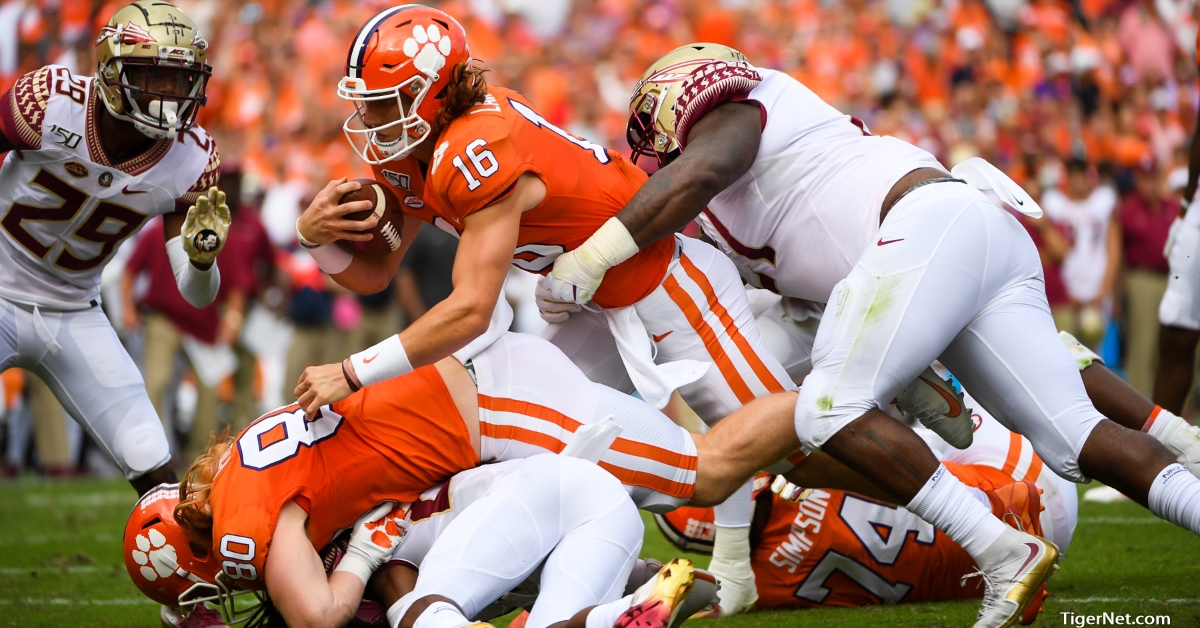 CLEMSON – The second-ranked Clemson Tigers looked like a team that has had two weeks to hear how they weren’t any good after a close win at North Carolina.

An angry Clemson football team was bad news for Florida State as the Tigers jumped out to a 28-0 lead at halftime.

STAT OF THE HALF: Clemson had four touchdowns in the first half, equaling the number of first downs that Florida State gained the entire half.

*Offensive balance: Clemson’s offense was clicking on all cylinders in the first half. They were essentially able to do whatever they wanted. The Tigers ran 52 plays for 367 yards. Through the air, Clemson had 193 yards and added 174 yards on the ground. Travis Etienne averaged 6.8 yards per carry in the first half.

*Getting defensive: Florida State had the ball eight times and only two drives went for more than three plays. The Seminoles’ first drive went six plays for 24 yards and the third drive when four plays for 19 yards. Clemson’s defense held Florida St. to 27 plays for 63 total yards, including just 16 yards rushing. Tanner Muse and Chad Smith had interceptions during the half.

*There wasn’t a lot that could be critiqued from Clemson’s first half, except for a Trevor Lawrence interception midway through the second quarter. On third down, Lawrence extended the play toward the sideline, saw a Florida State player out of bounds and tried to make a play down the field. The Seminole defender came back in bounds to pick off the pass and give the Seminoles the ball with their best starting field position of the afternoon.

*The Jumbo package needs some work. Facing a 4th-and-1 late in the second quarter, Tyler Davis, Nyles Pinckney and Xavier Thomas came into the game as this year’s version of the jumbo package. Thomas lined up at tailback but was stopped just short of the goal line.

*Field goal kicking is a little bit of an issue for Clemson right now. B.T. Potter missed a 24-yard attempt with 21 seconds remaining in the half. For the season, Potter is now 5-of-9.

TURNING POINT OF THE HALF: Clemson was the better team from the opening kickoff. The Tigers received the kick and marched down the field in six plays to take a 7-0 lead on a pass from Lawrence to Travis Etienne. Clemson never looked back.

WHAT CLEMSON NEEDS TO DO TO WIN: Stay focused and don’t take plays off. Clemson is the better team and the starters won’t finish the game but if the backups play with the same intensity and focus, Clemson will be just fine.