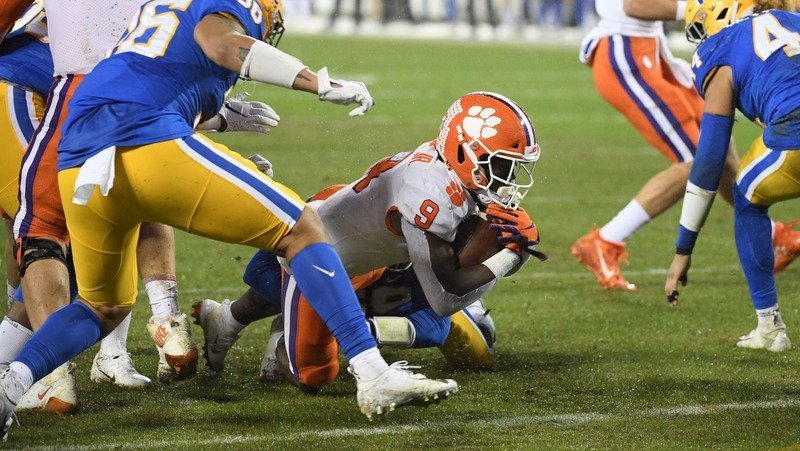 Travis Etienne scores his second touchdown of the night

CHARLOTTE, NC – A rainy night in Charlotte demanded a team be able to run the football with success. Enter Clemson running back Travis Etienne.

That wasn’t all the sophomore accomplished - Etienne tied Wayne Gallman (34 from 2014-16) for third on the school's leaderboard for career rushing touchdowns. Including his 156 yards against Pitt, Etienne has now recorded only the second 1,400-yard rushing season in school history (Wayne Gallman in 2015).

With 12 points in the contest, Etienne pushed his season point total to 132, breaking C.J. Spiller’s mark for the most by a non-kicker in school history (128 in 2009).

The first touchdown of the night is what got it all started.

“Going into the first play, kind of like a little outside zone we've been running all week. Knew it would be the first play of the game,” Etienne said. “Getting the handoff, seeing where the backer fit, it was just well blocked. There was just a big hole. I got around that to the outside. Amari (Rodgers) had this guy standing still. I mean, after that I was gone. Amare, great block downfield. Wouldn't have made it without him. I just thank him for that.”

Etienne gave credit to his offensive line for his performance.

“All that credit goes to my offensive line,” he said. “Coming in Monday through Friday, just grinding every single day, gives us the group of backs we have. You want to go out there and lay it on the line for them.”

In all, the Tigers rushed for 301 yards on the night.

“I think the reason I've been so successful this year is just the group of backs that I have, Tavien (Feaster) coming in there, running the defenses down, Adam (Choice) coming in,” Etienne said. “You see what he’s doing. When Lyn-J (Dixon) gets a chance, he's unbelievable in the vision he has. All my credit just goes to those guys.”

Clemson head coach Dabo Swinney said the Tigers wouldn’t be where they are without Etienne.

“For us to be able to run the ball 300 yards, a lot of credit to this guy next to me,” Swinney said. “What a year he's had. Special to watch Travis blossom into the player he is. But he took it over for us, that offensive line. We had no turnovers, rushed for 300 yards. We made just enough plays in the passing game.”