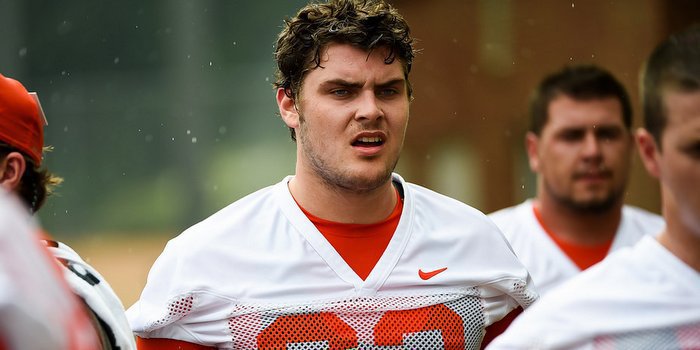 CLEMSON – Once you’ve faced a nine-foot shark in its own environment and lived to tell the tale, defensive linemen are a piece of cake.

Bookend tackles Jake Fruhmorgen and Mitch Hyatt were on a fishing trip in the Florida Keys over the summer, along with fellow lineman Noah Green and quarterback Tucker Israel when the group of Tigers met a real tiger. A tiger shark.

Hyatt started at left tackle last season while Fruhmorgen earned valuable snaps at right tackle. Both are expected to start this season, and they are roommates and best friends. The only thing that can come between them is….a shark.

The group went on a fishing trip over the summer, and an afternoon of snorkeling led to an unexpected encounter with a nine-foot tiger shark.

“When we are away, we try not to talk about football, but it always ends up being the conversation whenever we are doing something fun,” Fruhmorgen said after practice this week. “Me, Mitch and Noah, it's good to have those trips and build chemistry. One time, we were fishing in the Keys, and we saw a shark, and Mitch got scared and pushed me in front of it. It scared me, so I backed away from it. That was pretty funny, and it was a great experience.”

The shark encounter was quickly forgotten, however, with a return to campus and the start of fall camp. Fruhmorgen says there is a sense of urgency this season that he didn’t have last year while he was still learning how to play at the Division I level.

“It's definitely tenser. Last year was more of a learning role, but now you have to pick it up and go,” he said. “I just come out every day thinking I am going to be the starter. I have a good backup behind me in Sean (Pollard), and we are out there competing. He's a good player, so I have to keep at it every day.”

The departure of left tackle Isaiah Battle last summer thrust Hyatt into a starting role, and Fruhmorgen watched his best friend grind his way to a stellar freshman season. Instead of pouting, however, Fruhmorgen used his best friend’s experiences as a learning tool.

“I don't think it was tough. If anything, it was a good experience for me,” he said. “Just listening to Mitch and the experiences he had and talking to him about certain situations and stuff, I thought that was good. Picking his brain on certain situations and learning was good for me. Me and Mitch are best friends, and we are always talking about football and it's constantly in our minds. We are really excited to get the chance to play together this year. We are both different players, but we are just tall, lanky tackles.”

Fruhmorgen has flourished under the tutelage of offensive line coach Robbie Caldwell, but he also has another resource he turns to – his dad John played on the offensive line at Alabama and in the NFL with the Miami Dolphins.

“My dad is very involved, and I think he watches as much film as anyone,” Fruhmorgen said. “He gives me advice every day and helps me with things to work on. Today, the word was 'strike.' He told me I needed to strike better today. I am working on certain things, and he's a big help.”

He entered fall camp at 302 pounds, and now a complete player is ready to take on the challenge of being the starting right tackle for a National Championship contender.

“I've been working on getting more physical. Getting better pad level and more tough-minded,” he said. “Getting more physicality behind my pads. I added about 15 pounds, and I tried to eat the right food, giving up sweets and listening to the nutritionists and eating right. I feel good; I feel a little more balanced and more mature. I feel a lot better than last year, and knowing the plays helps.”