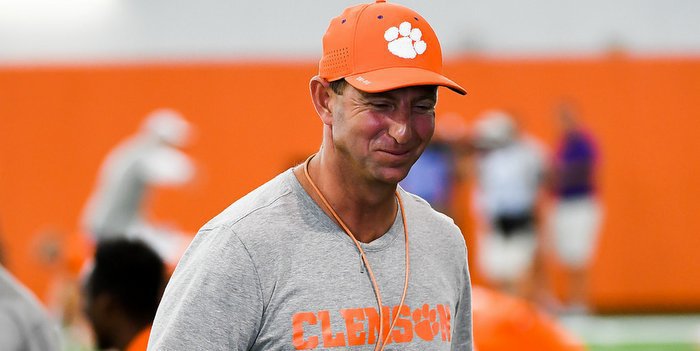 Swinney has fans in former Gamecocks Spurrier and Garcia

Tuesday was a good day for one former South Carolina coach and a former Gamecock quarterback to show their newfound love of Clemson and head coach Dabo Swinney.

Hall of Fame head coach Steve Spurrier started the fireworks earlier in the day by saying that he occasionally pulls for Clemson. Former quarterback Stephen Garcia took it a step further later in the day when he said if he had a chance to play college football again, he would love to play for Dabo Swinney.

Spurrier – who recently became the ambassador at Florida after leaving South Carolina – is currently on tour promoting his new book Head Ball Coach. My Life in Football, Doing It Differently–and Winning, discussed his relationship with Swinney on ESPN Tuesday morning.

“Dabo and I get along wonderfully well,” Spurrier said of Clemson’s head coach. “His wife and my wife - when we’re at some of these events like the Chick-fil-A golf event - we spend a lot of time with Dabo and Kathleen. I actually pull for Clemson occasionally, which most South Carolina people do not, because of Dabo. He does a super job there and I really like him.”

Garcia was a guest on WFNZ The Fan’s Primetime Show Tuesday and was asked about Spurrier’s comments, and he said that while he wouldn’t say he will pull for Clemson, he does like what Swinney and the Tigers are doing.

“It doesn’t really surprise me. Even when I was playing for him he’d (Spurrier) say, ‘I don’t understand it,” Garcia said. “All of these South Carolina people, they don’t care if we win any other games except for Clemson. I don’t really think it’s that big of a deal. I just care about beating Florida and Georgia and the SEC foes.’ It doesn’t surprise me. It is kind of interesting that a coach from such a heated rivalry says he pulls for Clemson some of the time. I don’t know if I agree with it or not. To be quite honest with you, I’m actually a Dabo Swinney fan as well. I really like him a lot. I have a few players that are from Tampa that play for him and they have nothing but positive things to say about him, so I’m a fan of him. With that being said, I prefer if they lost every single game.”

The former South Carolina signal caller even took it a step further, saying he would play for Dabo Swinney if he had another chance at a college football career.

“Aww, man, it really pains me to say it, but I really like the way Dabo Swinney carries himself and the way the program is going, but I just don’t see myself wearing orange ever,” Garcia said. “I wish he was somewhere else.”

The Tampa native then said he expects Clemson to make it back to the College Football Playoff because of the way Swinney manages his team and treats his players.

“I think they do (get back to the championship). As I said earlier, I hope they lose every single game but that’s just me being a rivalry guy. They have a special team. That’s why I think people respect Dabo Swinney so much,” Garcia said. “To see how passionately he recruits, how passionately he coaches his guys. He never says anything bad about his players and players respect that. They appreciate it when coaches kind of take the blame for a bad play or a bad game. His players definitely have his back and obviously they’re showing it on the field. They’re going to be hell to play against.

“I’m not going to bet against Alabama because they’re the Tom Brady of college football. Clemson, if they can protect Deshaun Watson and keep him healthy all year, I think they make it back. There’s just so many other teams that I don’t know much about. I don’t think there will be two SEC schools in there. I don’t know the other teams but I know those two teams are going to be in there.”

During his time at South Carolina, Garcia faced Cam Newton twice – once during the regular season and in the SEC Championship – losing both contests, and he said he sees a lot of Newton in Clemson quarterback Deshaun Watson.

“I think Deshaun is a better passer. Cam is obviously a freak of nature and can take over a game running the ball. That’s just my opinion,” he said. “I had the displeasure of playing against Cam Newton twice and losing both games. Although, we should’ve beaten them in Jordan-Hare, but that’s a different story for a different day. They’re obviously two of the best quarterbacks to come out of college football for the last couple of years, so there’s something to be said about that.”

The Gamecocks were 2-0 against Clemson during Garcia’s leadership and he said it’s recruiting and Swinney that have turned the tide in the Tigers’ favor.

“I think we just out-recruited them and out-played them when we played against them. That was Coach Spurrier’s pinnacle of his tenure,” he said. “We were winning 10 and 11 games for five years in a row. We just recruited better and we had better talent and now you see that the tables have turned. Coach Spurrier was teetering on the verge of retiring and it’s hard to recruit guys when you don’t know who your head coach is going to be. I think you saw a little bit of drop in talent in the recruiting realm. As of right now, Dabo Swinney has to be one of the best recruiters and one of the best coaches in all of college football and it’s showing in how well their team has been playing the last couple of years.”