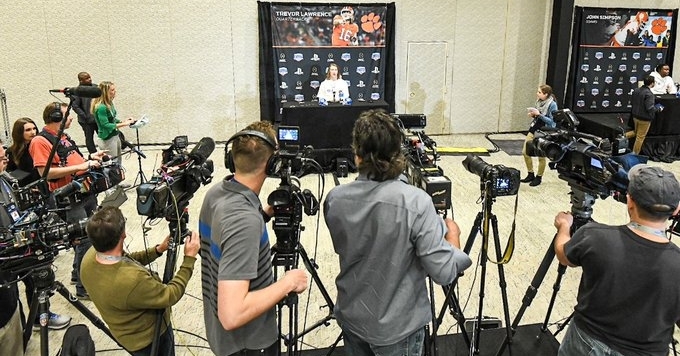 SCOTTSDALE, AZ – Clemson coordinators and three players each from the offense and defense met with the media Tuesday morning at The Camelback Resort to preview Saturday’s Fiesta Bowl between Ohio State and Clemson.

Here are a few quotes and notes from the availability with the offense with more to follow:

Trevor Lawrence on if the Tigers feel disrespected as a No. 3 seed

“Not really. It gives us a little fuel and something to work for. We're still -- if people think we're the third best team, so that's just how it's going to be until we prove it. Since we've got the opportunity, we're not upset. We're happy to be here and happy to have the opportunity to prove ourselves.”

“Just a great player. He's physical. He's fast. He's a big guy, really athletic. Everything you want in a defensive end. Just has a really good knack for finding the ball, getting to the quarterback. Always seems to be in the right place. That's just a testament to how he prepares, I'm assuming, and the kind of player he is.”

Lawrence on if the Playoff feels different this time around

Tony Elliott on his offensive line

“Our guys have done a great job. If you just look at the success these guys have had offensively, it is because they've been able to block out the distractions. I don't anticipate they'll get caught up in the moment. They're not going to make it personal. At the end of the day, we're successful as a program because there's no entitlement. It is not about one individual. It is about the team. Playing together as one. Everyone pulling the same direction. So I think the offensive line understands that that's our strength offensively, is those guys in the trenches, and their strength is the defensive line. It is a matchup between strength on strength and the guys that, like I said, that can block out the noise, not get caught up in the hype of the game, but focus on the game plan and the technique. That at the end of the day, the game plan doesn't matter if you don't have good fundamentals.”

Elliott on what to expect from the Ohio State defense

“They're about -- if I had to put my finger on it, they're probably about 55, 45, 60/40 between zone and man. But they do play a lot of man coverage, and they're good enough to do it. But then also they can mix it up. The great thing about it is they're able to disguise it. So you don't know until post-snap whether it is actually man coverage or whether it is zone coverage. That changes something, especially when you're going through your progressions for the quarterback. A little bit more zone. Like I said, it is about 50/50, but again, we won't know until we get out there. They may have something different planned for us.”

John Simpson on his time at Clemson coming to a close

“It means the world to me to play at Clemson. It was a great opportunity. I'm going to take advantage of it. I'm going to play my heart out every snap. Do what I've got to do, you know?”

Simpson on his future

“I haven't really thought too much about it. I'm trying to focus on the task at hand, and that's playing this game. Like I said, these are my brothers. I don't want to let them down. I don't focus on the future. I just try to focus on one day at a time. Like today, we have open Tuesday. Takeaways, no giveaways. (laughing). We're just going to play our game and practice and prepare and get ready.”

“Just their personnel. Their DB, their safety, backers. Just their front. They're fast. They're fast, big, long. So they present a huge challenge in just them having guys that they have and how athletic they are and how fast they are. You're definitely not going to be able to just -- execute at the end of the day. Not going to just go out there and just beat them. They present a huge challenge. You definitely are going to have something up your sleeve. A game plan, things like that. We definitely have to be ready.