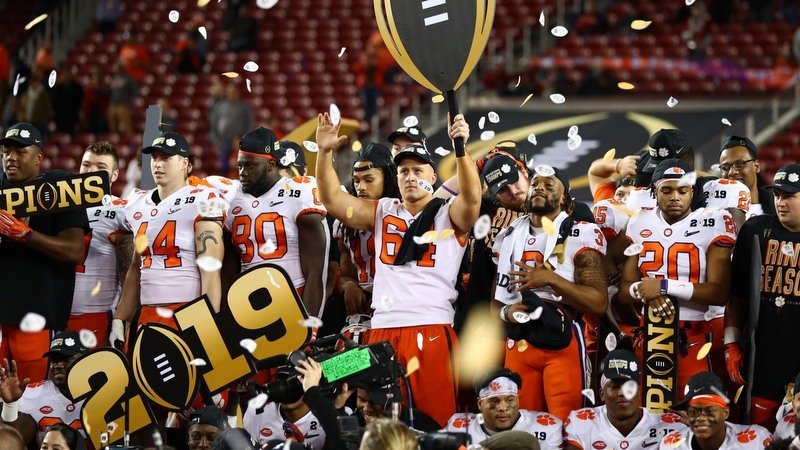 SANTA CLARA, CA – I pity the fool that has to face the eye of the Tiger.

The night before each game during football season, Clemson head coach Dabo Swinney picks a movie for the team to watch. The team is either in the team hotel in Anderson or on the road somewhere, and it’s a bonding moment for all.

Swinney picked Rocky III, the 1982 movie about a disastrous loss that later turns into sweet redemption. The nemesis of protagonist Rocky Balboa is one Clubber Lang, played by Mr. T.

Clemson was defeated 24-6 by Alabama in last year’s Sugar Bowl, and Swinney used to movie as a means of getting his team’s attention.

“For sure. What I am about to say is going to sound very corny, but we watched Rocky III last night,” offensive lineman Sean Pollard said. “It gave us a little extra motivation for some weird reason and we came out and attacked, just like Rocky did the second time he faced Clubber Lang. It was extra motivation for us. We came out an attacked, and Coach Swinney told us to go out and make all the plays and we did.”

Wide receiver Hunter Renfrow said the song Eye of the Tiger resonated with the team.

“All year, we talked about the ‘Eye of the Tiger,’ and that’s something Coach Swinney loves to talk about,” Renfrow said. “But I really sensed it. They didn’t have that look about them, and we did.

“And just like last year, we didn’t have that look about us. But just like in Rocky III when Clubber Lang went out and knocked out Rocky, he went back and got that eye of the tiger back, and came back the next time they fought and won. So, it was fun to kind of emulate that.”

Right guard Gage Cervenka said the team played the song before leaving the locker for the game and at halftime.

“Going out before the game and before halftime, we played Eye of the Tiger. That is what really got us pumped up,” Cervenka said. “Every Friday night we watch a movie and that is what we watched this week. It was fitting and had everybody pumped up. We had the eye of the Tiger.”

Pollard said the Tigers realized early on it would be their night.

“After the first series. The starters came over said that Alabama is human,” Pollard said. “We knew we had to battle. People were wanting to say it was over in the third quarter, but we know Alabama is a great team and they have great coaches and they don't stop fighting. We were telling people not to say that. Don't reap it before you sow it. Once we got in the 4th quarter and we were on that last drive and we knew we could celebrate.”

It was the night that Clemson’s Rocky Balboa turned Alabama into Clubber Lang. Clemson clobbered Alabama 44-16 to win the school's second title in the last three seasons.