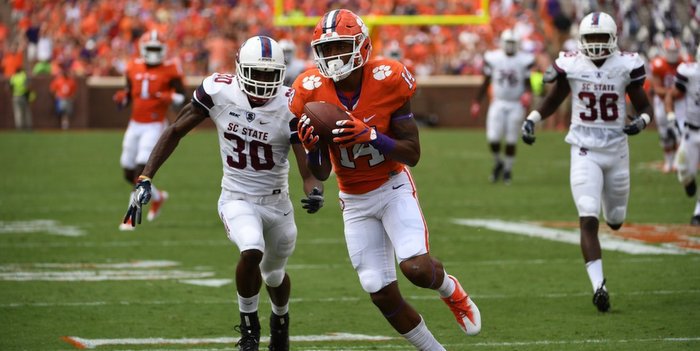 Denzel Johnson recovers the ball in the endzone for a touchdown

Clemson’s offense came out firing on all cylinders, the starters got enough work with a short week ahead and the backups got plenty of playing time as No. 5 Clemson rolled over in-state FCS foe South Carolina St. 59-0 in Death Valley.

Quarterback Deshaun Watson was 12-for-15 for 152 yards and three touchdowns in a quarter-plus cameo, while Wayne Gallman had seven early carries for 40 yards and a score as Clemson led 31-0 at the end of the first quarter and 45-0 at intermission.

The teams agreed to shorten the third and fourth quarters to 12 minutes apiece instead of the usual 15 minutes.

“Today was a great day. It’s hard to play 92 guys and still get the shutout, I don’t care who you’re playing," head coach Dabo Swinney said. "I’m so proud of our guys. They played a clean game for four quarters today. This was great for our team, for our spirit and our morale. It was great to get out there today and go play. I’m proud of how we started the game. I don’t think our receivers had any drops in the first half. Coming out and getting in rhythm was huge for us. It was great to see us getting that rhythm going. That’s how we play.

“There were a lot of good things involved in the game today. It was nice to get a lot of the backups in the game and we got to play a lot of linemen. Greg Huegel has done a great job for us this year. I know he’s mad he missed one today, but he’s had 10 touchbacks. It’s also nice to see our guys taking pride in the return game. Ray-Ray McCloud leads the country in returns and he’s such a weapon for us. He also had a great game on offense." 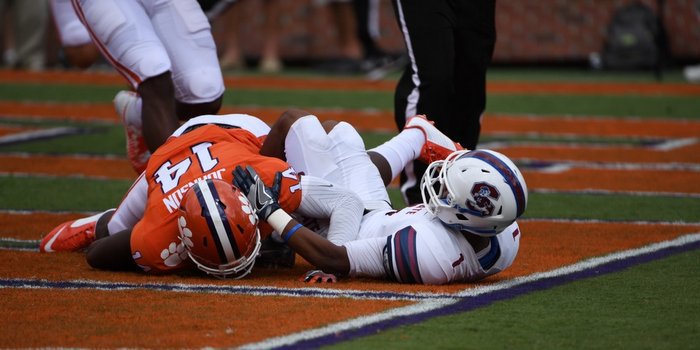 Denzel Johnson recovers the ball in the endzone for a touchdown "

Clemson returns to action in just five days - at Georgia Tech next Thursday for the season's first conference game.

“I’m glad that we’re 3-0. The ‘preseason’ is over now and we have eight straight conference games," Swinney said. "We have a quick turnaround this week and we have a lot of work to do to get ready for Georgia Tech. It was also fun to see our guys celebrate (associate head coach) Dan Brooks in the locker room after the game. Today was his 400th career game. To have that type of longevity as an assistant is incredible, and there’s no better man out there. I’m glad I was here to be a part of that.

“I really appreciate our fans today. There was a great turnout and a lot of energy from the start. We hope to see a great crowd in Atlanta, too.”

The Tigers made it look too easy on the game’s opening drive, marching 69 yards in 10 plays. Watson hit Ray-Ray McCloud on a quick slant that covered seven yards for the touchdown, and Clemson held a quick 7-0 lead just over three minutes into the contest.

Clemson forced a Bulldog punt, and once again ran through the State defense with ease, scoring on a three-yard run by Gallman for a 14-0 lead. On the ensuing kickoff, State returner Ahmaad Harris caught the kick in the endzone, and threw the ball at the official before taking a knee. Clemson’s Denzel Johnson jumped on the loose ball for a touchdown, and Clemson held a 21-0 lead with 5:20 to go in the first quarter.

Clemson scored two touchdowns at the 5:20 mark, marking the first time in school history two scores occurred at the same minute and second mark on the game clock.

Clemson forced another Bulldog punt, and Clemson’s second unit made its first appearance of the day. It took just four plays and Nick Schuessler hit a wide open Diondre Overton on a beautiful 45-yard pitch and catch for a 28-0 lead. It was the first reception of Overton’s career.

Three plays later, State quarterback Caleb York threw an interception that landed in the arms of safety Jadar Johnson. Johnson returned it 41 yards to the State two. Two plays lost eight yards, and Kelly Bryant’s third down pass to Mike Williams was incomplete and the Tigers settled for a 26-yard field goal from Huegel for a 31-0 lead with 1:39 remaining in the quarter.

Clemson’s 31 points made it the highest-scoring first quarter in Clemson history.

McCloud had a 31-yard punt return following State’s next possession, and three plays later McCloud caught a 36-yard touchdown pass from Watson and Clemson was up 38-0 with 13:41 still to play in the second quarter.

Another long punt return by McCloud set up a 17-yard pass from Watson to Cain, and Clemson led 45-0 with 9:56 to play in the second quarter. Clemson held a 319-55 advantage in total yards at the half.

Clemson scored on the opening series of the second half, taking 12 plays to cover 65 yards. The drive ended with Tavien Feaster’s first career touchdown, a 4-yard keeper that gave the Tigers a 52-0 lead. The ensuing possession was more of the same, and the drive ended when Kelly Bryant hit Trevion Thompson from seven yards out for a 59-0 lead.

Clemson travels to Bobby Dodd Stadium next Thursday to face Georgia Tech in a game that will be televised nationally by ESPN. Clemson has not won there since 2003.

scstate2.pdf
Get the latest Clemson gear right here!
Comment on this story