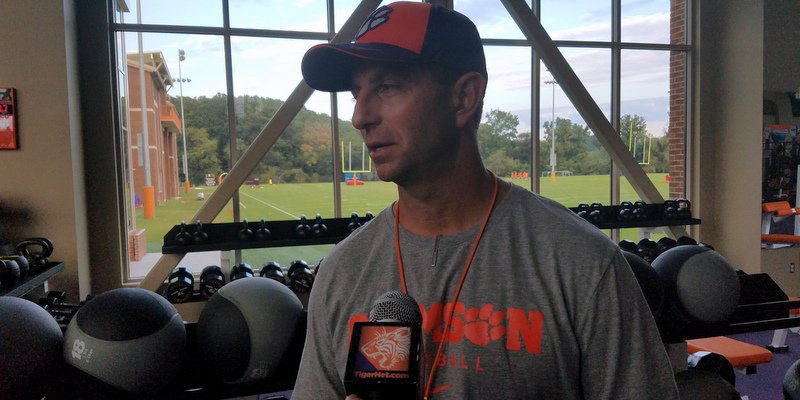 Clemson travels to take on Louisville this weekend

CLEMSON – Working Man Wednesday is in the books, and a loose and high-spirited Dabo Swinney covered a variety of topics during a post practice interview session with a small group of the media. Included in the tops were Elvis, Justin Bieber, his playlist before big games and how he loves to see Clemson fans show up for road games.

The Tigers practiced for two-and-a-half hours on the practice fields behind the new Reeves football complex Wednesday in preparation for this Saturday’s 8:12 p.m. kickoff at Louisville.

“It was good. It was normal Working Man Wednesday,” Swinney said of the practice. “Just trying to get our plan and the details down. We’ve got a big challenge, obviously. We’ve still got a lot of work to do. We don’t play until eight o’clock Saturday night so we’ve got a big day tomorrow, Friday and even during the day on Saturday trying to really get prepared for the challenge we’re going to see in all phases. The guys are focused and working hard. Van (Smith) is good and looks good. He’s ready to go. Marcus (Edmond) is still kind of day-to-day working through a little soreness but we’re in pretty good shape.”

Swinney said he is looking for a big Clemson crowd to meet them in Louisville.

“It never gets old. It really doesn’t. Everywhere we go, we always have a good crowd,” he said. “It’s great to win here, but it’s always something special when you can find a way to win on the road and be able to go over and celebrate with your crowd. You know people have traveled a good ways to come and support you. It’s always a lot fun. When we pull in, it just kind of makes you feel at home a little bit when you see that fan base.”

A reporter began to ask about the questions surrounding the offense, but Swinney cut him off and said he doesn’t care about the number of points score as long as Clemson wins.

“We just want to win. We’re not trying to win any points show,” Swinney said. “We’re not trying to win the stats wars. We just want to win the game. I’ll take 3-2, right now. 3-2, shake your hand, come on back the house and let y’all all talk about how bad the offense is and we’ll be 3-0. Moving on to the next one. Do you think anyone would talk bad about us if we win 3-2? We want to get better, but I really, really just want to find a way to win the game. It’s early in the season. I know we’re going to get better. We played one great game and the other game against a great defense - a top-five defense - and we left a little on the table.

“We made enough hay to win the game, but we left a little out there. We didn’t quite take advantage of all of the opportunities there and turned it over and we didn’t have the ball much early on, but we still found a way to win the game and more importantly finish the game with 3:15 and three timeouts on the other side and we take a knee. There were a lot of positives we can build on early in the season against a good team and good defense. We’ll get better, but I’m not going up there with anything to prove at all. I’m just trying win and do whatever it takes to win.”

The coaches won’t be on the road scouting recruits this Friday.

“We won’t have anybody out this week except for me and (Brent) Venables watching our boys and coming up later Friday night,” Swinney said. “We’re going to all be with the team. I think it’s important with the first road game that we’re all there and just kind of have that presence.”

Thursday night will be spent watching former Clemson quarterback Deshaun Watson make his first NFL start as the Houston Texans travel to Cincinnati to take on the Bengals.

“Absolutely. I talked to him two nights ago and it’s also his birthday,” Swinney said. "How cool is that? Tell me God doesn’t have a plan? The guy is getting is first NFL start on his birthday. I think that’s awesome. I have no doubt he’ll be well-prepared. He’ll play great. He’ll be ready.”

Swinney will walk into the stadium ready to listen to his favorite songs.

“You would love my playlist. You name it, I got it. Everything from Elvis to Baby Got Back - I’ve got it all. I’ve got old school, new school and everything in between,” he said.