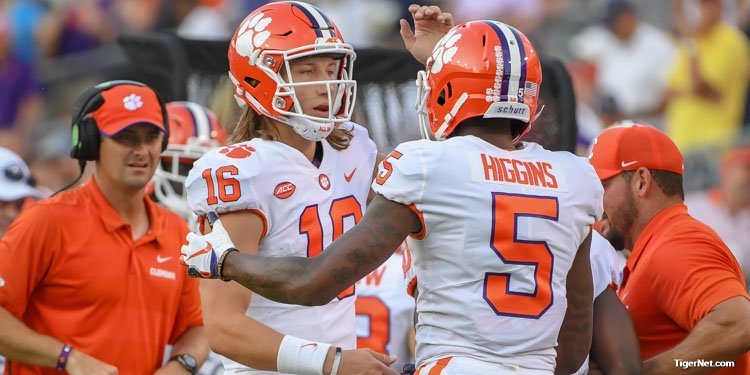 ATLANTA, GA – When it comes to the Clemson quarterback situation, the message from the Clemson coaching staff was consistent after four weeks of fall camp and the first three weeks of the season. That message changed Saturday night in the recesses of Bobby Dodd Stadium.

Until Saturday night, the coaches told anyone and everyone that would listen after fall camp that Kelly Bryant and Trevor Lawrence would share snaps during the season. That message didn’t change after each of the season’s first three games, even when Bryant led the Tigers to a win on the road at Texas A&M.

Following Clemson’s 49-21 victory over Georgia Tech in Atlanta, the coaches told the media that they wouldn’t comment on the situation, but would instead enjoy the victory before settling in to watch film and making a depth chart decision early next week.

That decision might not be a hard one to make.

Lawrence saw his first extended action as the No. 1 quarterback and went 13-of-18 for 176 yards, tossed four touchdowns and threw one interception. The majority of his action came in the second and third quarters when the Tigers scored on four of five possessions to take a 35-7 lead early in the third quarter.

“He certainly played great,” Swinney said of Lawrence. “I thought Kelly came back in and did a good job, too. We're going to enjoy it tonight. We're not going to set the depth chart here in the postgame press conference. We're going to celebrate a win, enjoy it and as coaches, we'll get back in the office tomorrow, evaluate and watch all the tape and go from there, just like we do every week.”

Swinney said Lawrence provided the Clemson with a spark.

“I thought he came in and did a nice job. He threw four touchdown passes and really gave us some great energy,” Swinney said. “He checked to the first touchdown and that was something we practiced all week. It was a certain call. We packaged and it and if we got a certain look, we were going to check it. He did a great job just like we game planned and just threw a laser to Renfrow. It was awesome to see. I thought he definitely played his best game without a doubt.”

“I think that is where we've been. We've told both of those guys that they will get two drives early and then we will kind of go with a hot hand and play from there,” Scott said. “I think with what Trevor showed us in his opportunities, we decided to stay with him because he had that hot hand. It's the same message we have to all of our offensive guys - it's not how many opportunities you get, it's what you do with them when you get them. I felt like Trevor did that today.”

Scott said the throw that Lawrence made to Hunter Renfrow for Clemson’s first touchdown was reminiscent of another Clemson quarterback.

“That was a big-time throw, but even the check was big-time,” Scott said. “He knew that if they ran a certain defense to that look, then it needs to be a check. To see a true freshman go out there and do that, that was very impressive. But that has become the expectation with him. To make the check and then make that tight of a throw is impressive. That was reminiscent of Deshaun (Watson) and Deshaun's first game at Georgia. Seeing a big-time pressure coming and making the check and then fitting the ball in where it had to be for the touchdown. That was a special moment.”

As for the depth chart, Scott echoed Swinney’s comments and said a decision will be made after the coaches grade the film.

“I think the way he played in his first two series he earned more opportunities today (in the game) and he made the most of those,” Scott said. “I think as coaches, this will be one of those videos that will be fun to go back and watch and grade and do all those things. We are going to enjoy this tonight and as coaches, we will go back and grade and any decisions that are made will be made after we grade the video.”