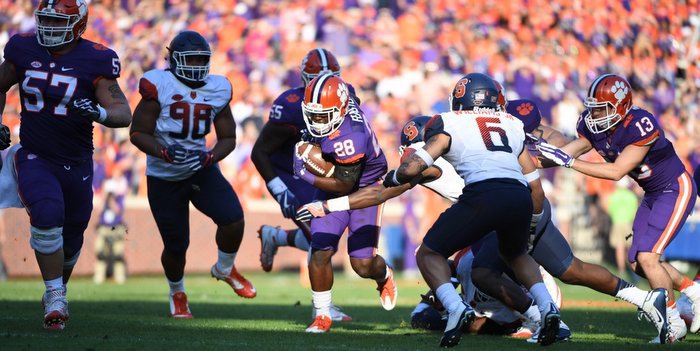 Clemson's rushing attack is getting better by the week

Plenty went right for Clemson in its 54-0 win over Syracuse on Saturday, offensively, defensively and with the special teams.

The Tigers rolled up 565 yards of total offense, while holding the Orange to just 277 – 172 passing and 105 rushing, and those totals helped boost Clemson once again in the NCAA’s weekly statistics.

In pitching its second shutout of the season, Clemson’s defense now ranks in the top 12 nationally in several defensive categories. The Tigers have allowed just 15.7 points per game (eighth nationally) while allowing 180.1 passing yards (11th) and 312.9 total yards (12th) per game.

And the Tigers continued to apply pressure, ranking sixth with 33 sacks and fourth with 80 tackles for loss, and that has turned into turnovers: Clemson is tied for third with 15 interceptions.