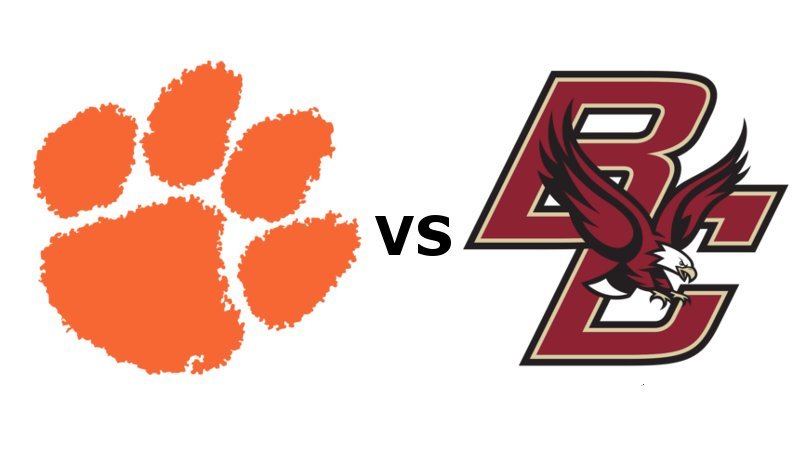 A chill in the air. A night game. An opponent willing to pull out all the stops to win, and an ACC Atlantic Division title on the line. It doesn’t get much better than what we will see Saturday night in Chestnut Hill.

No. 2 Clemson travels to The Heights to take on No. 17 Boston College Saturday night at 8 pm. If Clemson wins, they own the ACC Atlantic Division title for a fourth straight year. A Boston College win puts the Eagles in the driver’s seat for the crown.

The Eagles are pulling out all the stops. The parking lots are opening an unheard of four hours before game time, Kirk Herbstreit has made videos imploring fans to show up, the school has made a list of things to do at GameDay and head coach Steve Addazio is telling his team they want to be in a fistfight in the fourth quarter. A big-time game returns to The Heights.

Tailgating/Parking: Boston College officials recommend use of the Massachusetts Bay Transit Authority (MBTA, aka The T) as the most convenient way for visiting fans to access the stadium.

The Green Line B, C, and D trains all have stops within walking distance -- 4 to 15 minute walks, according to the school -- to Alumni Stadium. The Riverside Station (Exit 22 off Rt. 128/I95) provides ample parking and easy access from the Metro West Region via the Green line's D train. For more information, you can go online to mbta.com or call 617-222-3200.

*For just the third time in Boston College history, two teams ranked in the AP Top 20 will square off at home at Alumni Stadium.

*This is GameDay’s third trip to Boston College and the first time since 2009.

The Eagle defense is a unit that ranks 28th in S&P+ and is filled with playmakers at all three levels. Defensive ends Wyatt Ray (nine sacks) and Zach Allen (12.5 TFLs, projected first-round pick) and linebackers Connor Strachan and Isaiah McDuffie, the Eagles’ front seven is one of the best in the ACC. The secondary is led by preseason All-American safety Lukas Denis, and that defense will be needed against a Clemson offense that is clicking on all cylinders. The Eagles are tied for fourth nationally in interceptions with 14.

Clemson is red-hot on offense, but will have to find a way to run the football effectively in order for quarterback Trevor Lawrence to be effective. If the Eagles stack the line of scrimmage and force the Tigers to win through the air on a cold and windy night, the offense could find it tough to score points. The good news is that the Eagles are very average defensively against the run and Clemson should find enough room to open the passing game.

Running back AJ Dillon is the big man in the Eagle offense – they are 12-4 in the 16 games he has started. Dillon is a game time decision, and everybody thinks the key to the game will be stopping the run game. To me, the key to the Eagles keeping it close and even winning sits on the arm of quarterback Anthony Brown. Brown has been effective as a game manager this season but threw four interceptions in a loss at Purdue. When the Tigers have been tested – at Texas A&M and at home against Syracuse – teams have had success throwing the ball. The big weapon for the Eagles is tight end Tommy Sweeney, who has 24 receptions. The tight ends have 52 overall and there are times when the Eagles will deploy three tight ends at the same time. If they can dink and dunk down the field, they can find success.

However, Clemson enters the game ranked in the Top 5 in the country in both total defense (263.2 yards per game, third) and scoring defense (13.3 points per game, fourth). The Eagles won’t have a ton of success running the ball but will have some success in the passing game. Some.

The teams are relatively equal across the board – even in punting – but Colton Lichtenberg has settled in at field goal and made 5-of-6. The Tigers have the advantage at kickoff, but this is a push.

As we mentioned earlier, Addazio has his team believing they can win a street brawl. He’s said the game will be won in the trenches, and he’s right. Addazio wants his offensive line to go out and play physical and set the tempo – who likes to get hit on a cold night? The Eagles will have the crowd – already a sellout – in a frenzy early and Trevor Lawrence will have to battle through the early jitters in his first road night start. For any other team, the intangibles might be enough to cause big issues.

But these Tigers are used to winning on the road, at night, on GameDay. They are used to their game being someone else’s Super Bowl. This is old hat. The Eagles will have fun early, but things will settle and eventually it will be just football. Just football? That’s what Clemson does best.