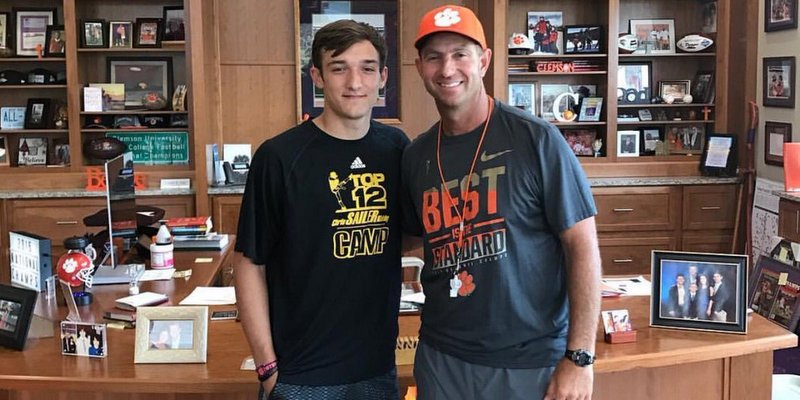 Potter poses with Dabo Swinney after his commitment

B.T. Potter walked into Death Valley last week, and the pressure was on. He knew he was kicking for a scholarship offer, and soon he will get the chance to kick in Death Valley with a game on the line.

Potter, a 2018 prospect out of Rock Hill (SC) South Pointe, arrived at Clemson head coach Dabo Swinney’s high school camp last week with the hopes that he could at the very least earn a grayshirt offer, and when he learned that he would be kicking in front of several of Clemson’s coaches, he knew a lot was on the line.

Another area kicker – Seneca’s Hunter Pearson – was in his group, providing motivation and a little competition.

“Whenever I got there, I was hoping to get an offer. But I was expecting a grayshirt,” Potter told TigerNet. Hunter Pearson was there, and kicking against other people makes me kick better.”

Watching the competition with Swinney were coaches Jeff Scott, Brent Venables and Danny Pearman, and Potter says he was nailing his kickoffs nine yards deep in the endzone. When the competition ended, Pearman stopped Potter to talk.

“After we kicked, Coach Pearman was like, ‘Hey, can we get you to meet with Coach Swinney in his office?’ Me and my family went over to his office, and Coach Swinney said he really likes my kickoffs because I kicked off really good that day. He said he also liked the fact that I could do all three (field goals, kickoffs, punting) and that I had a full offer. I made eye contact with my dad and we both smiled. I knew right then and there that Clemson was where I wanted to go and that I wanted to commit.”

The commitment would have to wait, however.

Potter poses with Dabo Swinney after his commitment "

“I didn’t commit right away,” he said. “My family and I went out to eat and we talked about it. While we were eating I texted Coach Swinney and Coach Scott and asked if it was ok for us to come back by, because I wanted to talk for a second. We met them over on the practice field, and I told Coach Swinney we met on it over lunch and I told him I was All In. He was really excited.”

Now, Potter gets to walk – and kick – in the footsteps of two of his idols.

“It’s awesome, because I’ve grown up a Clemson fan,” Potter said. “I would say I really look up to Bradley Pinion and Chandler Catanzaro. I look up to them a lot because they played at Clemson. They also work with kicking coach Dan Orner, and I’ve seen them there a lot.”