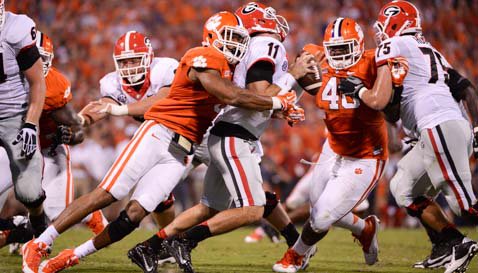 Clemson vs. Georgia. Just saying those words evokes memories of Herschel Walker, Vince Dooley, Danny Ford, and the heroics of David Treadwell. A national television audience saw Death Valley in all of its glory on a steamy night in 2013 when the Tigers and Dawgs renewed acquaintances, and now both schools are moving closer to putting a plan in place to play in the near future.

Clemson Athletic Director Dan Radakovich told TigerNet Wednesday that the schools are working towards an agreement that could be announced this summer.

“We are working with UGA to play them in the near future,” Radakovich said. “We are still working on details of the games but hope to have something more definitive later this summer.”

Georgia Athletic Director Greg McGarity told the Athens Banner-Herald that he also expects a decision during the next few months.

"I do think down the road you will see Clemson and Georgia playing each other," McGarity said. "I'm not sure about the frequency of it, but I do think you'll see us play each other in the not too distant future."

“Absolutely,” Swinney said. “I think it’d be great for both fan bases. I’ve said that for a long time. We’re going to play somebody like that every year. We go to Texas A&M this year, then they come to us. We played Auburn a bunch of times. So I think that would be great.”

The Tigers have been working to find a home opponent for the 2021 season, a process made more difficult because of the ACC’s contract with Notre Dame. Because of Notre Dame’s agreement to play five ACC opponents a year, the Tigers and Irish are scheduled to play each other in 2020, 2022 and 2023.

The 2022 game is at Notre Dame and Clemson is having a difficult time filling that final non-conference home game spot in 2021 with a Power 5 opponent because they cannot return the favor until 2024.

The 2024 season is open for both Clemson and Georgia – the Tigers host South Carolina that season and the two other home games are against Appalachian St. and The Citadel. Georgia has just one opponent on its 2024 non-conference schedule, a home game against arch-rival Georgia Tech.

The Bulldogs could host Clemson in 2024, but wouldn’t be able to come to Clemson until 2027.