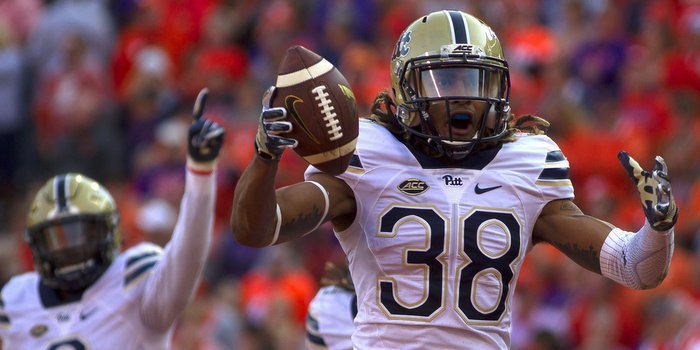 Williams and Watson set records, but it wasn't enough

CLEMSON – Welcome to the Pitts, Clemson.

Clemson needed a win for to clinch the ACC Atlantic and a 10th win on the season, but Pitt gained 464 yards of total offense and made plays when it counted to stop the Tigers. The loss ended Clemson’s 44-game win streak against unranked opponents and broke a streak of 26 straight wins in non- National Championship games. Clemson entered the game having won 15 consecutive games against ACC opponents. The Tigers had won 23 consecutive regular season games dating to a loss at Georgia Tech in 2014.

Watson set school and ACC records by completing 52-of-70 passes for 580 yards and three touchdowns as Clemson gained 630 total yards, but he also threw three interceptions, two in the endzone that thwarted Clemson scoring chances.

The Tigers did get big receiving games from Mike Williams and Artavis Scott – Williams caught 15 passes for 202 yards and Scott caught 13 for 125 yards, but Clemson’s inability to run the football cost them late. The Tigers ran the ball just 25 times for a paltry 50 yards.

Clemson can still clinch the Atlantic with a win at Wake Forest next Saturday, but this loss throws Clemson’s College Football Playoff chances into chaos. 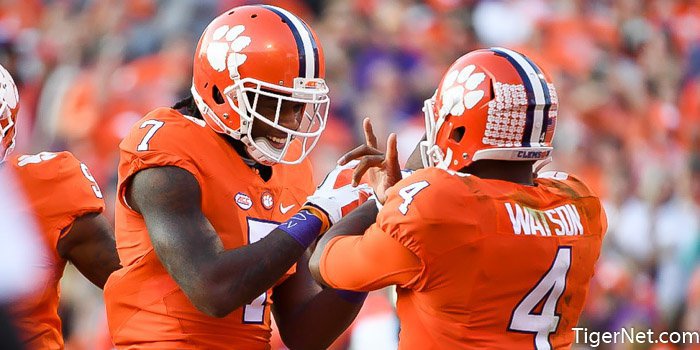 Williams and Watson set records, but it wasn't enough"

“Congratulations to Pittsburgh. I had no doubt that this was going to be a tough game," Swinney said. "Watching this tape all week long, this is a team with some close losses and I knew they would fight us hard, so a lot of credit goes to them for making the plays they needed to win.

“We had a chance to put the game away and they stopped us. We had been making those kinds of plays this year, so give them credit. They capitalized on some mistakes, but there were a lot of missed opportunities out there tonight. I love our guys and I hurt for them, but now we have to get back to work."

Swinney said the focus has to be on beating Wake next Saturday.

"You learn from this game, we grow and move on," he said. "It’s all about Wake Forest now and finding a way to win up there. We’re still in control of our destiny, and we’ll learn from this loss. We still have a chance to clinch our division, and we can’t let this game beat us twice.

“This team has the heart of a champion, and that will be revealed. I believe that adversity builds character and reveals it. I know what this team is made of, and we’ll fight back, respond and move on to the next one. For us, we’re going to use it to grow, build and get back on track with our season. There is a lot of ball left out there, and we’re going to get back out there next week with a great mindset.”

The Panthers took the opening kickoff and made it look easy in scoring the game’s first points. A 44-yard pass play on the third play of the game set up a 15-yard scoring strike from Nathan Peterman to George Aston for a 7-0 lead. The Tigers answered with a strong drive that ended up at the Pitt 13, but Watson threw an ill-advised interception in the endzone to thwart the threat.

Clemson forced a punt, and a 30-yard completion from Watson to Mike Williams set up Wayne Gallman’s one-yard touchdown plunge that tied the game at 7-7.

Pitt didn’t take long to answer, traveling 75 yards in five plays and scoring on a 46-yard pass from Peterman to James Connor for the 14-7 advantage. The reception is the longest against Clemson this season.

The Tigers put together a 12-play, 75-yard drive that ended with a Clemson score and controversy. Clemson marched to the Pitt one, but a third-down run by Gallman was stopped short of the goal line. The Tigers brought in the jumbo package – defensive linemen Christian Wilkins and Dexter Lawrence – and Gallman once tried to reach the goal line. The ball was knocked loose, and it appeared that Pitt recovered and scored on a 100-yard return. However, replays showed the ball broke the plane of the goal line before the fumble, and the teams were tied at 14-14.

The Clemson defense forced a Pitt punt, and the Tigers took over at their own 20 after the touchback. Twelve plays later, Watson hit Williams on a 15-yard fade in the end zone for Clemson’s first lead of the game. A third-down interference penalty helped keep the drive alive, and Clemson led 21-14 with 10:06 still to play in the second quarter.

Pitt took exactly 33 seconds to cover 65 yards for another score. On third down, Peterman hit Scott Orndoff down the right sideline. Orndoff was covered by Ben Boulware, whose back was turned. Boulware jumped too soon, fell, and Orndorff and walked into the end zone for a 55-yard score, which turned into the longest reception of the season against the Tigers. The extra point bounced off the right upright, and Clemson led 21-20 with 9:33 to play in the half.

The Tigers again marched down the field, but Watson threw his second interception of the day and Panthers did what they’d done all day – gashed the Clemson defense for chunk plays. On 4th-and-goal at the one, Peterman floated a pass to Aston for the score, and Pitt led 27-21 with 2:23 to play in the half.

It took the Tigers a little over a minute to answer. Watson hit Williams for gains of 17 and eight yards, Leggett for 19 and Scott for 10 before dropping a perfect throw over Scott’s shoulder in the endzone from 13 yards away for the 28-27 lead with just over a minute remaining.

Pitt crossed midfield and reached the Clemson 35. Peterman spiked the ball with five seconds left to give kicker Christopher Blewitt a chance at a 53-yard field goal. The field goal was blocked by Lawrence, however, and the Tigers took the one-point 28-27 lead into the endzone.

Clemson was forced to punt on the first possession of the second half, but Dorian O’Daniel stopped Pitt’s first drive. The Panthers got the ball to midfield, and when Peterman dropped back to pass on first down he was sacked by O’Daniel and the ball popped free. It was recovered by Lawrence, and Clemson took over at the Pitt 47.

Three plays later, Watson hit Cain on a pass down the left side for a 27-yard touchdown and a 35-27 lead early in the third quarter.

The Panthers got the points right back, but they did it amidst a chorus of boos. Twice on the drive, the Tigers stopped Pitt on third down and twice the officials bailed out the Panthers with questionable calls to extend the drive. A third penalty was a personal foul call on Boulware – on a simple tackle – that infuriated Swinney. The drive ended with a seven-yard shovel pass to Orndoff, and it was 35-34 with 4:35 to play in the third.

It took the Tigers eight plays and 81 yards to answer, with Gallman busting in from a yard out for his third touchdown of the game and Clemson led 42-34 late in the third as boos rained down on the officials from every corner of Death Valley.

The Tigers forced three consecutive three-and-outs on the Pitt offense but failed to capitalize after two of those punts. On the third they almost made them pay. Watson led the Tigers down the field –setting school records on almost every play – but was picked off in the end zone for this third turnover of the game. It was returned to the Clemson 30, with Williams chasing down the Pitt defender and saving a touchdown with a shoestring tackle.

The Tigers appeared to stop Pitt on third down – a pass floated out of bounds – but a late flag was thrown and Clemson was called for holding as boos once again rained down onto the field. Pitt scored a play later on a 20-yard run by Conner. The two-point conversion was blown up by Clelin Ferrell, however, and the Tigers held a 42-40 lead with 5:17 to play.

Clemson put together a nice drive with Watson setting more records with each pass, but Pitt stopped Gallman on third down. Swinney eschewed the punt or the pass and decided to go for it on 4th-and-1, but Gallman was again stopped short, and Pitt took over at its own 35.

Two quick plays put Pitt at the Clemson 34, but three plays forced a 4th-and-5 with 12 seconds to play, setting up a 48-yard attempt for the win by Blewitt.

Clemson vs Pitt Boxscore
Get the latest Clemson gear right here!
Comment on this story