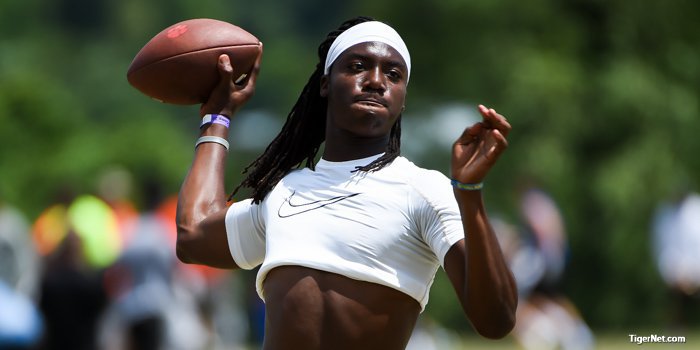 CLEMSON – I walked around Dabo Swinney’s high school camp Wednesday afternoon, and my first thought was that even baseball coach Monte Lee would enjoy seeing all of the talent that’s settled in the Upstate this week.

Lee has a saying when talking about a player who is better than anybody else on the field, and if Lee calls a particular player this, it’s the highest compliment he can give. “He’s a dude.”

When I asked about Seth Beer earlier this season, it was, “He’s a dude.” Same thing for Wake’s Will Craig and a plethora of other elite players.

Let’s start at quarterback. We’ve written a lot about Hunter Johnson, and with good reason. He’s a dude. But so is 2018 quarterback Emory Jones of Franklin (GA) Heard County. During the early part of drills, quarterbacks coach Brandon Streeter had the quarterbacks working in groups of two, and they would throw with each other. Jones and Johnson worked together – probably so Streeter could keep an eye on both.

Jones, who is listed at 6-4 and 180 pounds but looks thicker now, made every throw Johnson made and looked impressive doing it. Jones visited Ohio St. a few days back – he says the Buckeyes are his dream team – and came away saying Urban Meyer’s group had the lead. However, Clemson and Tennessee are right there and this camp session can’t hurt, especially working with Johnson and Streeter and throwing to some of the Frisbee-catching dogs that have been at camp this week.

*I know there are players higher on Clemson’s secondary board than Santee (SC) Lake Marion’s Tank Robinson, but he’s a baller. Takes coaching, intense, nice back pedal and I like his size.

Another one of those defensive backs I really liked was Cornelius (NC) Hough’s Tyus Fields. He has Clemson, NC State and Tennessee offers. He’s a 2019 kid, but I’ve been told Clemson is high on his list.

*Gentry Bonds is another standout from today, and Nikki talked briefly about him after the morning session. He’s currently a 3-star, but I say no way. He should be higher. 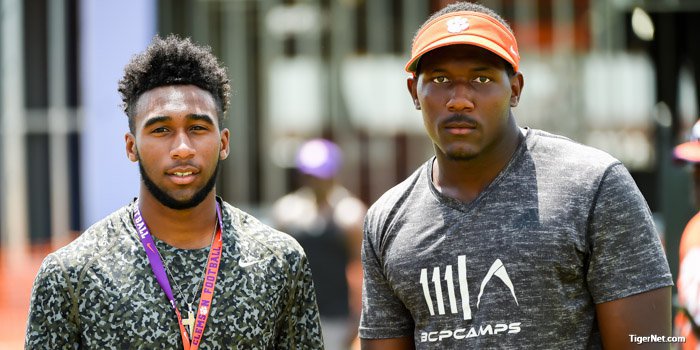 *Big-time defensive end target Zachary Carter has only worked out once, but he’s been at every session.

*Tee and Amari. There are days that it doesn’t stink to have this job. Despite the heat and humidity, today was one of those days simply because we got to see Amari Rodgers and Tee Higgins working together. I’ve said it before – Rodgers is a great get, and he reminds me of a thicker Artavis Scott.

But how can you tell the difference between the elite players and the ones struggling to get attention? Rodgers and Higgins would have quiet little dance-offs while waiting their turn, and then never miss a beat when it came time to perform. And perform they did.

Seeing Higgins immediately brought back memories. I walked into camp all the way back in 2010, and I had it on my mind to see the nation’s top-ranked wide receiver recruit in Dorman’s Charone Peake. I walked onto the field, and one of the coaches beckoned me over and asked who I was there to see. I told him, and he grinned and said, “Check out this kid from Fort Myers named Sammy Watkins. He’s the real deal.”

Watkins was a dude. And so is Higgins. Best I’ve seen from a total package standpoint since Sammy came through.

Working out with the receivers were three more I really liked. 2019’s Jashawn Sheffield of Saint Simons Island (GA) Frederica Academy jumped out at me as he worked with the A group. He’s young, but the skills are there. 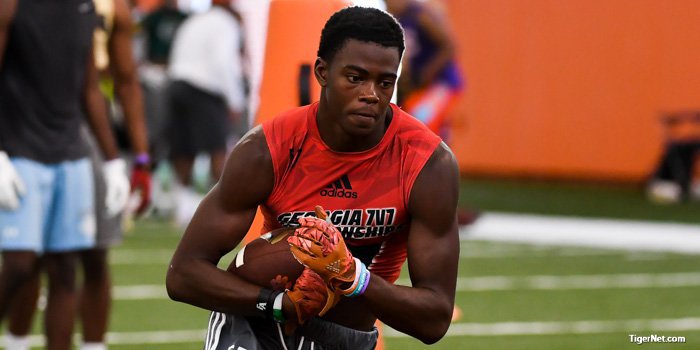 Another one to watch is Dorman’s 2019 receiver Jacoby Pinckney. He’s in a tough group to get a Clemson offer, but he’s steady, great work ethic. South Carolina has already offered. And finally, loved what I saw out of Greensboro (NC) 2018 receiver Tre Turner. He doesn’t have a Clemson offer, but everybody else has offered. First thoughts were that he reminded me of Diondre Overton at the same age, especially with his 6-4 frame.

*I love watching the defensive ends. Athleticism plus size plus Marion Hobby makes it an interesting group to watch. Two of the state’s best for 2018 were on display today in Florence (SC) Wilson 4-star Xavier Thomas and Anderson (SC) T.L. Hanna’s Stephon Wynn.

Both players are fun to watch, and as is typical for an end still two years away from graduating you can see a few rough edges. These two don’t have a lot of those rough edges, and they bring different body types to the table. Wynn, a Clemson legacy, isn’t afraid to work hard. 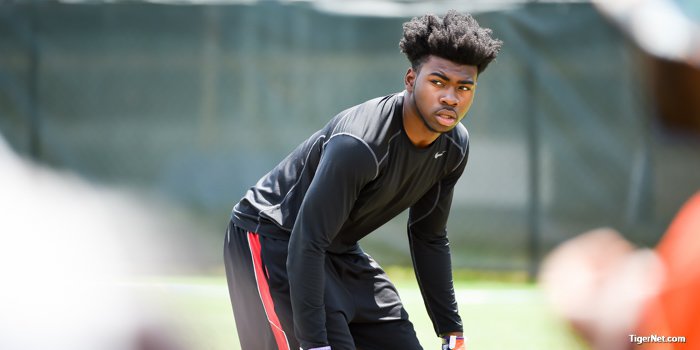 *It’s always great to be around the current players and see them having fun with the campers. I walked by and asked Jordan Leggett and asked him if he had performed well enough to get an offer, and he said no, then grinned and said he was gonna work out with the quarterbacks.

*I went over to watch former player Thomas Austin coach the offensive line, and there’s no doubt he’s great. But center Jay Guillermo spent extra time with a young camper who couldn’t quite get his “set” right, and I don’t think I’ve ever seen anyone be so patient. His grandfather is one of North Carolina’s legendary coaches (Ron Green), and it’s easy to see it comes naturally. When football is done with Jay as a player he has a way to make a living. And considering where he was a year ago, it was awesome to see.