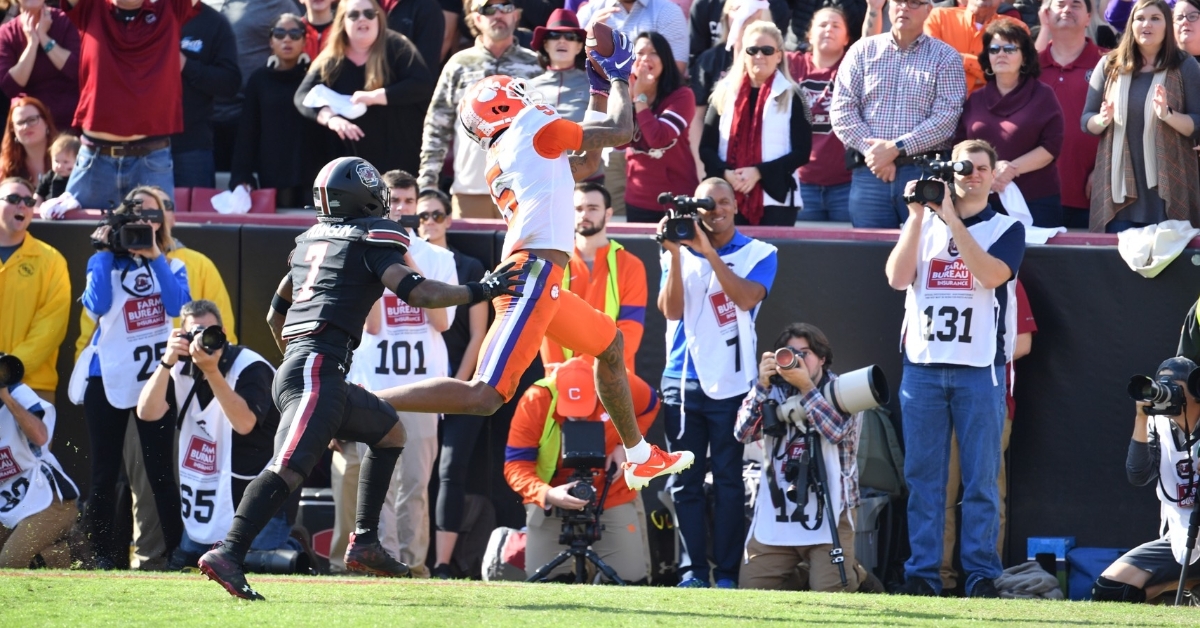 Tee Higgins grabs the first score of the game

COLUMBIA, SC – It was business as usual as the Tigers took command of the rivalry game with South Carolina early Saturday afternoon.

Clemson jumped out to a 24-3 lead on South Carolina in the first half at Williams-Brice Stadium.

The Tigers had 314 yards of total offense – 232 yards passing and 82 yards rushing. South Carolina managed 99 yards of offense – 64 yards through the air and 35 yards on the ground.

PLAYER OF THE HALF: Tee Higgins was simply phenomenal in the first half catching everything that was thrown his way. Higgins had three catches for 101 yards and two touchdowns.

STAT OF THE HALF: Clemson had almost as many tackles for loss (four) as South Carolina had first downs (five).

*The L-H Connection – Trevor Lawrence and Tee Higgins connected early and often in the first half, including for a 65-yard touchdown that was a thing of beauty.

*Pick City – Derion Kendrick picked off Ryan Hilinski on the Gamecocks first drive of the game. Clemson has had at least one takeaway in eight consecutive games and 16 times in the last 17 games.

*Fourth Down – On Clemson’s first possession, the Tigers drove down the field only to be stopped four consecutive times on the goal line. After a timeout, Clemson brought in its jumbo package but Travis Etienne was stopped just shy of the endzone on fourth down.

*Trick plays – South Carolina offensive coordinator Bryan McClendon decided to throw the proverbial sink at Clemson’s defense and on a few occasions caught the Tigers looking in the backfield. The Gamecocks used two different quarterbacks and lined running back Rico Dowdle up at quarterback to manufacture its first scoring drive of the day that ended with a field goal.

TURNING POINT OF THE HALF: Clemson took the opening kickoff and drove down the field in 14 plays, but Etienne’s 4th-and-goal rush was stopped at the one. South Carolina took over on downs and gained a quick first down. Three plays later Derion Kendrick stepped in front of a Ryan Hilinski pass at the 37 and returned his interception 14 yards to the Gamecock 23.

WHAT CLEMSON NEEDS TO DO TO WIN: Clemson just needs to continue what it’s doing on offense. The Tigers have had a lot of success in the passing game against South Carolina’s secondary and have depended heavily on the wide receivers while they feel out the running game.

South Carolina will continue to mix tempo and looks on offense, so Clemson’s defense needs to continue to play its assignments to keep Hilinski and the Gamecock offense at bay.