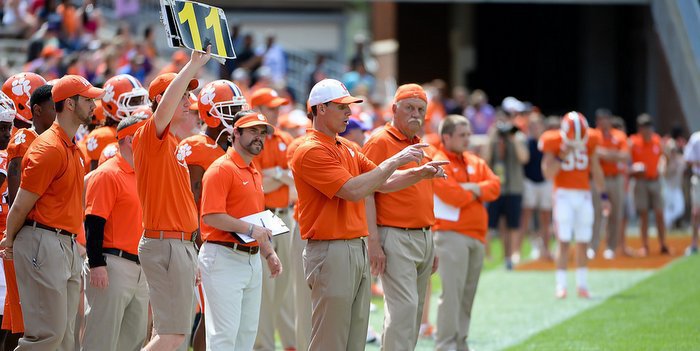 CLEMSON – Brent Venables didn’t have to watch the film of Clemson’s loss to Pitt. He knew the issues because he watched it unfold in person.

Pitt’s offense rang up 464 yards of total offense, but it was the shovel pass to the tight ends that cost the Tigers dearly. Starter Scott Orndoff entered last Saturday’s contest against the Tigers with a season-high five catches, and that was in the opener against Villanova.

Against Clemson, Ordoff caught nine passes for 128 yards and two touchdowns, equaling his season output for scores. Backup tight end Jaymar Parrish entered the game with three catches for 34 yards but reeled off a 44-yard catch against the Clemson defense. Fullback George Aston had scored two touchdowns all season but caught four passes for 29 yards and two more scores.

Not a great day for Clemson’s safeties and linebackers in coverage and Venables didn’t have to see the tape to realize that.

The Tigers face off against Wake Forest this weekend with an Atlantic Division title on the line, and the Demon Deacons feature tight end Cam Serigne, who has 20 receptions for 268 yards on the season. Venables expect Serigne to be featured heavily in the game plan along with the shovel pass.

“Well, hopefully, they won't throw it to them,” Venables said. “They use him the same way with throwbacks, verticals, boots. I'm sure they will put the shovel in. I would."

He then added that it all came down to discipline, and Clemson didn’t have it against the Panthers.

“We have to play with discipline. We sat here a week ago and said the same thing was going into that game that it is a lot like the option,” Venables said. “Low and behold they ran the inverted shovel option. We didn't stop the dive from the first drive. We had two plays on the first drive after we jumped a flat route on three deep coverage and they hit their man for 44 yards that got them all charged up on the second play of the game. Nobody's tackling the dive. The dive player did not tackle the dive twice on that first drive, and as a result, it gave that play life the rest of the game. It happened 12 or 13 times for 75 yards. That was their run game, and it kept us off balance. When you aren't stopping the dive, you are just going to be trying to hang on. I thought that extended drives and gave them life and created some critical plays during the game that resulted in touchdowns."

Venables said the threat of the Panthers’ horizontal game didn’t have anything to do with the failure to stop the inside pass.

“No, not at all. When that tackle blocks down, that guy sits. That's it,” he said. “So the horizontal stuff, that guy wasn't making those plays. We got guys for that. So that didn't have anything to do with it, just read your key with discipline. He blocks down, you squeeze, you sit, and that's as simple as it gets. We just didn't do it. Other times, it's not just one guy. Another guy would have his hand in it about four times and then some other times they caught us in a bad call that we had not worked. They did a good job of giving it all kinds of different ways with different personnel groups, different motions, shifts and we were in some different calls. It's really just fundamental stuff too."

On four of Pitt’s drives, however, the Tigers appeared to stop the Panthers on third down but questionable penalties were called that extended each drive. All four led to touchdowns, and while Venables said there were “way too many” costly penalties, he admitted the officials might hold linebacker Ben Boulware to a different standard.

“They might. That would be a good question to ask them (the officials)," he said. "I don't know. Ben has played really well this year, and I love his emotion. I think Ben has been fine. He has done a good job with channeling it and guys feed off of him. He knows how to control himself as well. He is a passionate player, and you don't want to handcuff him. He knows when to say when and he has done a good job of that this year."

The loss of Scott Pagano

"Well, it hurts. Scott is a great leader for us, a tough guy, and has played really well. We do have a little bit of depth there. Albert Huggins will have to step up along with Jabril Robinson.

The growth of Dexter Lawrence

"Not that he ever lacked any confidence, but his confidence has been different. He has played pretty consistently for a young guy. He gets off blocks and makes plays, and you could say he has gotten more and more confident as the season has gone along."