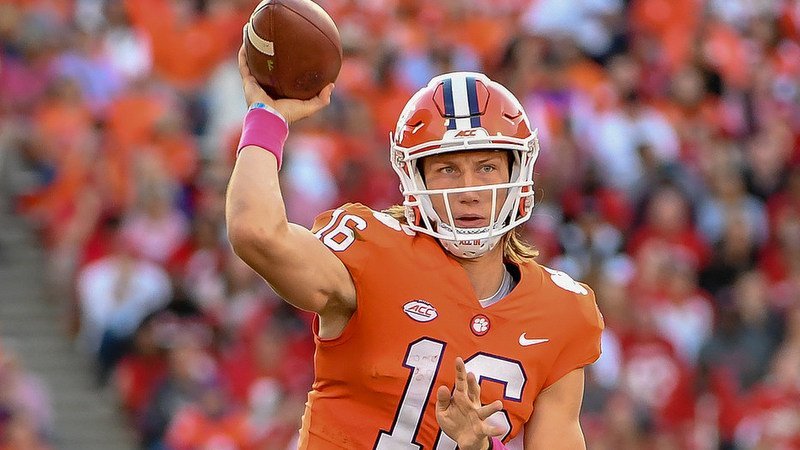 CLEMSON – The impact that quarterback Trevor Lawrence has on the Clemson offense is noticeable. The Tigers are averaging almost 550 yards of total offense per game since Lawrence took over as the starter, and have scored 104 points over the last two games.

The scary part is that Lawrence is just now beginning to feel comfortable.

“Not that he was a guy that was super jittery through his first two starts, but he was much more comfortable starting the NC State game all the way through,” co-offensive coordinator Jeff Scott said this week. “Syracuse we got off to a slow start and we had a fumble and Wake Forest we didn’t get the exact start we wanted. I felt like he was the most comfortable this past game, his demeanor and the way he controlled the snap count.”

Scott agreed and said Lawrence made good decisions against the Pack.

"I felt like Trevor had full control over what he wanted to do. We had a ton of run pass tags that Trevor had to make a decision on. I think he was in the 90th percentile of the decision-making aspect,” Scott said. “It was just a thing of beauty watching him make those throws. He was making NFL throws from sideline to sideline, that makes us better offensively. Defenses know now that they have to cover the entire field. That is going to pay dividends for us down the road.”

Scott said Lawrence is part of the reason the offensive line is protecting better.

“Part of it is Trevor, Trevor did a really good job flipping protections,” Scott said. “We were concerned with NC State's exotic pressures that they bring on third down. They got us one time where Trevor didn’t flip it the right way, but the rest of the time he called the right flip. The offensive guys are just really on the same page.

"The days of just four guys rushing up the field, we welcome that now. There is a lot of twisting and movement in games; offensive linemen are doing a three-way bump now where they have to pass off defenders. To do that everyone has to be on the same page pre-snap. Then everyone has to be able to actually execute it. Communication up front is key and Trevor taking charge and being loud while getting everybody on the same page is a big part of it. For the most part, our O-line has done a great job. Trevor has gotten hit a couple of times, but when you throw it as much as we did you will probably take some hits.”

Changing the protections is something the coaches allowed Deshaun Watson to do during his freshman season.

“As coaches how much you ask your quarterback to do is really how much they can carry. Deshaun was that way; we allowed him to change the protections his freshman year,” Scott said. “Trevor does a great job of that; he is very smart. Coach Streeter does a great job in the film room with Trevor and Chase. They are having high-level talks over there. Trevor is very special in many ways, but watching him grow mentally has been really impressive.”