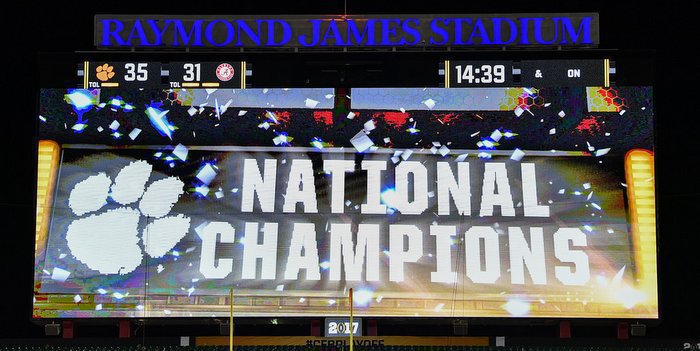 Clemson fans enter the offseason knowing they are champions

The confetti has been swept away, the parade is finished, and Death Valley now sits and waits for the spring game on April 8th. The coaches are out on the road recruiting this week, spread out across several states, and the players that were an integral part of Clemson’s National Championship win are scattered to the four winds.

The players who made the plays on Clemson’s final drive against Alabama have left Clemson’s campus, traveling as far away as California to begin working on the next step in their journey, while the underclassmen they left behind on campus get back into the routine of college life and rest their bodies for the next stop in the process.

The National Championship Trophy sits somewhere in the WestZone, waiting a few weeks for the move across the street and into its new home in the new football operations center.

It if all sounds like it has a finality to it, it does. That team, that special, special team that scared us and maddened us and thrilled us, is no more. Ben Boulware making plays in Clemson uniform? Deshaun Watson’s poise under stress? Wayne Gallman’s understated brilliance? The athleticism of Mike Williams? The grace of Artavis Scott? The gritty attitude of Jay Guillermo? The confidence of Jadar Johnson, or the determined look of Cordrea Tankersley?

They all live now in our memories, the plays forever available on some form of digital media.

The finality of it all means we finally put the 2016 season to bed. A friend sent me a message Sunday asking if the end of football season causes some sort of depression. We sit for months throughout the spring and summer, anxiously counting down the days until the ACC Football Kickoff, the start of fall practice and the kickoff for the opener.

Once the countdown gets inside 100 days, we begin to feel that little flutter inside that tells us college football once more beckons. And then, in the blink of an eye, it’s the midway point of the season. Then there are just a few games left, and then the season ends.

Those that follow Clemson have been fortunate the last few seasons. The season hasn’t ended with some desultory bowl game a few days before Christmas, and it hasn’t ended in some boring locale like Birmingham a few days after.

The Tigers have managed to attend BCS games and the College Football Playoff Games. Last year, the season extended into mid-January, and this year we’ve reached the start of the year’s first month with the flush of 2016 season’s success still felt on our fevered brows.

It’s been 134 exhilarating days since the opener at Auburn. It’s been 166 days since the start of fall practice in early August. Not quite half a year, but enough time has passed to quench some of the passion fans feel for college football, the sport many of us consider to be the best on the planet.

The bad news? There are 228 days until Clemson opens the season against Kent St. in Death Valley. Sure, we have spring practice and National Signing Day and head coach Dabo Swinney’s camps in June, but those are small consolation for a fan base that loves to see its team play on those gorgeous fall Saturdays.

The next time we meet with the coaches and players, spring practice 2017 will be on us, and there will be storylines aplenty, and those storylines will keep us company throughout the long wait. Who will be the starting quarterback? Who will play running back? Who takes Mike Williams’ spot? Who are the new voices in the locker room that will provide leadership?

But I’ve said all that to say this – this offseason won’t be as bad as previous offseasons. In fact, it will be sweeter than any down time in 35 years. Why? Because when the winter winds blow, when the spring pollen causes swollen eyes and sneezing and when the heat of a searing summer makes you long for a fall day in the friendly confines of Death Valley, Clemson fans will have a soothing thought to fall back on.

When the days until the season opener still sit in triple digits, you can think about Hunter Renfrow and his 13 steps to glory. When you watch the mailbox – waiting for season tickets to arrive with a sense of frustration – you can look back at the confetti that fell from the Tampa sky. When another family outing runs a little too long, and your mother-in-law refuses to leave, you can look back on the final kneel-down that ran out the clock on Alabama.

Yes, it’s the offseason. But this one will be the best in a long time because every Clemson fan knows it begins with the Tigers as the best in the land, and that’s a comforting feeling heading into the next several months.

And there is one final question I will throw out there – can we do it again?