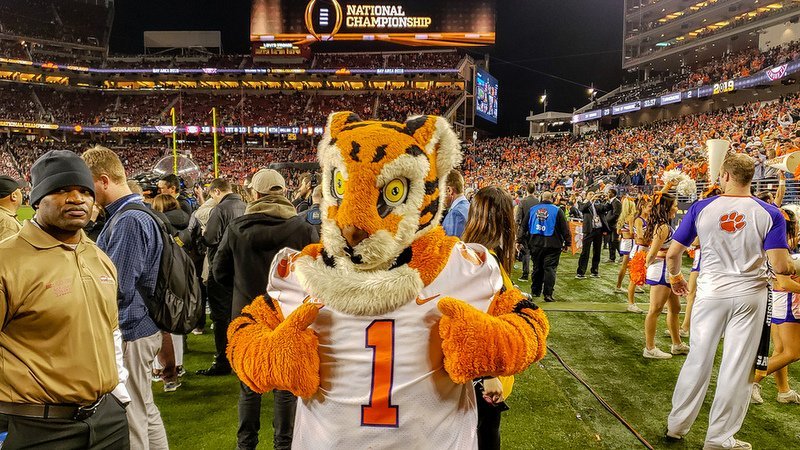 This postcard will probably make the trip to future games

It’s been two weeks since Clemson defeated Alabama 44-16 in the title game out in Santa Clara, and a busy few weeks it’s been with parades and press conferences and getting back into the basketball swing of things.

I’ve been battling the end-of-season crud but feel good enough to get back out there and put some thoughts together on the trip to the West Coast.

I’ll start with the game itself. There was a confident feeling coming from the players and coaches in the few days leading up to the game. All the reports we were getting out of the Clemson camp told us that the offensive coaches were confident in their game plan and they felt like they could score points on the Alabama defense.

Everybody knew that Alabama would focus on stopping the run and leave some of their corners in 1-on-1 coverage on the outside, and I loved the fact that the offensive staff took the tight end off the field in several situations and ran four wide receivers. Alabama didn’t have enough depth in the back end to cover all of the Tigers’ talented wideouts, and it showed.

Starting the day before the game, I kept hearing everyone was confident in a win. I spoke with Hunter Renfrow the other day and he said he felt like it was the best game plan the Tigers have had since he arrived on campus.

“I think Coach (Tony) Elliott and Coach (Jeff) Scott did a great job of calling plays,” Renfrow said. “But I told Coach (Dabo) Swinney in his hotel room two days before the game that this was the best game plan I’ve ever been a part of in my whole career at Clemson. Taking the tight end off the field and using more four personnel. Because whenever we used more four wide receiver sets, they tended to take a linebacker off the field and we just attacked them.” 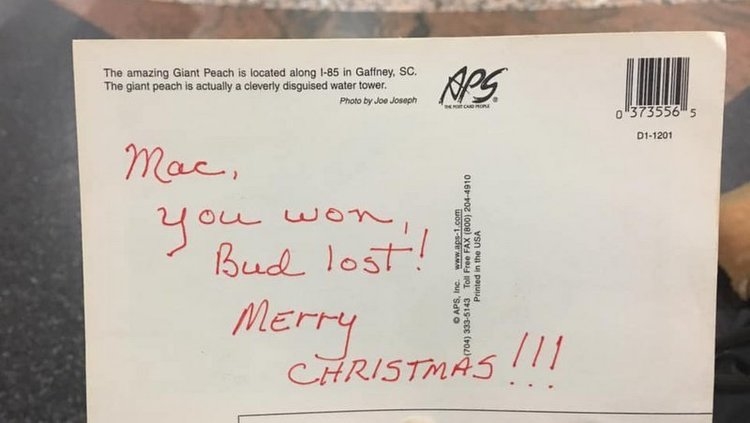 This postcard will probably make the trip to future games "

Clemson’s offensive line hasn’t gotten enough credit for the job they did on Alabama’s defensive line. That was one of the best games I’ve seen Robbie Caldwell’s group play, and it’s comforting to know that guys like Gage Cervenka, John Simpson, Tremayne Anchrum, and Sean Pollard will be back to anchor that line next season. Jackson Carman is going to be just fine at left tackle and guys like Matt Bockhorst and Blake Vinson will get their shots, along with freshmen Hunter Rayburn and Will Putnam.

*The day before the game, four of us braved the rain to do a little sightseeing around San Francisco. We parked at a spot overlooking the Golden Gate Bridge and trudged through ferocious winds and stinging rain to get a good photo of the bridge. When we reached the top, there were three Clemson fans starting their trek back down. One of them called my name and I realized it was Kristin Dawsey, a longtime friend from Mauldin, and she had a great story to tell.

Many of you might remember her dad, Bud Long, who owned Palmetto Car Wash in Mauldin. Bud was a dedicated Clemson graduate and fan but passed away back in 2012. Since then, Kristin has tried to make sure that something of Bud’s makes the trip to bowl and playoff and championship games. This year, however, Kristin found herself having to pack in a hurry and not only forgot her $2 bill stamps, but she also forgot to bring something of Bud’s on the trip, something she didn’t realize until they were on the plane.

The family had a layover in Denver, and as they exited the plane she grabbed her carryon bag, Kristin says she gutted the bag before the flight just to make sure she didn’t have any prohibited items in the bag, so she was surprised when she picked up the bag and laying on the floor under the bag was a postcard that her dad sent to her son Mac eight years ago. Tears filled her eyes as she realized Bud had made the trip after all, and now the postcard will probably make every trip from here on out.

*Nikki and I had to fly from San Jose to Charlotte on our way home but had a layover in New York’s John F. Kennedy airport. We were waiting to board the flight, along with about 100 Clemson fans, when Nikki struck up a conversation with another couple.

It turned out that they live outside of Columbia but went home to Nigeria for the Christmas holiday. Despite the fact that nobody there knew anything about Clemson or the football team, they managed to find a way to watch both the Cotton Bowl and the National Championship Game while in Africa. They told Nikki that people there had no idea why they were screaming and yelling, but that didn’t stop them from cheering on the Tigers and yelling for their son’s Alma Mater (he graduated in 2012).

I have more thoughts and notes from the week leading up to the game and hope to sprinkle those in this week (with a big recruiting weekend on tap).