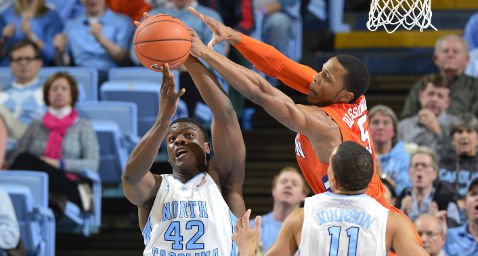 CHAPEL HILL, NC – Sunday night’s game between Clemson and North Carolina was your typical game between the two teams in Chapel Hill, and The Streak continues as a result.

North Carolina (12-7, 2-4 ACC) played one of its best games of the season and Clemson (13-6, 4-3 ACC) continued its feeble effort of the last week as the Tar Heels extended their winning streak over the Tigers in Chapel Hill to 57-0 with an 80-61 victory over Clemson at the Dean Dome. The Tigers lacked execution on both ends of the court and North Carolina jumped out to a big halftime lead in cruising to the win.

The Tigers had a 4-1 start in ACC play, but have now dropped two straight with games at Florida St., Syracuse and Notre Dame and a home game against Georgia Tech scheduled over the next few weeks. In fact, the last two losses have been arguably the worst of the Brad Brownell

K.J. McDaniels led Clemson with 13 points, while Adonis Filer and Landry Nnoko chipped in 12 apiece. The Tigers shot just 18-of-53 from the field, while North Carolina hit 31-of-56 from the floor. The Tar Heels also outscored Clemson 34-22 in the paint.

"I think we've lost some of our identity," Brownell said after the game. "We just aren't a very good offensive team in terms of shooting. But if we don't defend at a high level, we won't compete with elite teams. We just have to dig our heels back in and fight a little harder and get loose balls and rebounds. The things we do at home to use our crowd and help ourselves, we haven't been able to do on the road."

How bad was it? Clemson is one of the nation’s top defensive teams, giving up just over 54 points per game. North Carolina had 54 points with over 12 minutes left in the contest, and a Heel team that had struggled with field goal percentage all season shot lights out against a passive Clemson defense.

North Carolina jumped out to the early lead, but McDaniels hit two free throws at the 11:21 mark of the first half that made it 14-13 UNC. That was as close as Clemson would get.

The Heels went on a 17-3 run over the next seven minutes as North Carolina outworked Clemson on both ends of the court, getting to every loose ball and working harder than the Tigers in the paint. The Tigers went the first eight-plus minutes of the game without being called for a foul, but the fouls began to pick up in a big way as the Heels jumped out to a 31-16 lead on a 3-pointer by Nate Britt at the 4:02 mark.

The Tigers shot a paltry 6-for-26 from the field in the first half (23.1 percent) and the Heels had their largest lead in any ACC game of the season in taking a 37-21 lead into intermission.

Things didn’t improve in the second half – the Tigers went almost 13 minutes of game play without a bucket as North Carolina built a huge lead. McDaniel’s bucket at the 6:27 mark of the first half stood as Clemson’s lone field goal until a 3-pointer from Rod Hall

"We are still a young group, and we aren't physically dominating," Brownell said. "We have to scheme well and compete at an extremely high level. When we don’t do it we will get exposed, and that has happened against two good offensive teams this week."

The Tigers are back on the road next Saturday, taking on Florida St. in a 3 p.m. tipoff.