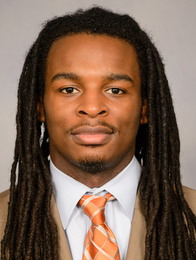 Guard
B I O
Overview
Signed in the late period with the program in the spring of 2011, he was one of five players to sign with Clemson in Brad Brownell's first recruiting class ... brings a physical, defensive mindset to the guard position, an attribute that has served him well in Brad Brownell's system ... two-sport athlete in high school, he was an all-state player in basketball and football ... does not shy away from contact on the offensive end, showing a good ability to draw fouls and finish strong at the rim ... has a 35.5-inch vertical, one of the best figures on the team ... has logged heavy minutes each of his three seasons, and was the only Tiger to start every game in 2013-14 ... has started all but one game over the last two seasons ... through three seasons, has played in 98 games for a total of 2,636 minutes, 26.9 per game ... leads all active Clemson players with 642 career points and 287 assists ... switched from jersey No. 4 to No. 12 after freshman season to honor a deceased high school friend ... recruited by Earl Grant ... majoring in community recreation, camp & sport management.

2013-14
Started all 36 games and logged 1,194 minutes, second on the team behind K.J. McDaniels ... led team with 143 assists ... second on team in scoring, he averaged a career-best 9.7 points per game as a junior ... made 110 field goals and 106 free throws, both second-best marks on the team ... reached double figures in 21 games after only four such efforts his first two seasons ... led or tied for the team lead in assists in 30 games ... improved from the free throw line, he shot 75.7 percent and helped Clemson lead the ACC in the category for the first time ever ... posted five or more assists in 12 games, including nine times against ACC foes ... improved three-point shooter, he shot 22-67 for a 32.8 percentage mark ... entered his junior season with just six career makes from long distance.

Best Games, 2013-14
Top performance of the season was his first career 20-point effort, in a win over NC State ... shot 6-10 from the field and 8-8 at the line ... posted 18 in the season finale against SMU in the NIT semifinals ... made 3-4 from long range and 7-7 at the line against the Mustangs ... posted 16 points in double overtime triumph over Maryland, including 10 in the two overtime periods ... added seven rebounds and five assists in that contest ... scored 16 points on 7-13 shooting and limited UMass star Chaz Williams to a 1-12 shooting performance in Charleston Classic final ... had 16 at Auburn, which included an 8-10 night at the free throw stripe ... tallied 14 points and four assists in win over South Carolina, he was 8-9 from the charity stripe in that game ... also had 14 in home win over Miami, with six assists ... posted 13 points and five assists with only one turnover in 37 minutes against Temple ... notched 13 on 5-7 field goals in the ACC Tournament quarterfinal against Duke ... posted 12 points and seven assists in Clemson's ACC road opener, a win at Boston College ... had 12 points and six assists in final home regular season game against Pittsburgh ... posted 11 in home win over No. 13 Duke, and followed with 11 in road win at Virginia Tech ... scored 10 points on 4-5 shooting versus Davidson in the Charleston Classic ... had 10 points at Arkansas.

Italy (August 2013)
Averaged 8.5 points per game in 21.3 minutes per outing over four contests against Italian club teams and all-star groups ... shot 50 percent from the field, showing an improved mid-range game ... posted 10 assists, third on the team ... had seven steals, fourth-most on the roster ... best game was the final against Airte, when he tied for team-high honors with 16 points on 8-10 shooting ... also had nine against Dream Team Italy when he was 4-6 from the floor.

2012-13
Played in all 31 games, with 30 starting assignments ... only game he did not start was at home versus NC State ... averaged 29.8 minutes per game, the second-highest figure on the team ... led team with 110 assists ... also led team with 1.83 assist-to-turnover ratio ... third on the team with 29 steals ... averaged 5.7 points per game, sixth-best on the team ... reached double figures on two occasions ... led or tied for the team lead in assists in 20 games ... played 20 or more minutes in every game ... posted five or more assists in 11 games, including six times against ACC foes ... ended season with an average of 5.0 assists per game over Clemson's last four contests ... fourth on the team in ACC games with 3.1 rebounds per game.

Best Games, 2012-13
Scored season-high 16 points in road loss at NC State ... made career-high seven field goals in 13 attempts versus the Wolfpack defense ... second-highest scoring total of the season was also on the road, at South Carolina ... produced 15 points in the win over the Gamecocks, making 3-5 field goals and 9-12 free throws ... added four rebounds and four assists in Columbia ... posted nine points and six assists with zero turnovers in 28 minutes at Furman ... scored nine points in 29 minutes against Purdue in the ACC/Big Ten Challenge ... posted career-best 10 assists in home rout of Florida A&M, in only 22 minutes of play ... posted six points and six assists versus SC State ... scored nine and added four steals against The Citadel ... posted six points and four rebounds at home against Florida State ... made 4-4 field goals and scored eight points and did not commit a turnover in 36 minutes of Clemson's home win over Virginia ... tallied five points and six assists with only one turnover at Florida State ... made 4-10 shots and scored nine points in Clemson's road win over Georgia Tech, while playing 29 minutes without a turnover ... posted six points and four assists at Virginia Tech ... ended season with seven points and five assists in 34 minutes versus Florida State in the ACC Tournament.

2011-12
Appeared in all 31 games for the Tigers, with nine starting assignments ... logged 519 minutes, more than any of the other first-year freshmen ... averaged 16.7 minutes per game ... averaged 3.8 points and 1.3 rebounds per game ... shot 44 percent from the field and 80 percent in limited attempts from three-point range ... shot 52 free throws, fifth-most on the team ... possessed a positive assist-to-turnover ratio (34-28) ... made 49 percent of his field goal attempts during ACC regular season play ... collected 14 steals and was a regular in the "jammer" role in Brownell's defensive scheme ... played double figure minutes in 22 of the 31 games, with a high of 39 in the overtime win over Southern Illinois ... scored at least two points in 25 of the 31 games.

Best Games, 2011-12
Top game was the overtime thriller in the second round of the Hawaiian Airlines Diamond Head Classic against Southern Illinois ... scored season-high 18 in that win, making 5-10 field goals and 7-9 free throws ... tied game in final seconds of regulation on a driving layup in which he was fouled and converted the free throw ... Tigers eventually won in overtime ... only other game in double figures was the ACC opener against Florida State, he posted 11 in that Tiger victory ... made 4-8 shots and 3-5 free throws, with four assists and three steals, against the Seminoles ... scored seven at The Citadel, making 5-8 at the free throw line ... posted seven at Iowa, making 3-6 shots ... had six points and three assists without a turnover in 34 minutes of play at home against South Carolina ... tallied five in win over Alabama State ... scored seven points at Boston College on 3-4 field goals ... posted six points in home win over Virginia, four of which came on late breakaway layups as the Tigers pulled away for the win over the ranked Cavaliers.