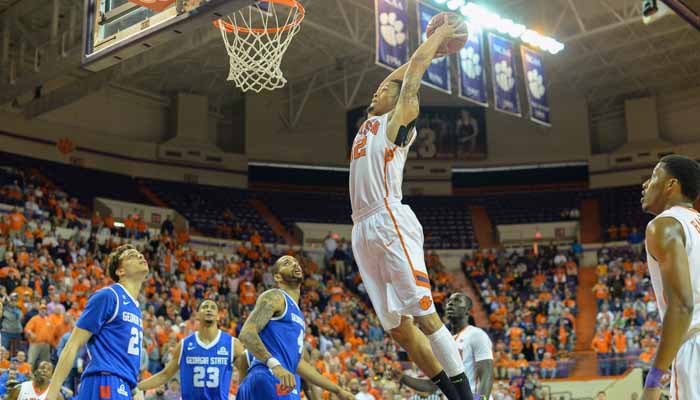 McDaniels scored 30 points, grabbed 14 rebounds and had five blocks as Clemson defeated Georgia St. 78-66 in the first round of the NIT Tuesday night at Littlejohn Coliseum in a physical contest that saw two technical fouls called.

The Tigers (21-12) will host the winner of Wednesday’s game between Illinois and Boston University. That game will be played at Clemson at a time and date to be announced.

The top seed in Clemson’s region – St. John’s – lost to Robert Morris earlier in the night, and second-seeded Illinois has to play on the road for the remainder of the season, so the Tigers will have home games over the next two games, only going to New York for the semifinals and finals provided they keep winning.

Georgia St.’s season ends with a 25-9 record. R.J. Hunter led the Panthers with 15 points. The Panthers had four players score in double figures.

The Tigers jumped out to a 9-3 lead and had several chances to put the Panthers away early; however, the Tigers got a little lazy on defense and the Panthers used a -9-0 run during one stretch late in the first half to take a 21-18 lead, causing Brownell to take a timeout.

The timeout worked, and McDaniels hit a 3-pointer from the left wing at the 3:40 that put Clemson ahead 27-23, and 40 seconds later Jordan Roper found McDaniels in the lane for a thunderous dunk, completing a 7-0 run that Saw the Tigers push out to a 29-23 lead with 3:16 remaining in the half. McDaniels had all seven of Clemson’s points in the run.

The Panthers once again made a small run, and Manny Atkins hit a 3-pointer with four seconds left in the half and the Tigers led 35-32 at intermission.

The Panthers began the second half the way they ended the first one, eventually taking a 40-39 lead on a dunk by R.J. Hunter at the 16:27 mark. The teams struggled offensively over the next five minutes, and Clemson led 50-49 after a jumper by Ryan Harrow at the 11:21 mark.

From there, however, it was a McDaniels’ highlight reel as he hit jumpers, blocked shots and even hit free throws after the Georgia St. head coach was called for a technical foul. Roper knocked down a 3-pointer from the left win, and Clemson had its biggest lead of the half at 62-52 with 5:56 remaining to play.

The Tigers got another 3-pointer from Roper two minutes later to take a 69-59 lead, and McDaniels followed that up by plucking a Panther shot out of midair on the defensive end. McDaniels, as he was falling out of bounds, flipped the ball to Roper who threw ahead to Harrison, and Harrison calmly drained a 3-pointer from the right win for a 72-59 lead with just 2:41 left on the clock.

The Tigers then hit enough free throws down the stretch to keep the Panthers at bay, and the Tigers must now wait for an opponent and a date for their next game.