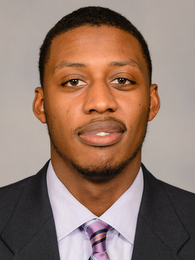 Guard
B I O
Overview
Senior wing player who transferred into the program from Brigham Young University after one season ... signed athletic aid agreement in August of 2012, and was awarded a waiver to play immediately in 2012-13 season ... originally planned to take a Mormon mission starting in the summer of 2013, but postponed those plans indefinitely ... worked hard to improve his game and saw it pay off down the stretch of his junior season ... has played 97 games, and needs just 287 minutes to reach 2,000 for his career ... has scored 538 points and grabbed 221 rebounds in his three seasons ... possesses quality size and athleticism on the wing ... improved as a shooter for the Tigers as a junior, he was an integral part of Clemson's NIT semifinal team ... originally from the Palmetto State, he played three years of high school ball in his hometown of Greenwood ... recruited by the Tigers originally, he took official visits to BYU, Clemson and Florida State as a fifth-year senior at the Christ School in North Carolina ... majoring in sociology.

Best Games, 2013-14
Top scoring performance came in the fifth game of the season against Davidson, a 20-point outing in the second round of the Charleston Classic ... made 8-10 shots, including 3-4 from three, against the Wildcats ... posted 17 points in NIT opener against Georgia State, connecting on 7-12 shots, while adding six rebounds in 29 minutes ... posted 15 points and made 5-7 field goals (3-4 from three) in road win over Georgia Tech ... followed with 15-point outing at Wake Forest ... scored 16 points in arguably most important performance of the season, the NIT quarterfinal against Belmont ... helped Tigers overcome late deficit by hitting 3-5 from three in that win ... scored 14 points in win over NC State ... posted 12 points against Miami in 29 minutes ... also had 12 in the ACC Tournament second round win over Georgia Tech, he made several key plays late in that game to help the Tigers to victory ... posted 13 points in early season road game against Arkansas ... posted 10 points in double overtime win over Maryland and hit a big three-pointer late in the second half ... posted seven points, three rebounds and three assists in ACC Tournament against Duke ... notched five points, six rebounds and five assists in solid all-around effort against Illinois in the NIT ... finished season on a high note with 10 points, three rebounds and three assists in 35 minutes against SMU ... began season with back to back double figure efforts, 10 against Stetson and 15 in win over Delaware State.

Italy (August 2013)
Averaged 11.0 points and 6.5 rebounds per game over the four contests ... ranked third on the team in scoring in 23.3 minutes per game, second-most on the roster ... reached double figures in one game, but had eight or more points in all four ... posted 18 vs. Vicenza All-Stars, the best team Clemson played on its trip ... made 4-5 from three and all six of his free throw attempts in that contest ... had 10 steals for the trip, tied for most on the team ... had eight rebounds against Indiana Pesre and Airte.

2012-13
Appeared in all 31 games and earned 14 starting assignments ... considered the team's fifth starter for the season with those 14 starts, one more than freshman Jordan Roper ... logged 668 minutes, 21.5 per contest ... shot just 36.3 percent overall from the field, but did shoot 73.9 percent at the free throw line in limited attempts ... made 10-11 in ACC regular season, 91 percent ... seventh on the team in scoring at 5.2 points per game ... averaged 2.8 rebounds per game, fourth-best on the squad ... possessed a positive assist-to-turnover ratio (35-to-26) ... collected 26 steals for the season, fifth-best on the team ... scored double figures in five games ... played double figure minutes in all but one game (at NC State) ... started 11 of Clemson's final 16 games, including seven straight at one point in mid-January through early February.

Best Games, 2012-13
Top performance of the season came in home win over Virginia Tech ... made 6-10 field goals, including 3-7 from three-point range, and totaled 19 points versus the Hokies ... played career-high 34 minutes in that win ... posted 11 points against Boston College at home ... made 4-9 field goals and added eight rebounds and three assists in a fine all-around 29 minutes off the bench in that game ... scored 15 points against SC State when he was 6-11 overall and 3-7 from long range ... posted 10 on 4-6 shooting against The Citadel ... also had 10 against Furman on the road early in the season, he made 5-8 shots in that win and added four rebounds and two steals in 18 minutes off the bench ... scored eight points at South Carolina and hit a huge three-pointer inside the final two minutes to help stave off a Gamecock rally ... posted eight points and three assists in home win over Georgia Tech ... made 3-4 field goals and scored six at Maryland ... posted seven in the ACC Tournament loss to Florida State, he made only 3-9 shots but contributed eight rebounds in 30 minutes of play.

2011-12 (at BYU)
Appeared in 30 games at an average of 8.8 minutes per contest ... scored 3.2 points per game ... added 13 steals, eighth-most on the team ... scored at least two points in 17 of the Cougars' games ... posted season-best 12 points in the second round of the NCAA Tournament, a win over Iona ... made 4-6 shots in that game, including 2-4 from three-point range ... tied season-high with 21 minutes played against the Gaels ... also scored in BYU's tournament loss to Marquette ... posted 11 points in win over Longwood ... contributed nine points in loss to Wisconsin ... scored eight against Baylor, including a memorable fastbreak dunk ... posted eight against Cal State San Marcos ... posted six points on three occasions, including versus Pepperdine and San Diego in West Coast Conference play ... had five points, three rebounds and two assists in a win over Gonzaga in February.

Before Clemson
Four-star prospect and the nation's No. 86 overall player in the class of 2011 according to Rivals.com ... No. 37 shooting guard prospect in the nation according to?ESPNU ... played in 2011 Jordan Brand Classic Regional All-Star Game ... played three seasons at Greenwood High School before reclassifying as a junior and finishing his last two years at the Christ School in Arden, NC ... helped Christ School to consecutive NCISAA AAA State Championships ... first-team all-state as a senior after averaging 12.7 points, 4.7 rebounds, 1.8 steals and 1.7 assists per game ... first-team all-Western North Carolina by the Asheville Citizen-Times ... played alongside Duke's Marshall Plumlee at Christ School ... shared team MVP honors with Plumlee in 2010-11 ... averaged 12.5 points and 5.0 rebounds per game as a junior on a team with six D1-bound players ... in his two years, Christ School had a 69-7 record ... played AAU ball for the Carolina Ravens ... coached by David Gaines at Christ School ... born Jan. 1, 1992.

It's time for a change in Clemson basketball...