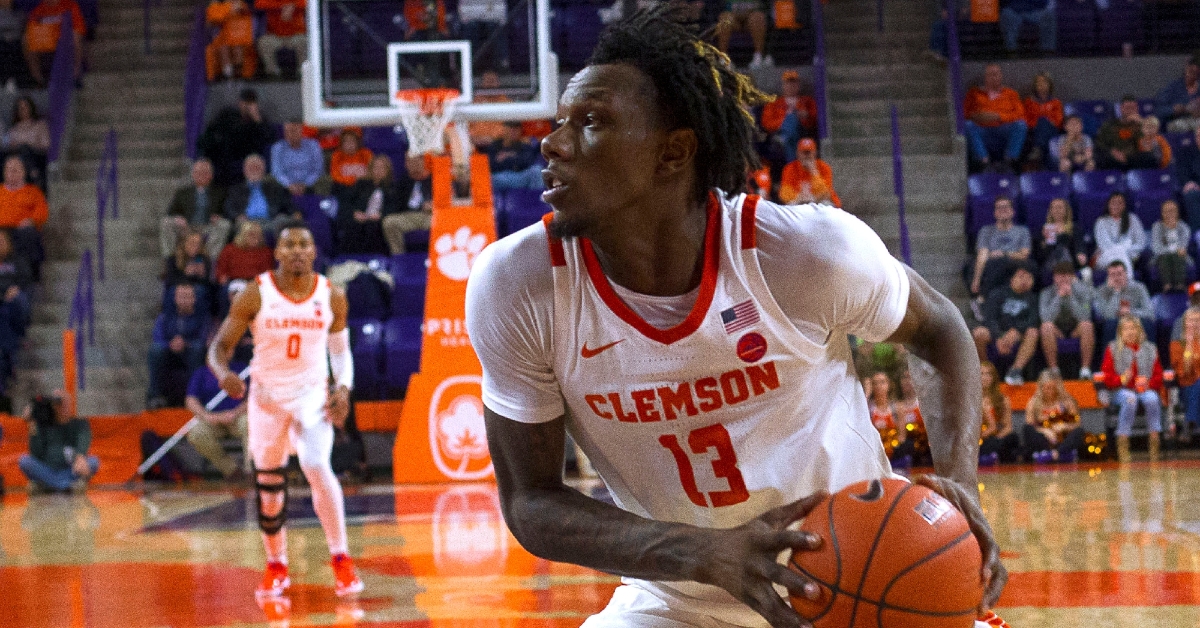 CLEMSON -The Clemson Tigers defeated the Syracuse Orange 71-70 in a thriller Tuesday night in Littlejohn Coliseum.

After trailing by 10 early in the second half, Clemson fought back and trailed by one with 11 seconds left. After Syracuse missed a shot of the in-bounds play, sophomore Khavon Moore pushed the ball up the court and dished it off to junior Clyde Trapp to give the Tigers a 71-70 lead and a victory over the Orange.

But the story of the night is not just about Clemson’s resiliency throughout the game, but also about graduate transfer Tevin Mack, who scored a career-high 32 points in the Tigers’ win.

Mack completely took over the game for his team in the second half, scoring 21 of the team’s final 30 points. The Syracuse zone did not seem to bother Mack at all, as he excelled in the high post for the Tigers.

“I had a good time playing there tonight. There was a lot of space in there. I made some right plays and my teammates found me and I was able to make some plays down the stretch to help us get that win,” Mack said.

At one point during a huge run for Clemson, Mack scored 16 of their 18 points. He began to heat up early in the second half once he got into the paint and made some tough layups.

“(I started to heat up) after I made the second or third layup and then I stepped out and made a couple of jumpers and I kind of just felt good from there,” Mack said.

"He was really one that I was worried about," Boeheim said. "He made some really tough shots. I thought we would play better defense against him, but we didn't, and then when we had our two guys foul out that got us into trouble. He had a good night."

Clemson head coach Brad Brownell said Mack - who also had 10 rebounds - did it on both ends for the Tigers.

"He was unbelievable. It started with him getting a couple of offensive rebounds," Brownell said. "I was on our guys about getting 'hustle points,' and that got Tevin going. Obviously, we started moving him down low. Aamir struggled at times but came back and played well at the end. I thought his defense was terrific. He played a great defensive game for us."

Part of Mack’s success came from the game plan that coach Brad Brownell prepared, but it also evolved while the game continued and allowed for the graduate transfer to get into a rhythm.

“We worked on that a lot in practice this week, getting the ball into the high post,” Mack said. “But also, when I got hot, I just kept going with it.”

Mack took a long path to get to Clemson. He started at the University of Texas, and then transferred to Alabama, and he is new to the Tigers this year. The career night he had tonight holds a special place in his basketball career.

“You know, it is special for me,” Mack said. “I am thankful for my teammates for finding me, without them it would not be possible. I was able to make some plays down the stretch and it was big for us.”

Mack will continue to play a huge role on this Clemson team as they head into the second half of the ACC schedule. His play is part of the reason the Tigers have bounced back from an 0-3 start and now sit at 5-5 in conference play. If the Tigers want to continue their good play, number 13 will need to play well.