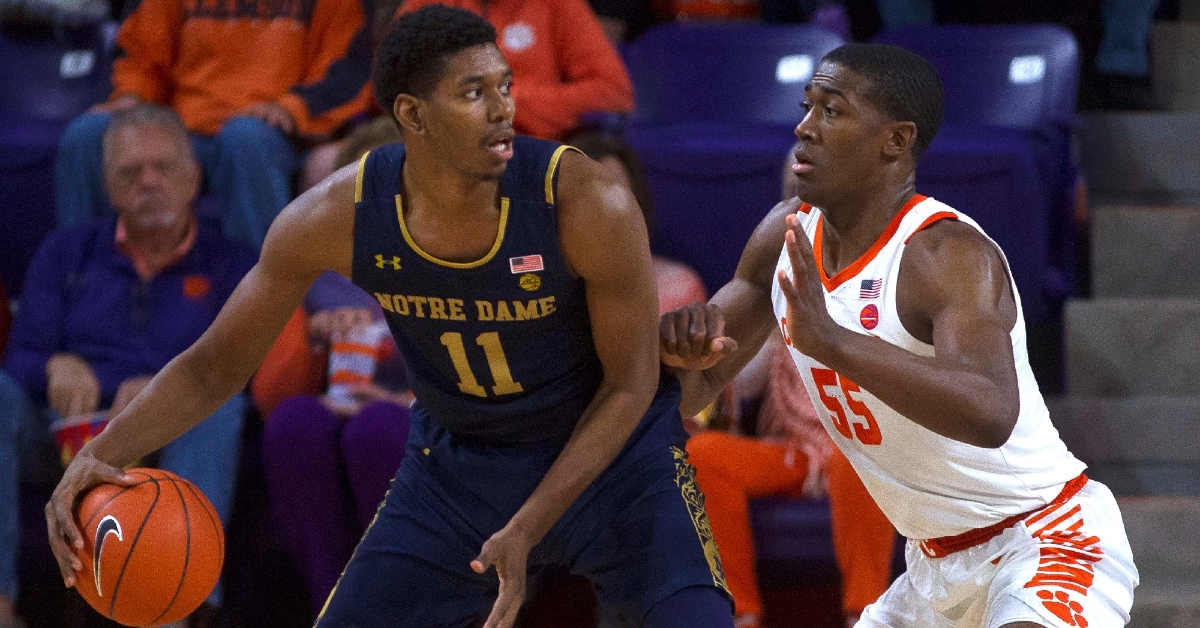 Hemenway came off the bench to score a career-high 16 points but Notre Dame had more playmakers down the stretch and walked away with a 61-57 victory at Littlejohn Coliseum Sunday afternoon. It was Notre Dame’s fourth consecutive victory while Clemson has lost three in a row.

Aamir Simms, the Tigers’ leading scorer, didn’t play because he was home with the flu.

"This was a disappointing, difficult loss because I thought we really battled defensively," Brad Brownell said. "We had a few breakdowns. We should've been a little smarter on defense, but [Notre Dame] has been scoring 80 points every game, and we held them to 61. We did a fantastic job. Give [Rex] Pflueger a lot of credit. He averages five a game, and he had 18. He made four threes. Offensively, we had some good looks. You just need to make more shots in these games to win. You can't shoot poorly and expect to win."

Brownell said he was pleased that Hemenway is able to contribute.

"He's a good player. Obviously, we were really disappointed with the high ankle sprain," Brownell said. "He was out for two months. That was hard for him, but he plays with offensive confidence. He shoots with a quick release. He's not afraid of making a mistake. He's got to get a little better defensively, but, moving forward, we're super excited about him. He's a guy who can score. He's going to continue getting better and better. He really stepped up tonight, and we really rode him in the second half."

Without Simms, Clemson struggled offensively in the early going. Notre Dame looked poised to run away with when Pflueger nailed a 3-pointer to put the Irish ahead 12-5 at the 14:33 mark of the first half. John Newman hit a jumper that made it 12-7 and both teams went cold, with the Irish going four minutes and Clemson three minutes without scoring.

The Tigers began to chip away and when Alex Hemenway hit the second of his two 3-pointers Clemson had a 20-19 lead at the 3:40 mark of the first half. The teams traded baskets for the rest of the half and Clemson took a 29-27 lead into intermission.

The teams were tied at 43-43 – with both going through a dry spell – when Mooney drained a 3-pointer from the corner and was fouled by Mack on the play. With just under six minutes to play the Irish held a 47-43 advantage. Hemenway hit another jumper to make it 47-45 and the Irish answered with another try to make 50-45. Not to be outdone Hemenway shook loose and drained a 3-pointer from outside the elbow to make it 50-48 with just under five minutes to play.

Coming out of a timeout, Hemenway hit two free throws to tie the score at 50-50, but the Irish scored the next four points to take a 54-50 lead with 3:14 to play. Trey Jemison worked his way free for a dunk that made it 54-52, but the Irish scored the next five points, and Pflueger’s 3-pointer forced Brownell to call a timeout with Notre Dame leading 57-52 with just 1:01 left to play.

The Irish were able to hold on down the stretch.

Clemson returns to the court Wednesday with a 9 pm tip at Pittsburgh (RSN). Clemson then returns home to take on Louisville at 4 pm Saturday (ACCN) in Littlejohn Coliseum.

Clemson vs. Notre Dame box
Get the latest Clemson gear right here!
Comment on this story