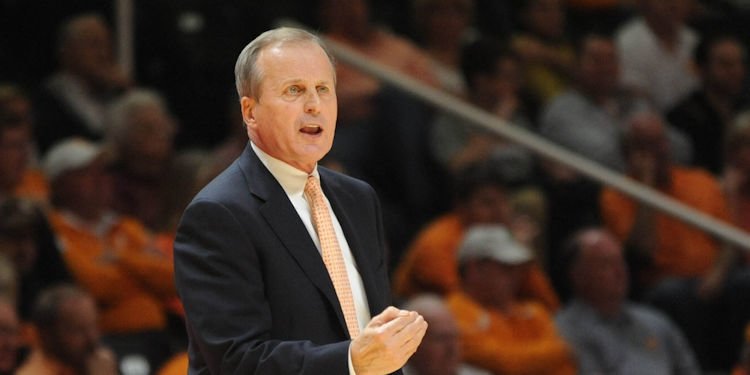 Rick Barnes and Brad Brownell go way back – probably further back than Barnes even knows.

The past Clemson basketball coach, in Barnes, met the present, in Brownell, in a special exhibition Sunday between Tennessee and Clemson to raise funds for the Salvation Army’s efforts in hurricane relief.

The two coaches’ paths crossed first while Brownell was on the road recruiting as an assistant at UNC-Wilmington in the mid-90s, when Barnes coached the Tigers from 1994-98.

“He probably wouldn’t even remember that,” Brownell told TigerNet. “I actually went to a clinic back in the day in Myrtle Beach when he was the head coach at Clemson. From there, when this job came open (in 2010) – I got in touch with him…I got a hold of coach Barnes and talked a lot to him about the job.

“We’ve kinda stayed in touch since then. He’s always been very good to me and I’ve appreciated that. I have all the respect in the world for the job he’s done. He’s been a great coach at a lot of different places.”

Barnes left Clemson for the University of Texas in 1998 after three consecutive NCAA Tournament appearances. He went on to coach 17 seasons with the Longhorns with 15 20-win campaigns and 16 NCAA Tourney bids. He's in year three now with Tennessee seeking a first Big Dance trip.

In his first game back in Littlejohn Coliseum since 1998, Barnes called Clemson “a special place,” while backing a Tigers head coach he calls a friend.

“I wish nothing but the best for Clemson because this place is a special place to me and always will be,” Barnes said. “Brad is a friend and I think he does a tremendous job. It can be a tough job, as I know, but they can never find a better basketball coach than Brad Brownell.”

Brownell said he valued catching up with Barnes over the last couple weeks putting Sunday’s exhibition together.

“He had some great memories (at Clemson),” Brownell said. “He’s a character now, so he’s a great storyteller and a prankster – a guy who any place he leaves, he’s gonna have left a mark. I know he’s fond of a bunch of the players he’s coached here. It was a big job at the time for him and he was very excited about the opportunity.

“There’s no question that he had some great times here and some great memories and it was good to be able to have him come back.”

One of those players is now Clemson’s director of player development, Terrell McIntyre, who was among a group of Barnes’ former Tigers to reunite with him Sunday.

“It’s a special time to see him. It’s been a long time since I’ve seen him,” Barnes said. “One of the toughest kids I’ve ever coached and I’m happy for him and I’m happy for Brad and Clemson to have him on the staff.

“He’s a big part of my life here and it was great to see him and his family.”

The way Sunday’s reunion came about was a special waiver from the NCAA for teams like Clemson and Tennessee to add an extra exhibition game to benefit charities. By halftime, the announced donation was $5,100.

Typically major conference teams will play closed scrimmages, which made a game in front of a crowd extra valuable for both coaches.

“I’m very appreciative that Brad was willing to do it on such quick notice,” Barnes said of a 71-67 Volunteers win Sunday. “I think that the game will end up helping us both a lot in the fact that we’ll both learn a lot of things. I have so much respect for how hard his teams play and he does a terrific job with his team. I don’t think we could have asked for a better situation with a game like this.

Brownell says the game’s purpose off-the-court provided some perspective for him and his players moving forward.

“What happens is the relief efforts are still going on and we all go back to our real world and follow Clemson football after a great win or basketball is getting ready to start and we forget there are some people really struggling,” Brownell said. “This is a nice reminder too for your players that we’ve got it really good. To be able to have a game like this and see an old friend like Rick Barnes and bring him back – then to be helping some folks – it’s pretty cool.

"I really want to applaud the NABC (National Assocation of Basketball Coaches) and the NCAA for allowing this to happen.”