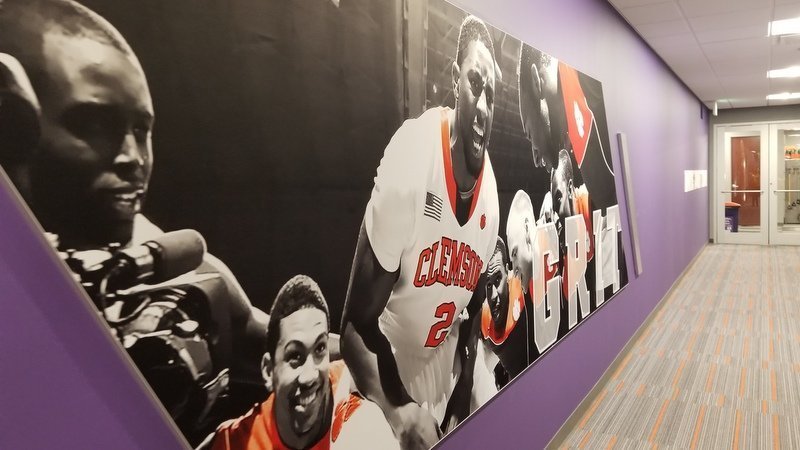 Terrence Oglesby shares a moment with the family of Demontez Stitt

Those two words were a driving force behind Clemson’s thrilling run to the Sweet 16 this past season, a mantra that took a life of its own. It didn’t start this season, however, not in the mind of head coach Brad Brownell.

No, Clemson Grit started the first time he laid eyes on a skinny guard named Demontez Stitt, a guard that would become one of Brownell’s favorite players.

Stitt was five hours short of receiving his degree in Parks, Recreation and Tourism Management when he left to go play basketball overseas following his senior season. Stitt passed away two years ago while he was home in North Carolina following his basketball season in Europe.

This week, the university awarded Stitt his degree, posthumously.

“It’s a really cool, special day. I didn’t have a lot to do with it but we got together and talked to Leslie Moreland our academic advisor. The one that gets the biggest amount of credit is Terrence Oglesby, and what is most cool about it to me is we have Terrence coming back and getting his degree and he thought about one of his teammates. He came up to me and said, ‘Hey coach, I want to see what we need to do’ and I said yeah, I think we can get this done.

“He talked to President Clements and President Clements gave him a little direction, and I think he had to send an email and meet with someone and tell his deal. That’s really all there is to it. He did a little paperwork, pushed it, and got it through. I think it’s really neat that one of his former teammates who is back getting his degree thought about it. It’s been a fun go around to get his degree and now he wants to make sure Demontez gets his, so we helped get it done.” 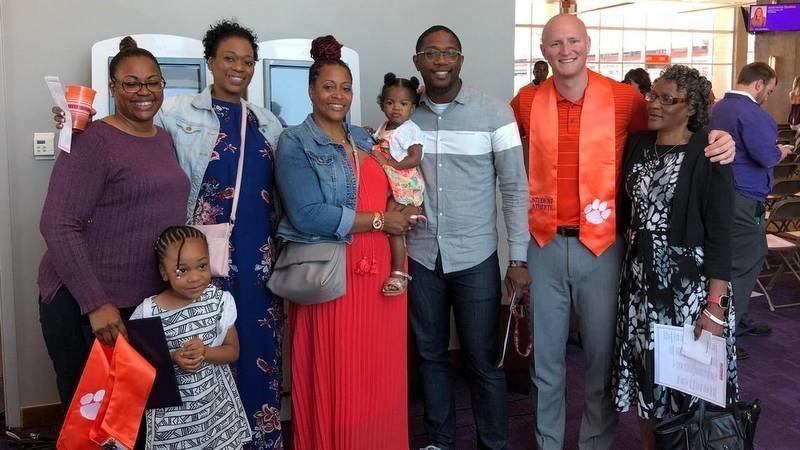 Terrence Oglesby shares a moment with the family of Demontez Stitt "

Stitt was a senior when Brownell took over the Clemson program, and he left one course shy of getting his degree in order to pursue his professional dreams. Brownell constantly reminded Stitt that he needed to come back and finish his education, something that Stitt promised would happen.

“It’s something that just feels good. We know he eventually would have done it, and I’m really proud of Demontez,” Brownell said. “He’s was one of those guys that really wanted to be coached, he and I really connected during our year there and obviously kept in touch, so it was really special to see his mom and grandmother, and his daughter, and fiancé, just to see them all there sharing that with him was very special.”

Stitt was the perfect example of Clemson Grit.

“He was a guy who embodied Clemson Grit, he was a guy who always persevered, never backed down from a challenge, and was always trying to get better, was extremely competitive, and got the most out of his ability,” Brownell said. “I think that was one of the reasons he and I connected so well. Right when I got the job the first thing I did was bring him and Jerai (Grant) over. Jerai was much more of a laid-back, chill guy and Demontez was much more fiery. You could find his competitive spirit really quickly and he and I are both like that, so we just connected really well.

“I think that’s one of the reasons we kept in touch and he wanted to constantly have a relationship with his head coach, you know with me. He would always text and call and I would do the same and I appreciated the fact that as a new coach he was allowing me to coach him the way I wanted to. For whatever reason, we hit it off great. I was always on him about coming back and finishing this thing and he promised me he was going to do it. So, it was just kind of a neat thing that again this could get done and that he was so close, and what I think is even more special about it is that one of his teammates helped it get done as well.”