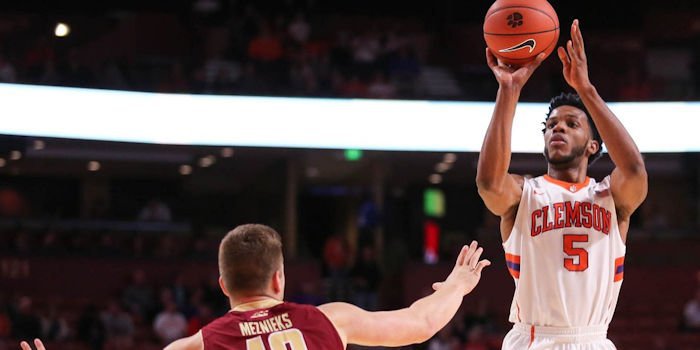 The Eagles pulled to within four at 52-48 with 7:29 to play, but Clemson outscored them 13-6 over the final minutes to seal the victory.

"Hard fought. Give the Boston College kids a lot of credit," Clemson head coach Brad Brownell said. "We got off to the great start and we're up two and then we struggled. They made shots and we gambled some defensively early. We went for some steals and missed them and every time we did they'd find the open man and shoot it in. I thought we had better defensive discipline in the second half. Avry was by far the man of the match. He was the guy that really defended at a high level. He's done that a lot this year. He really guards hard and sets the tone. He fought Eli Carter and I thought our five men did some good things on ball screen defense. We were just good enough offensively. We made enough three's late. We probably took a few too many three's early. They changed their defense a bunch and threw us out of rhythm a little bit. We adjusted better the longer the game went and found a way to win with our defense again which is encouraging."

The Tigers looked like they might run the Eagles out of the building early, capitalizing on a couple of early 3-pointers in racing out an 11-2 lead. Boston College then went on a 19-9 run over the next ten minutes that saw the Eagles take a 21-19 lead with just over five minutes to play in the half.

Clemson fell in love with the 3-pointer – shooting 14 in the half – and Boston College packed the zone inside as Clemson’s offense stalled. The Tigers eventually found a little rhythm and Blossomgame’s one-hander with just over two minutes to play gave the Tigers a 31-28 lead.

Boston College hit two 3-pointers over the final 1:57 of the half and led 34-31 at intermission.

The Tigers scored the first six points of the second half for a 37-34 lead, but Boston College got a 3-pointer and two dunks inside to pull ahead 41-37. Clemson then went on a 12-2 run over the next five minutes to claim a six-point lead at 49-43, the last points coming on a spinning jumper by Holmes in the lane.

Boston College head coach Jim Christian re-inserted 7-footer Dennis Clifford into the game, and Clifford’s presence enabled the Eagles to pull back within three at 49-46. Boston College had a chance to cut further into the lead, but a block on one end and hustle by Gabe DeVoe on the other – he followed his own missed shot and poked it away from Clifford – led to Grantham’s 3-pointer from the corner for a 52-46 lead with 8:18 to play.

With Clemson leading 52-48, Holmes hit a 3-pointer from the right wing for a 55-48 advantage. On the other end, Clifford’s jump hook fell short of the rim, and as he complained to the officials, Blossomgame settled in on the left wing. He drained another 3-pointer for a 58-48 lead, and the Eagles called timeout with six minutes to play.

Boston College could get no closer than eight the rest of the way.

The Tigers play three of the final four games on the road, starting Saturday with a 3 p.m. tipoff at N.C. State. The Tigers play at Georgia Tech next Tuesday, host Virginia a week later and finish the regular season on March 5th at Boston College.

Brownell said the Tigers have done well at their home away from home this season.

"I think it's normal. I think the home team plays a little bit better," he said. "You feed off of your crowd. There's some guys on the team that just play a little bit better. Our Virginia Tech game was a hard-fought battle, a lot like these last two games and we ended up a play short. We had a couple of chances late with a three that went in and out when we were up one and we missed a free throw to tie. When you go on the road, you're trying to put yourself in a position to win a game and then hopefully your guys are good enough to do it and you execute well enough down the stretch. N.C. State is going to be a tough one. Cat Barber is unbelievable. They've got big, strong guys inside that are physical. They've shown they can play really well at times and they've got all week to get ready. We anticipate a tough game."