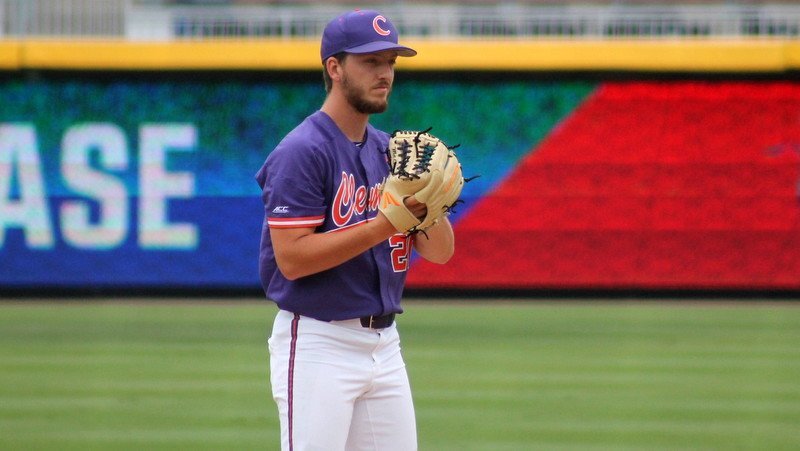 Clark was masterful in the win over Louisville

DURHAM, NC – Heading into Thursday’s contest against top-seeded Louisville, Clemson needed a win to enhance its NCAA Tournament resume, a big performance on the mound, and clutch hits with runners in scoring position.

Check, check, and check, with the big performance on the mound coming from lefty Mat Clark, who pitched eight strong innings as Clemson defeated No. 7 Louisville 7-1 Thursday at Durham Bulls Athletic Park in the finale of pool play for Group A. Neither team will advance to Saturday’s semifinals – that honor belongs to Boston College.

Clark flirted with the 15th no-hitter in school history and the first since March 18, 2009, when Justin Sarratt, Scott Weismann, Kyle Deese, Tomas Cruz, and Matt Vaughn combined to no-hit South Carolina Upstate in a 14-0 Tiger win. It would've the first no-hitter by one pitcher since Scott Parrish beat The Citadel in March of 1984. The last 9-inning no-hitter in Clemson history happened when Jeff Gilbert blanked Western Carolina in March of 1982.

The Tigers, sitting squarely on the bubble, failed to scratch a run against Cardinal starter Reid Detmers in the first two innings but broke through in the third. Bryce Teodosio drew a one-out walk and moved to third on Michael Green’s double to center. Logan Davidson walked to load the bases, but Grayson Byrd struck out for the second out.

That brought up Kyle Wilkie, who smoked a two-run double off the wall in left for a 2-0 lead. Davidson was thrown out at home trying to score on the play.

The Tigers added three more runs an inning later. Jordan Greene reached on an infield single and moved to second on Sam Hall’s single to left. Justin Hawkins hit the first pitch he saw over the wall in left for a three-run homer and a 5-0 lead. The homer was Hawkins’ fourth of the season.

Detmers was the ACC Pitcher of the Year, but his day was done after four innings – he gave up five hits, five runs (all earned), struck out seven and walked two. The start was similar to the loss Detmers took against Clemson in early April. He pitched a scoreless first two frames in that start but gave up five runs in six innings. For the season, Detmers has given up 10 earned runs to the Tigers in 10 innings.

Wilkie homered over the wall in left – his fifth of the season – to give Clemson a 7-0 lead in the top of the seventh.

Zach Britton homered to lead off the ninth for the Cardinals, and a throwing error and a walk ended Clark's day. He pitched eight innings, allowing one run on one hit while walking two and striking out three. He threw 92 pitches, 60 for strikes. Jacob Hennessy relieved Clark and shut the door on any comeback.

The Tigers will now head home and await their NCAA fate. The win pushed them to No. 36 in the RPI rankings as of Thursday afternoon.