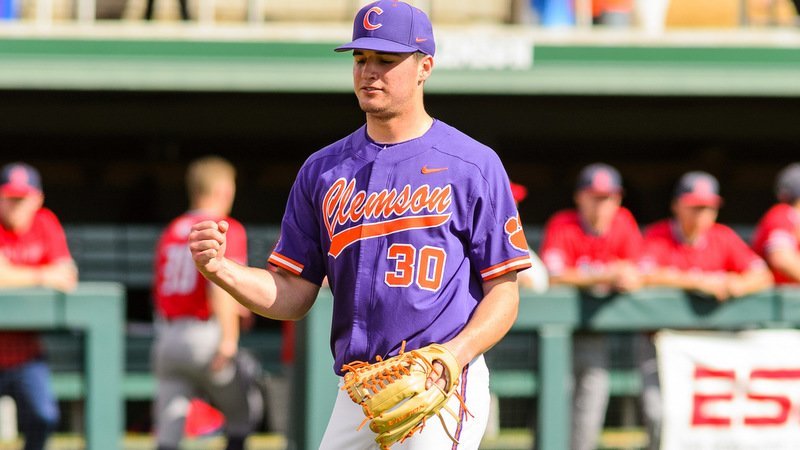 Sharpe homered twice and drove in all three Clemson runs but the rest of the Clemson offense went cold as South Alabama salvaged the finale of the three-game season-opening series with a 4-3 victory Saturday evening at Doug Kingsmore Stadium.

Clemson won the first game of the doubleheader Saturday 7-2 to clinch the series.

Neither team mustered much offense through the first three innings, but freshman Tiger starter Justin Wrobelski ran into trouble in the fourth.

A single and a hit batter put runners at first and second to start the inning. A wild pitch moved both runners up a base and into scoring position, but Wrobleski notched a strikeout for the first out. That brought up Felix Aberouette, who launched a 0-1 pitch over the wall in left-center for a 3-0 lead. Wrobleski escaped the inning without further damage.

The freshman Sharpe (1-0) earned the win in his first game Saturday, allowing just two hits, no runs and two walks with eight strikeouts in 5.0 innings pitched. In the nightcap, Sharpe batted fifth as the designated hitter, and he continued his big day with a long, solo homer to left that made it 3-1.

The Jaguars picked up another run in the fifth. Michael Sandle hit a windblown, one-out triple off the wall in left and scored on Santi Montiel’s infield single to make it 4-1.

Wrobleski’s day was done after two batters in the sixth. He pitched 5 2/3 innings in his Clemson debut, giving up four runs (all earned), walking one and striking out eight.

Sharpe brought the Tigers closer in the bottom of the sixth. Grayson Byrd led off the inning with a four-pitch walk, and the Jags took out reliever Jess Dalton in favor of righty Tyler Perez. Sharpe smoked a 2-1 pitch from Perez over the wall in right-center for his second homer of the game, a 383-foot bomb that brought the Tigers to within one run at 4-3.

The Tigers' Teodosio doubled with one out in the bottom of the ninth, stroking a double off the wall in the left-centerfield gap, and took third when the cutoff throw was bobbled. However, Chad Fairey struck out on a called third strike for the second out and Sam Hall struck out swinging to end the game.

Clemson is scheduled to return to action Tuesday when they host Charlotte at 4 p.m. A quick turnaround sees the Tigers host Tennessee Tech at 4 pm Wednesday.