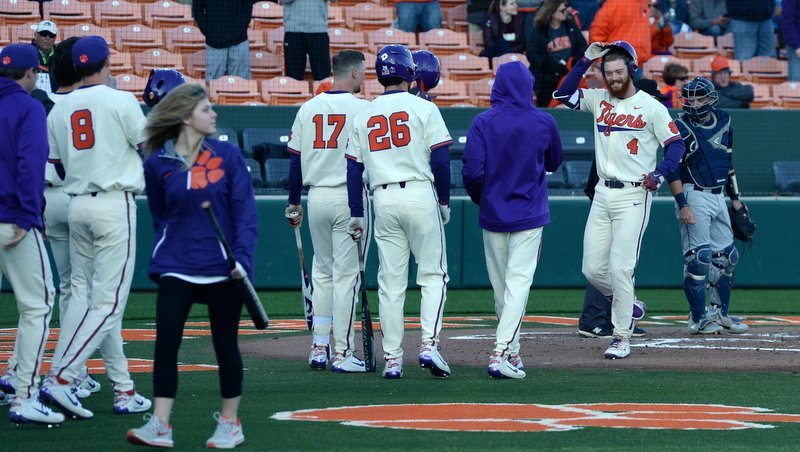 CLEMSON – Monte Lee’s baseball team appears to be getting hot at the right time.

Grayson Byrd and Kyle Wilkie both homered and continued their hot-hitting ways as No. 8 Clemson defeated Presbyterian 14-4 at Doug Kingsmore Stadium Wednesday night. Clemson has won five in a row and improves to 31-11 on the season while Presbyterian falls to 13-30.

Clemson had 12 hits and also took advantage of four batters hit and 12 walks and have walked 23 times in two games this week. The 13 runs ties a season-high. Presbyterian used 10 pitchers in the contest.

Clemson travels to Charlottesville to take on Virginia in a key ACC series this weekend. Clemson trails NC State by just one game in the ACC Atlantic standings. The Cavaliers are 4-3 in their last seven games and are 24-17 overall.

Wilkie helped get things started in the second, drawing a one-out walk. He moved to third on Drew Wharton’s single and came around to score Sam Hall’s RBI single to left-center.

The Blue Hose took a short-lived lead in the third, taking advantage of three straight hits to open the frame, scoring two runs for a 2-1 lead.

Davidson singled to start the third and then stole both second and third. Chris Williams walked and also stole second, setting up Byrd’s fifth homer of the season, a shot to left-center that gave the Tigers a 4-2 lead. Following a pitching change, Wilkie homered for the second straight night and Clemson led 5-2.

Seth Beer was hit by a pitch in the fourth and moved to third on Williams’ double down the left field line. Byrd walked to load the bases and Wilkie walked to drive in a run for a 6-2 lead.

Hall singled to start the Clemson fifth, stole second and scored on Jordan Greene’s single to right. Greene moved to second on the throw to the plate, Davidson walked and Williams was hit by a pitch. Byrd drew yet another bases-loaded walk to score a run for an 8-2 lead and Davidson scored on Wilkie’s single to right that made it 9-2. The Blue Hose escaped further damage because Williams was thrown out at the plate to end the frame.

The Tigers continued to pile on in the sixth. Wharton started the inning with a double down the left field line and Greene drew a one-out walk. That brought up Davidson, who singled to right to score Wharton for a 10-2 lead. That brought up Beer, who launched 3-2 pitch over the wall in right for a 3-run homer, the 45th homer of Beer’s Clemson’s career.

Clemson vs. PC box score
Get the latest Clemson gear right here!
Comment on this story