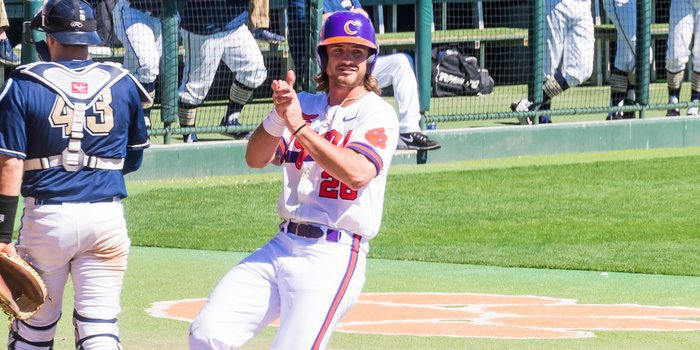 The teams entered the bottom of the eighth tied at 3-3, and Rohlman walked to lead off the bottom of the frame. He moved to second on Weston Wilson’s sacrifice bunt and moved to third on a wild pitch that reached the backstop. Greene stepped in and delivered a sharp single to short that scored Rohlman with the game-winner.

Pat Krall pitched the final 4.1 innings, giving up just one hit in improving to 3-0 on the season.

"Just very proud of my ball club today and how well we responded. We obviously had a tough ballgame yesterday where we did not play well at all," head coach Monte Lee said. "I thought today we played really, really well and it all started with Alex Eubanks. I thought he threw the ball well. He gave us a chance. Looking at the box, no walks. He threw strikes and forced them to swing the bat. We had a little bit of tough luck in the first inning, but Alex still made very good pitches. Defensively, I thought we played a solid game outside of two miscues. I thought the key for us today was our pitching was really good.

"Pat Krall was, again, outstanding. How about the bottom of our order? In the sixth inning we had the bases loaded and nobody out and we had back-to-back at-bats where we failed to get a run in, and Chris Williams delivered with a huge two-out single to score two and tie the ballgame. It was a 3-1 game at that point and we tie the game up. Reed Rohlman there in the eighth inning with a leadoff walk gets to second and then to third on the passed ball. They pull the infield in and baseball is a game of inches. Jordan Greene delivers the blow - two strikes and a base hit up the middle just off the tip off LeBlanc’s glove to score the run and then we shut it down in the ninth and find a way to win it." 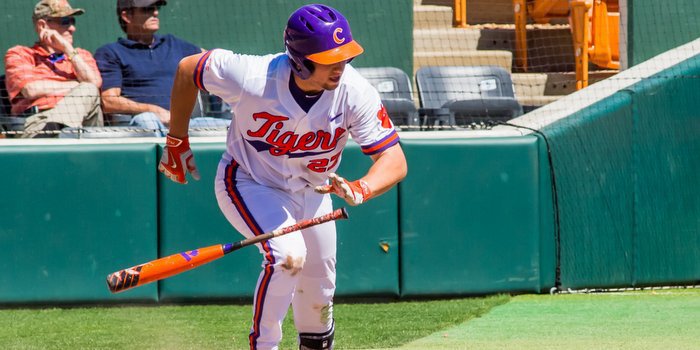 The Panthers opened the scoring in the first off of Eubanks. Charles LeBlanc singled with one out and scored on a double by Nick Yarnall for a quick 1-0 lead. The Tigers answered in the bottom of the third. K.J. Bryant singled with one out, moved to second on a Chase Pinder walk and both runners advanced on a throwing error by the second baseman.

Eli White struck out looking for the second out, but Chris Okey singled into the hole between short and third. The singled scored Bryant to tie the score at 1-1.

The score stayed that way through four innings, but the Panthers took advantage of Clemson’s porous defense in the fifth. Manny Pazos singled to left to begin the frame and moved to second on a wild pitch. Eubanks induced a liner to right from Jacob Wright, but Bryant dropped the ball for a three-base error that allowed Pazos to score for a 2-1 lead. LeBlanc dumped a single into left to score Wright and the Panthers had a 3-1 lead.

Eubanks was replaced by Krall, who got out of the inning without further damage. Eubanks went 4.2 innings, giving up six hits, three runs (two earned) with four strikeouts and one hit batter.

The Tigers finally broke through against Pitt starter Aaron Sandefur in the sixth. Okey walked to lead off the inning, and that was followed by a rocket single to right off the bat of Seth Beer. The single extended Beer’s hitting streak to 24 games, good for sixth-longest in Clemson history. Rohlman walked to load the bases, and Sandefur’s day was done. He was replaced by Isaac Matson, who induced an infield pop from Weston Wilson for the first out.

That brought up Greene, who struck out looking for the second out and it looked like the Tigers would waste another scoring opportunity. Enter Chris Williams, who laced Mattson’s first pitch into right-center for a two-run single, tying the score at 3-3.

The Tigers play at Georgia Tuesday night at 7 p.m., then travel to Duke for a three-game series next weekend.

"Anytime you can win the rubber match on a Sunday, it gives you confidence going on the road," Lee said. "We’ve got a tough test ahead of us over the course of this next week, but we’re just going to get ready for the next ballgame. I wasn’t necessarily worried about the road moving forward. I was worried about trying to beat Pittsburgh today. You’ve got to give our guys credit because they did it today. They did it based on their competitiveness. We stayed in the game. We didn’t get down mentally when we were down by two runs. We found a way to get it done and that says a lot about us. I’m very, very happy for my team today."