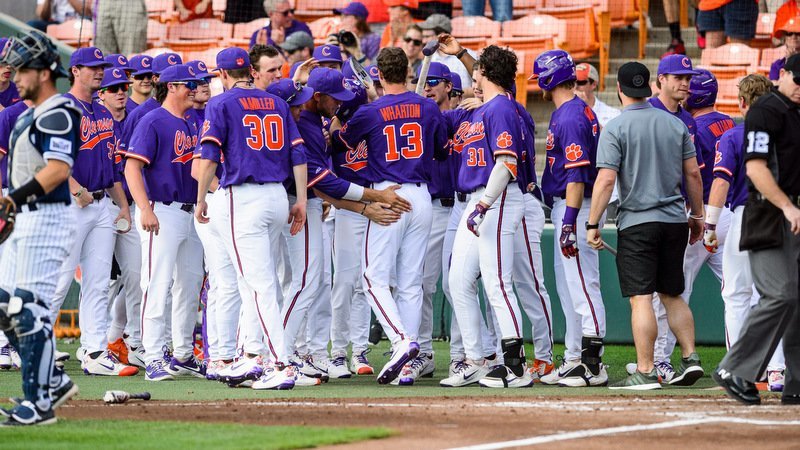 Teodosio rounds the bases after the first homer of his career

CLEMSON – Warm weather moved into the area last week and Clemson’s bats got warm at the same time.

Clemson scored nine runs – seven off a pair of home runs by senior Drew Wharton and a solo shot by freshman Bryce Teodosio to beat Dallas Baptist 9-1 and take the series.

After accounting for just 23 RBI and no home runs in 78 career games, Wharton has hit three home runs and driven in eight in the last two games.

Junior righty Brooks Crawford earned his second win of the season pitching five scoreless innings and sitting down 12 in a row after giving up two first-inning hits.

Clemson didn’t waste much time getting the bats going in game two of the series.

Chris Williams led off the second inning with a walk and advanced to third on a single through the right side by Robert Jolly. Wharton continued his hot hitting with his second home run in as many days. One batter later, freshman Bryce Teodosio launched the first homer of his career to left field, giving Clemson a 2-0 lead after two innings.

Clemson continued the onslaught in the third inning. The Tigers started the third with back-to-back walks by Seth Beer and Patrick Cromwell, who both advanced their positions on a wild pitch. Jolly singled to right field, scoring Beer from third. Wharton knocked a 0-1 pitch over the left field wall for his second homer of the game – and the third of the season – to put Clemson ahead 8-0. 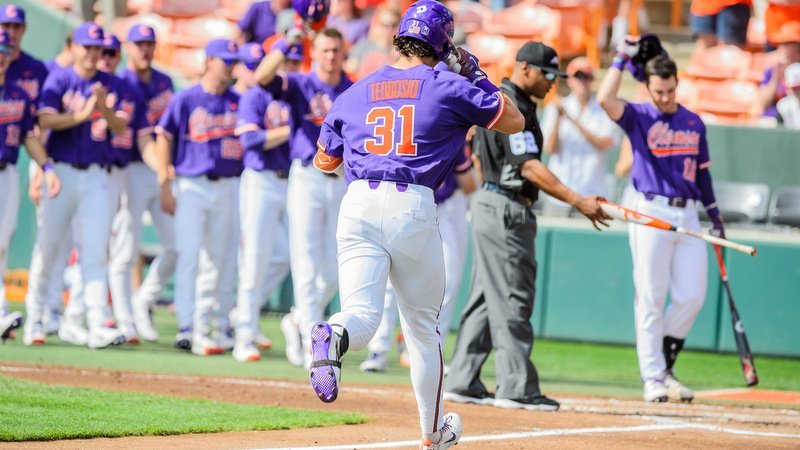 Teodosio rounds the bases after the first homer of his career "

Dallas Baptist’s starter, Jordan Martinson, only last 2.1 innings. He gave up seven runs – all earned – on four hits. He walked three and struck out three in just 56 pitches.

The Patriots threatened in the sixth inning after earning back-to-back walks, but Carson Spiers slammed the door on any momentum Dallas Baptist had with a strikeout and a lineout to first base.

With freshman Spencer Strider on the mound, the Patriots finally put together a little offense. Glowenke earned a one-out walk and advanced to second on a balk. Funderburk singled down the left field line to put runners on the corners with just one out and a walk loaded the bases. A sac fly plated Dallas Baptist’s first run of the game, making it an 8-1 Clemson advantage in the seventh inning.

Clemson answered in the bottom half of the inning with a run of its own. Kyle Wilkie laced a two-out single off the wall in left and came around to score on a Logan Davidson single and error on the right fielder to give Clemson a 9-1 lead over the Patriots.

Spencer Strider pitched the final three innings to pick up the first save of his career.

The three-game series concludes Saturday evening with the second game of the doubleheader. Clemson returns to action Tuesday at 4 p.m. as they host Winthrop before a three-game set against arch-rival South Carolina.