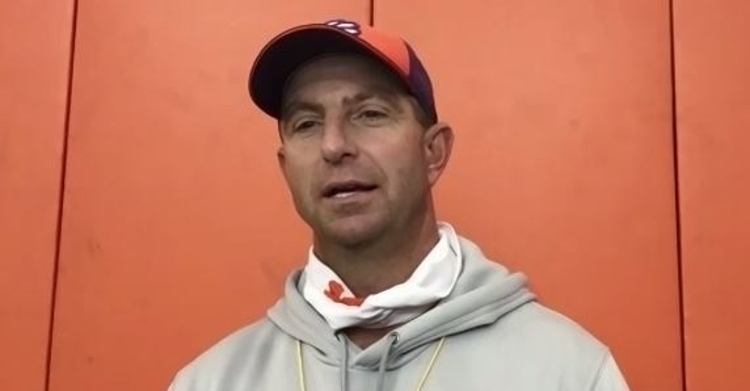 The weather in Clemson felt a lot like fall Wednesday and the Tigers practiced for two hours in advance of this weekend’s matchup against Virginia. Head coach Dabo Swinney is also continuing to water the bamboo.

*Dabo said the team is as healthy as its been since camp started and everybody should be with the team this weekend.

*The team celebrated the 70th birthday of Woody McCorvey today. The first time he saw Coach McCorvey was 30 years ago and McCorvey was a 40-year old wearing cowboy boots (and the wide receivers coach at Alabama). They have been together since then.

*Swinney said Virginia is playing with a lot of confidence and is a dangerous team.

*Virginia has a 6-7 receiver and a 6-7 tight end, and Swinney was asked about how the Tigers will try to match up with all that length. He said both players will have to be challenged at the line of scrimmage and then you have to battle them for the ball at the point of impact. You have to play very physical against guys like that.

*He said a lot of the players – like Greg Williams – are like bamboo. You can water them every day for three or four years and see nothing and then they will grow 90 feet in six weeks. A lot of players like that have come to the program and bloomed later.

*Likes what he has seen out of the secondary and is excited to see what they can do with the full complement of players this week with Mario Goodrich back. Said Sheridan Jones has played really well.

*On Joseph Charleston, Swinney said they could see his growth coming. Same thing with Lannden Zanders. Swinney said that Charleston is a fun guy to watch play football. He said Charleston will always be around the ball and can play either safety spot. He has some versatility and they can move him around a little bit.

*Swinney said that defensive tackle Demonte Capehart is going to be special, but it’s going to take a little bit of time.

*He said his punt returners are taking a lot of pride in their craft.