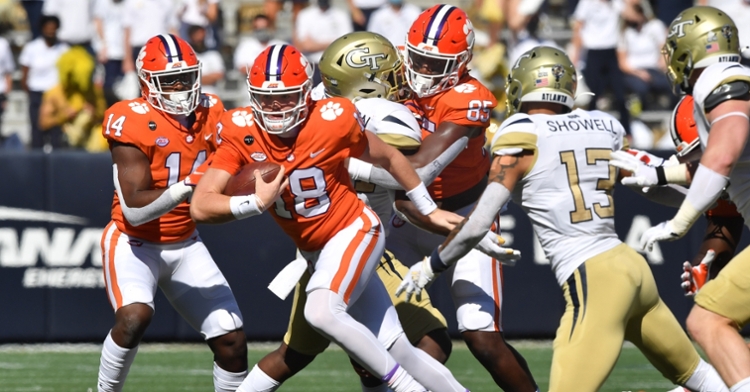 Hunter Helms grew up making the trek from Columbia to Clemson for Tiger football games, and as a youth imagined one day wearing the Paw and running down The Hill and playing in front of the orange-clad faithful. Hard work has made that dream come true.

Helms made history this past Saturday when he became only the third quarterback who joined Clemson as an original walk-on since 1954 to throw a touchdown pass, joining Nick Schuessler (three touchdown passes in 2016) and Donny McElveen (one in 2010).

Helms finished five of seven passing for 74 yards and two touchdowns in the 73-7 victory over the Yellow Jackets. Helms was able to get that much action due to injuries to DJ Uiagalelei and Taisun Phommachanh.

“It was great. It was a dream come true. I hate it for D.J. and definitely Taisun,” Helms told the media Monday. “I kind of wasn't expecting it, but I always try to stay ready as much as I can. I try to prepare like the starter and that's my mindset and that's how I take it every day. I'm just blessed to be able to out there and do my best.It's tough. I enjoy the challenge. I'm still learning it to this day.”

Helms says the college game is starting to slow down for him.

“My teammates – Trevor (Lawrence), D.J. and Taisun - they help me a lot. It's really slowed down since I've gotten here. When I first got here, it was really fast, but it's slowed down a little bit,” Helms said. “I still have a lot to learn, but I'm just taking it day-by-day and trying to learn as much as I can from my teammates. Like I told my family, running down The Hill was probably more nerve-wracking than going in the game. It kind of settled me down, getting those few snaps against The Citadel. I was calmer against Georgia Tech, but I'm just extremely blessed to get one snap. It's a dream come true. It was exciting.”

Helms listens and learns from Lawrence.

“I just try to learn as much as I can every single day from that guy. I've looked up to him since I heard about him when he was a junior in high school,” he said. “I just try to ask as many questions as I can because he's been there. He's so intelligent. It's crazy to watch him practice and try to learn from him as much as I can. The little bit I can get from it will help my game. It was kind of crazy at first. It has kind of settled in now and he's like a big brother to me. At first, it was kind of surreal.”

Helms had the opportunity to earn a scholarship and play elsewhere, but Clemson is where he wanted to call home.

“My family and I talked about it a lot and prayed about it. I just feel like this was my calling,” he said. “This has always been my dream school. I've been coming up here since I was two or three. It just felt right. I love the coaching staff and I felt like this was where I needed to go. I'm glad I came here and I wouldn't change it. I would do it over again. It's fun, honestly. I just do whatever I can to help the team. I go over there on scout team and try my hardest to give the defense a good look and then I come over to the offense and try my best to learn and make myself better as a quarterback. I'm just trying to help the team as much as I can. Wherever the coaches want me to be that day or that period in practice, I just try to do it and go full speed. That's kind of how I look at it.”

Helms grew up in a divided household – his brother and father were Gamecock fans – but now the entire family rocks the orange on game day.

“All of that fear thumb stuff, it was kind of fun. My brother is a big Carolina fan. They are big Clemson people now,” he said. “Blood is thicker than water, they say. It was fun just talking crap to my brother and my dad.”