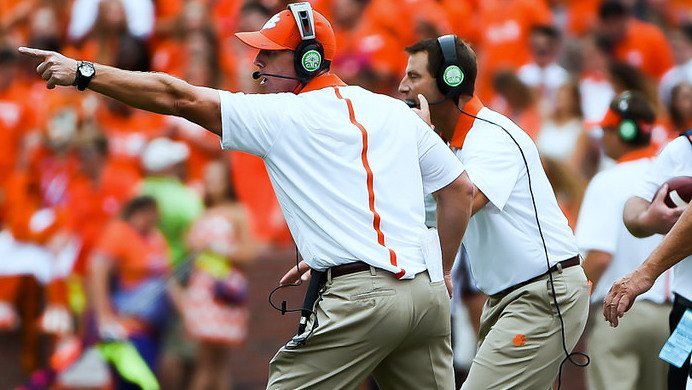 Swinney and Venables make for a winning combination

SUNSET – When you know, you know.

In early January of 2012, Clemson head coach Dabo Swinney worked the phones to find a replacement for former defensive coordinator Kevin Steele. Steele and Clemson parted ways after the 2011 season. The Tigers finished No. 71 in the country in total defense and No. 81 in scoring defense, allowing 29.29 points per game.

Clemson still won its first ACC title and advanced to its first BCS bowl. But against West Virginia in the Discover Orange Bowl, the Tigers surrendered 70 points, the most points ever scored by a team in any bowl game, prompting the school to part ways with Steele.

One of Swinney’s first phone calls was to Venables. Venables interviewed for Clemson’s head coaching job in 2008 before the Tigers eventually hired Swinney, but had only watched the Tigers from afar.

“When I watched Clemson, I thought there was an innocence about it that reminded me of my younger days getting into coaching when I was back at Kansas St.,” Venables told TigerNet a few weeks ago. “I saw a similar kind of innocence. My image of Clemson was 'success with innocence' and there was a tremendous potential that I was attracted to.”

Venables was co-defensive coordinator at OU from 1999 to 2003, before taking over the defensive playcalling after Mike Stoops left. In early 2012, however, then Sooner head coach Bob Stoops brought his brother Mike back to the staff, relegating Venables to being a co-coordinator again.

That’s when Swinney reached out to Venables, and the two had a phone conversation that lasted well after midnight. Realizing that the two could probably talk all night, Swinney told Venables to hop on a plane and be in Clemson the next day. The rest is history – Venables was hired to replace Steele and the Tigers are 72-11 since he arrived on campus.

Venables said his connection with Swinney was immediate, as was the lure of coaching at a place like Clemson.

“The quality of the place and the people and the possibilities were important to me. I just think he is a relational guy,” Venables said of Swinney. “I am a relational, touchy-feely guy, and the more you know me and the more comfortable I am around you the more I will open up. I have my guard up a little more. I like to have fun and I like to laugh. I like to laugh every day. I think he is a relational kind of guy that is high on life and perpetuates the positive. I've watched those relationships he has had with players and how he led the team and I was attracted to that. I thought there was an innocence about it.

“And then you have an emotional, fearless, wear-it-on-the-sleeve leader that I could connect with. That was just on TV before I ever talked to him. We got on the phone and it was (snaps fingers) very easy. You know when it is a fit. And then you come and visit this place and it's easy to fall in love if you appreciate things the way I do.”

Venables said life at Clemson is about more than football, and that is important when you are making a decision that impacts your family – he had four kids and a wife to think about.

“Football is football and it is important that you have a good quality of life and believe in the people that work around you,” he said. “You want to have a chance to be successful every time you go out on the field. In a performance-based profession, you had better believe that is important. When I went through the decision-making process, at the end of the day it had nothing to do with Oklahoma and had everything to do with Clemson. It was really about closure at Oklahoma and new beginnings and the fear and the frightfulness and the uncertainty that Clemson presented.

“As exciting as it was, in this profession you usually know people. Here, I knew no one. So I was a little bit scared for my family. I was fortunate in two jobs, and the one thing that I had at both jobs was loyalty. Fearless leaders and loyalty. So I was getting out of my comfort zone.”

Venables was, as he said, out of his comfort zone. But someone else had the wheel as he made the drive of his life.

“There is always going to be a transition, and life is hard, and I felt like I flipped my life upside down. In some ways, it makes you uncomfortable,” Venables said. “But there is no question that helped me as a coach and as a husband and a father and as a Christian. There is no doubt that it was God's will. You know you have the correction in the steering wheel in your car, and if you don't put the blinker on it won't let you go to the right or to the left, it keeps you in that lane. That was really one of those moments for me in my life. It's been so much better than I could have ever hoped.”