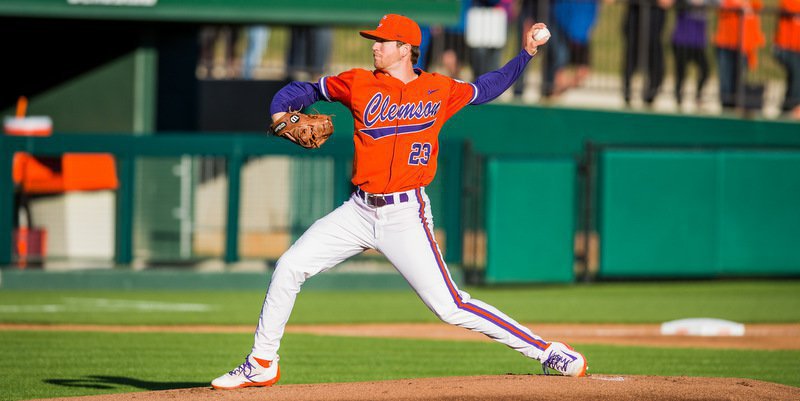 CLEMSON – Outstanding pitching and timely hitting have made for a winning recipe this season, and No. 5 Clemson continued to cook at home with a 12-1 win over Virginia Tech on a chilly night at Doug Kingsmore Stadium Friday.

Starter Charlie Barnes improved to 4-2 in earning the victory, pitching 7 2/3 innings, giving up just one run on four hits with two walks. Barnes also tied his career-high with 11 strikeouts. Logan Davidson had four hits, including a homer, scored three times and drove in two runs.

Two singles and a walk loaded the bases with two out in the bottom of the second, and a wild pitch plated Davidson with the game’s first run and a 1-0 Clemson lead.

The Hokies, who entered the night leading the NCAA in home runs, got number 58 when Joe Freiday lined a shot over the wall in left in the third that tied the score at 1-1.

Davidson returned the favor in the bottom of the inning, launching 1-0 pitch over the wall in right-center and near the indoor batting cages for his fifth home run of the season and Clemson held a 2-1 lead after three innings.

The Tigers loaded the bases again in the fourth but again could only muster one run. Jordan Greene, Grayson Byrd, and Chase Pinder all singled to load the bases with one out, and Reed Rohlman followed with a sacrifice fly to left that scored Greene for a 3-1 lead.

Andrew Cox singled with two out in the fifth and scored on Robert Jolly’s double off the wall in right-center for a 4-1 Clemson lead.

The Tigers put the game out of reach in the seventh, and Davidson once again got things started. Davidson laced a one-out single up the middle and advanced to second on a Cox walk. Jolly bounced into a fielder’s choice that forced Davidson. Greene then hit a short pop into left that fell in between three Tech defenders for a double, and both runners scored for a 6-1 lead.

An error leading off the bottom of the eighth opened the floodgates. Pinder reached on an error by the third baseman to open the inning, moved to second on a single by Rohlman and both runners moved up a base on a passed ball. That brought up Seth Beer, who tomahawked a single to right field that scored Pinder. Beer took second on the throw back to the infield, and Rohlman scored on Chris Williams’ single to left for an 8-1 Clemson lead.

Next up was Davidson, who cranked a single into right that scored Beer, with Williams advancing to second. A passed ball moved both runners up one base, and Cox walked to load the bases. Jolly bounced into a fielder’s choice that scored Willams to make it 10-1, and the Tigers added two more runs on two wild pitches.

Clemson vs. Virginia Tech game one box
Comment on this story